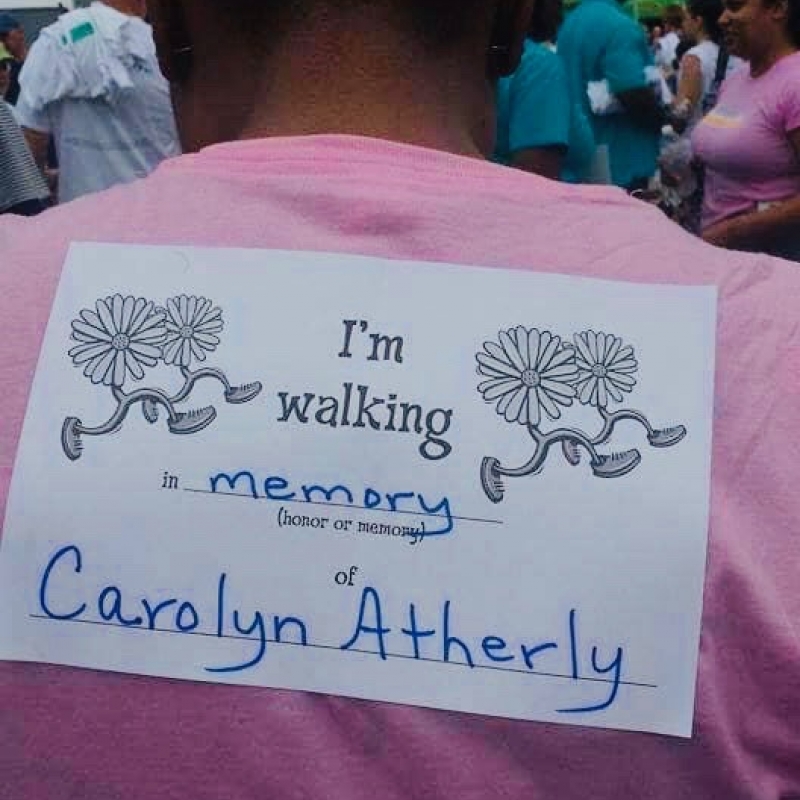 Each year since, Amber, 41, gathers family and friends together to celebrate and honor “Mommie” — as she and her brother Loren affectionately called her— at the annual Annual Gail Parkins Memorial Ovarian Cancer Walk & 5K Run held in Raleigh, North Carolina.

Amber moved to Raleigh 24 years ago to attend North Carolina State University after having spent her childhood in New Jersey. Her mother Carolyn had planned to join her in Raleigh when she retired, but never got the chance.

“Sometimes it hurts to remember her, but I was so proud of her, it makes me feel good to remember, too,” said Amber. “She always showed such compassion, determination and selflessness for the things she believed in and loved.”

A 1965 graduate of the University of Connecticut with a BS in History, Carolyn had begun her career as a social worker at an Atlantic City non-profit that provided support, assistance and aid for low income families. For 40 years, until her death, she served as director for Head Start in Atlantic and Cape May counties. She also occupied many different positions on the Child Care Advisory Council of New Jersey, served several terms as the president of the New Jersey Association of Head Start Directors, and was a member of the missionary society at her local church, St. Paul C.M.E.

“My mother possessed a strong love and admiration for children and because of this, she spent the majority her life ensuring that all children regardless of their background, race or gender had an equal opportunity in this world to succeed and she felt that an effective way to ensure this was through providing early childhood education,” shared Amber.

“As a teenager I remember sitting at the table and watching my mother write proposals, year after year, for federal grants and funding for her program,” she continued. “The first time I ever witnessed her writing a proposal I asked her if the grant money was also used for the incomes of the people who worked in the program. ‘If so,’ I said, ‘Please write your salary so we will be rich!’ She smiled and said, ‘I have not given myself a raise in over four years. I make sure that my employees are well taken care of with appropriate salaries and that the majority of money goes to help the children in the program have as many resources as possible.’”

The mother-of-two and grandmother-of-four was first diagnosed with ovarian cancer in February 2009 — departing from this world not a year later, at the age of 66, on January 1, 2010.

For about two years before diagnosis, she’d suffered abdominal pain, bloating, constipation, sometimes diarrhea, nausea and post-menopausal vaginal bleeding. Pelvic exams and a pap smear didn’t yield anything abnormal. The actual tumor could not be felt.

Then, when fluid began to build up her abdomen causing shortness of breath and an ultrasound revealed a growth of unknown origin, her surgeon at Cooper University Hospital in Camden, New Jersey, performed exploratory abdominal surgery. She found a mass the size of a basketball encapsulating Carolyn’s entire right ovary. Carolyn underwent chemotherapy before and after surgery to remove the mass.

By June 2009, her cancer under control, she was full of energy. A recurrence of stomach pain, diarrhea and nausea three months on was diagnosed as likely colitis. Not long after, while battling a bowel obstruction caused by rapid metastasis, Carolyn succumbed to septic shock in the hospital and passed away.

“I remember the physicians there asking me if I wanted to make her a DNAR (Do Not Attempt Resuscitation) and me saying, ‘No, she told me if things ever began to look like they were going bad, to fight until the end.’ The physicians and nurses at Cooper helped me fight until there was nothing else we could do to keep her alive. For them I am grateful.”

In life, Carolyn was a collector of angels. They’d been a familiar sight in the family home since Amber was a little girl. “Mommie” especially adored the archangel Gabriel, the heavenly messenger. In fact, she’d nearly named Amber “Gabrielle” in his honor.

So, when Amber first signed up for the Gail Parkins Memorial Ovarian Cancer Walk & 5K Run in 2010, about eight months after her mother’s death, choosing the name Carolyn’s Gabriels for her fundraising team seemed just right.

“We, Carolyn’s Gabriels, are her angels on earth, and we spread the word to all about ovarian cancer, just as Gabriel spread the word, in the Bible,” Amber explained. “We are her messengers sent to help protect other women from ovarian cancer through education and awareness.”

“I still miss her every day and it never really gets any lighter, but I know I was so lucky to have a mother as good as her for the time I did, and I also know she is no longer suffering and no longer in pain and that helps with the thought that she’s gone,” Amber wrote Bacheler. “I really do appreciate the fact that you started this walk. It has become a ritual and each year it makes me feel closer to her.”

Bacheler lost her mother Gail Parkins to ovarian cancer in 2002, so she gets it. In fact, she started the event to help her manage her grief. In addition to raising more than $4 million for ovarian cancer research, the annual event has remained a special gathering place to honor loved ones lost and support survivors alongside others with shared experiences.

Though this year, the community spirit will be virtual, it’s notes like these that inspire Bacheler to keep hosting the event 18 years on.

“This sweet person made my day,” said Bacheler.

It’s not too late to form a NEW team , join an EXISTING team , form your team again, or participate as an individual. Support team Carolyn’s Gabriels. Learn more about tracking your progress this month. Watch the educational symposium at 9:30 a.m. on Sept. 26. (Zoom details, TBA)

Form a NEW team :: Join an EXISTING team :: Form your team again :: Participate as an Individual

Via Zoom. Zoom details will be provided to all registrants.

If you are not registered and wished to see the speakers' talks, we hope to make a recording available to the public a few days after the event.