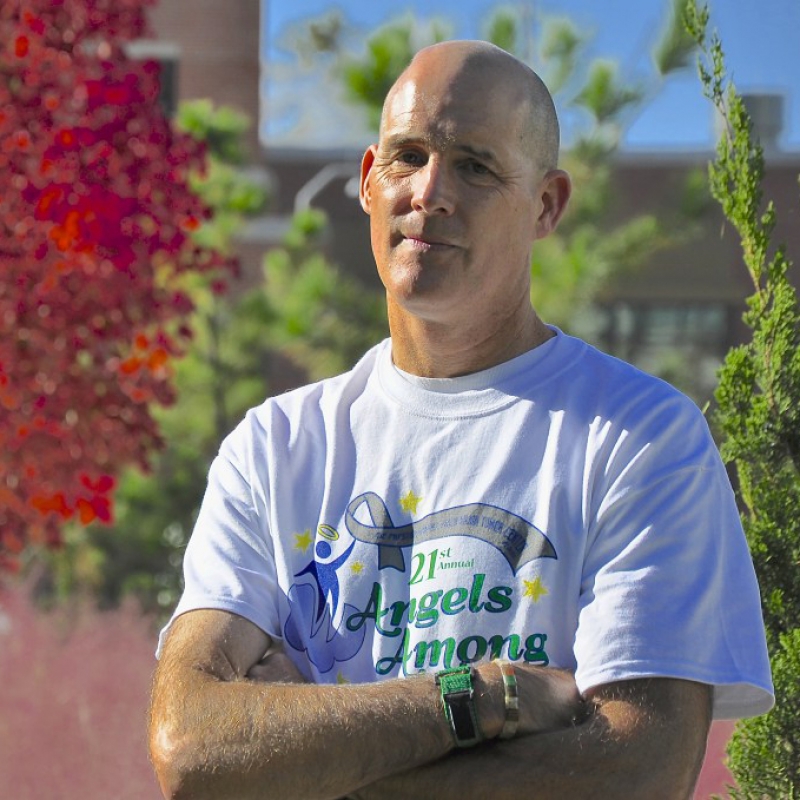 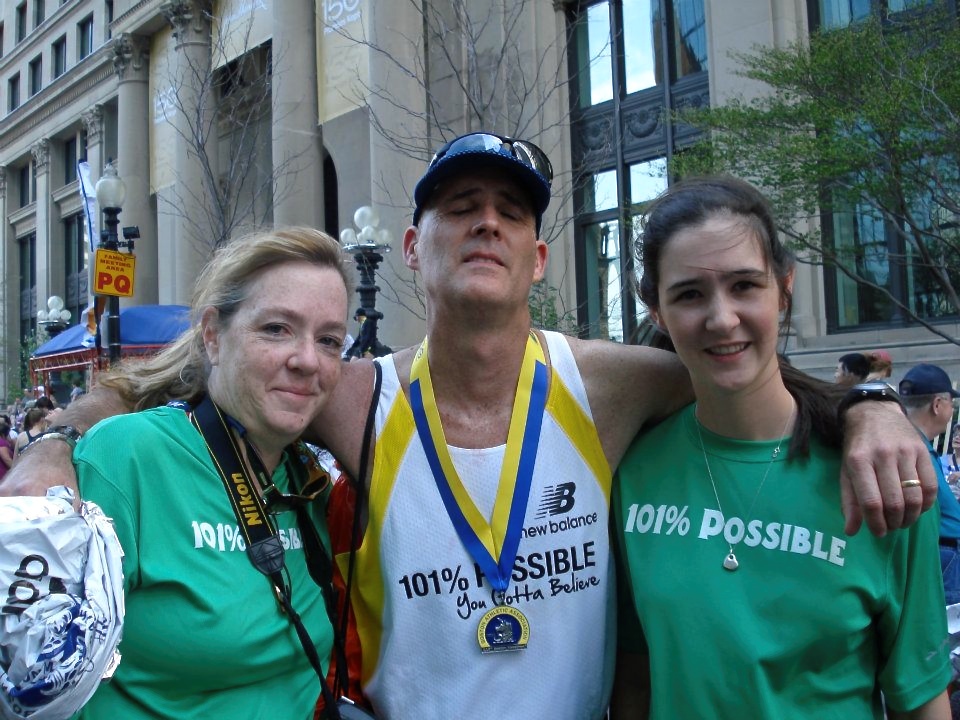 One year to the day after his second surgery and two days after taking his last dose of chemo, Tom O’Donnell completes the 2014 Boston Marathon on April 21. Utterly exhausted, O’Donnell is flanked by his biggest fans, his wife, Mary, and daughter, Kerry.Marathon runner Tom O’Donnell says he doesn’t run to go fast. He says he has a battle on his hands and he’s got to be in the best shape possible if he’s going to live life to the fullest.

O’Donnell, 51, fights a formidable foe. After an MRI in 2009, O’Donnell’s neurologist told him he had a malignant mass on the front, right lobe of his brain – a grade 2 oligodendroglioma.

In July 2009, he was referred to Duke neurosurgeon Allan H. Friedman, MD.

“Before surgery, Dr. Friedman warned me that I might lose the use of the left side of my body,” O’Donnell remembers. “I wanted to use my left side as much as possible before going under the knife, so I took up running for the few weeks leading up to my surgery.”

A few hours after surgery, O’Donnell awoke in the ICU. He wiggled his fingers and then, his toes. Everything worked as it should.

“I realized that all that could go wrong, didn’t,” says O’Donnell, who lives in Apex with his wife, Mary, and daughter, Kerry. “I felt like the luckiest guy on the planet."

Unable to completely remove the tumor, over the next several months his doctors monitored O’Donnell’s brain for regrowth. Grateful to be alive and equally glad to be able to move, O’Donnell took to running with gusto. It wasn’t long before he was running five days a week.

“I began training for my first full marathon, the American Tobacco Trail in Raleigh, during the fall of 2009,” O’Donnell says. “But three weeks before the run, I had a frightening grand mal seizure.” 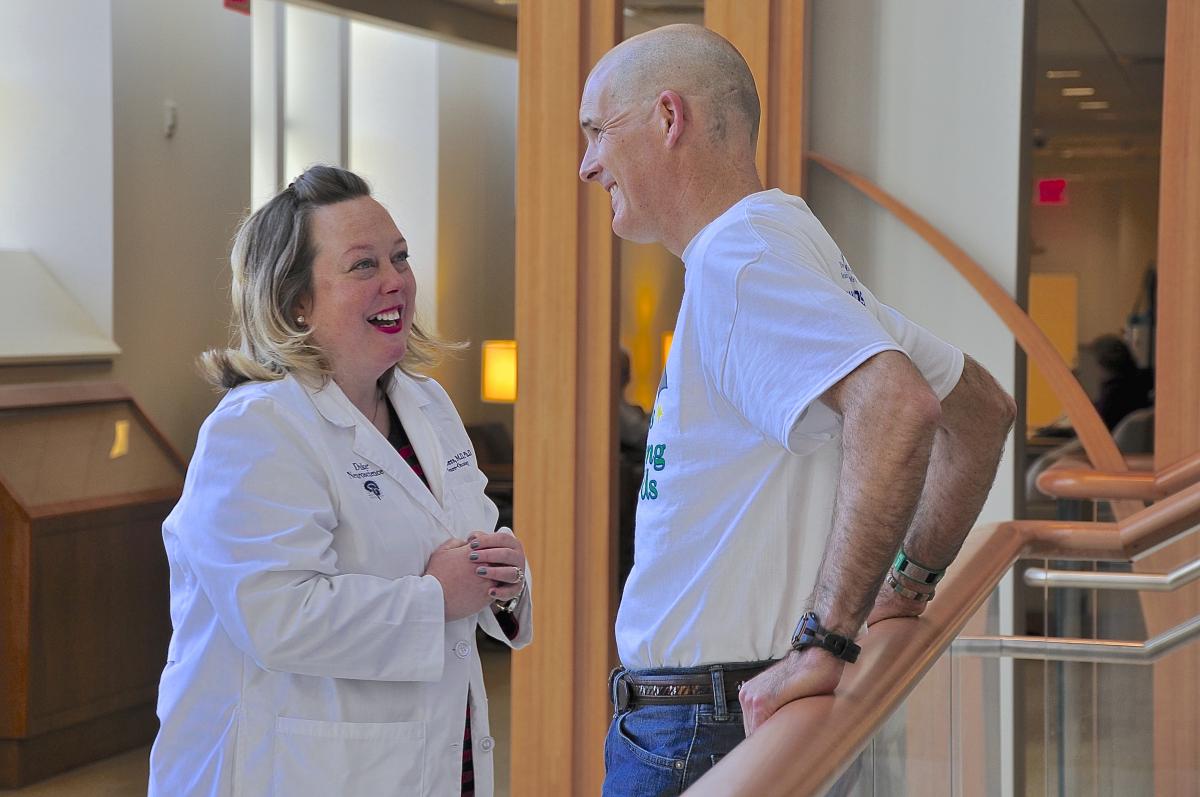 While on a recent visit to the Duke Cancer Center, O’Donnell takes a moment to chat with his neuro-oncologist Katy Peters, MD, PhD.Shaken, O’Donnell told his neuro-oncologist Katy Peters, MD, PhD, that he would be very disappointed if he could not run in the marathon. Nevertheless, he assured her that he wasn’t going to be stubborn. He would follow her advice.

“Dr. Peters looked at me for a moment,” says O’Donnell. “Then, rather matter-of-factly asked me to email her with the directions to the marathon. When I crossed the finish line on the day of the run, there she was – waiting for me along with my family and friends.”

A biopsy would reveal that O’Donnell’s tumor had not worsened. Doctors adjusted his medications to help prevent future seizures. He had completed his first 26.2-mile trek in a respectable four hours and 19 minutes.

In 2011, O’Donnell qualified for the 2012 Boston Marathon, the world’s oldest annual marathon and recognized as the world’s best-known road racing event. He completed his first Boston Marathon in temperatures exceeding 90 degrees. His passion for distance running ever increasing, O’Donnell continued to train, participating in numerous marathons, near and far.

However, in March 2013 another biopsy showed a new growth, this time stage 3. O’Donnell would now require both surgery and chemotherapy. His surgery was scheduled for April 22, 2013, just a few days after The Preston Robert Tisch Brain Tumor Center’s Angels Among Us 5K event. Nevertheless, O’Donnell was at the starting line ready to run with his fundraising team, 101% Possible. That year O’Donnell and 101% Possible raised an amazing $38,000 to help support brain cancer research at Duke. In all, O’Donnell and his team have raised $51,000 for The Preston Robert Tisch Brain Tumor Center.

O’Donnell had to undergo chemotherapy for the better part of a year. Despite its effects, O’Donnell continued to run and participate in marathons. In fact, on April 21, a year to the day after his second surgery and two days after taking his final dose of chemo, O’Donnell completed his second Boston Marathon in 3:18:38.

“The side effects related to chemo could not keep me from doing what I wanted to do,” says O’Donnell, who works as a manager at a drugstore. “I truly believe being fit and active has enabled me to better manage the unwelcome side effects caused by chemotherapy. My new found stamina helped me get through surgeries with less recovery time. For me, running has become a part of my treatment.”

O’Donnell’s neuro-oncologist believes each individual will navigate a diagnosis of cancer and the resulting challenges in his or her own way.

“Tom’s experience with his cancer diagnosis points out how each patient has a unique journey and has unique obstacles to overcome,” says Peters, assistant professor of neurology. “Running has been an important part of his journey, but I have learned that it can be different things or experiences to each patient. Therefore as a physician we have to be there not only to give radiation, chemotherapy, and surgery but also to support our patients physically, mentally, and emotionally through their unique journey.”

“I never take for granted the things I can do,” O’Donnell says. “I don’t do this to run fast; I do it because I can, and I plan to continue running for as long as I am able.”

O’Donnell doesn’t give much thought as to what the future may hold. He doesn’t ask too many questions either. He’s content with today. He is buoyed by the encouragement of the many people with whom he’s crossed finish lines. Nearly all have been inspired and motivated by his story of optimism, grit and perseverance.

“After my first surgery, Dr. Friedman told me to go and live the rest of my life,” O’Donnell recounts. “That was enough for me – and it still is.”

Living out his life to the fullest, O’Donnell’s plans will take him back to Angels Among Us and the American Tobacco Trail in the spring and to Boston, in early summer. Ask him what comes next, he simply replies, ‘Gotta run.’”

Note: In 2014 Angels Among Us raised more than $2 million to support the Preston Robert Tisch Brain Tumor Center at Duke. The 2015 Angels among Us 5K and Family Fun Walk will take place Saturday, April 25. For more information, visit www.angelsamongus.org or email angelsamongus@duke.edu.