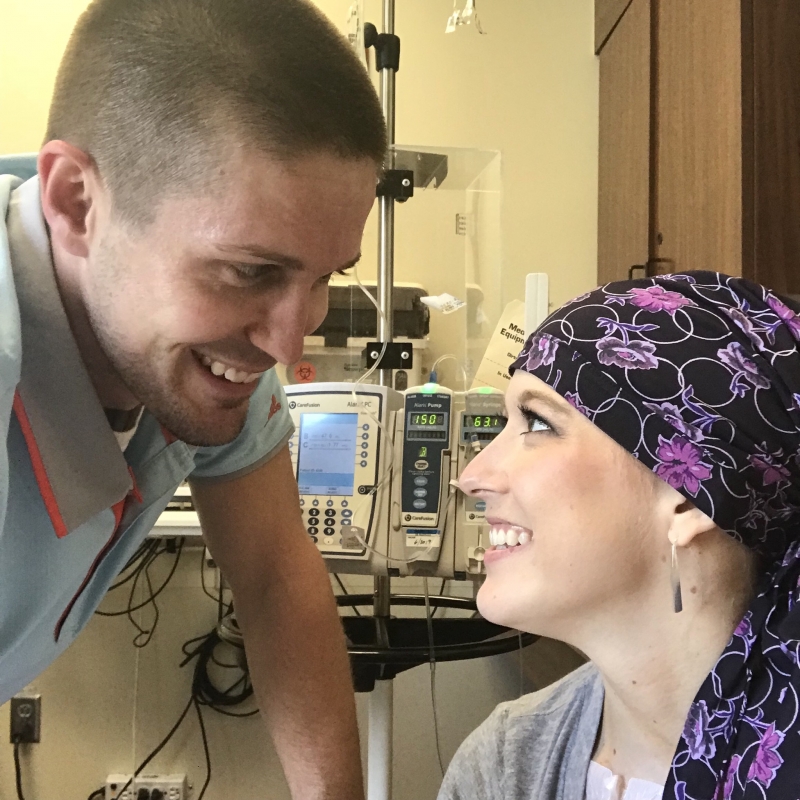 Kortne Waginger has just turned 30, but she has already endured more medical procedures than most people do in a lifetime.

At age 27, she was diagnosed with cancer for the third time. That diagnosis led her to Duke for brain surgery. Her Duke doctors suggested genetic testing, which revealed a rare genetic condition that predisposes her to cancer — Li Fraumeni Syndrome (LFS).

The news was shattering. But Waginger says that without the testing and LFS diagnosis, she might not be here today.

At just nine years old, Waginger, of Cullowhee, North Carolina, was treated for liposarcoma, a rare connective tissue cancer. That experience inspired her to become a nurse.

She was diagnosed with a second cancer—melanoma—when she was 24 and working as a nurse on a stepdown unit (an intermediate unit between intensive care and general care). She got surgical treatment near her home and moved on. She married her fiancé, Brigham Waginger, a men's basketball coach at Western Carolina University. She began working as an oncology nurse

But in October 2017, Waginger began having tingling in her right arm. She told herself it was  a side effect from her recent flu shot.

But one morning, she was driving to work, and as she tried to step on the brake, her right foot wouldn’t move. That wasn’t something she could ignore.

An MRI revealed a brain tumor. That same night, she had a seizure and had to be rushed to a hospital.

The diagnosis led her to Duke for the first time, where she had an awake craniotomy. Peter Fecci, MD, PhD, associate professor of neurosurgery, and other providers talked to her throughout, to ensure the surgery was not harming speech and other crucial functions.

Afterward, her right side was numb, and she had to relearn basic skills such as typing, walking and driving. Today Waginger still has no feeling in her right leg or foot. She uses her left foot to drive.

“I know driving with your left foot seems sketchy, but it works for me!” she says. “I know that if I hadn’t been treated at Duke, I wouldn’t be doing as well as I am now.”

Fecci recommended that she undergo genetic testing to find out why she had had three primary cancers.

“If Dr. Fecci had not recommended this, my life right now would look very different,” she says.

The testing revealed that she has Li Fraumeni Syndrome (LFS), which means she has a mutation in the TP53 gene, which produces the P53 protein, known as the “guardian of the genome.” Her body has a reduced ability to control cell growth and division that can lead to cancer.

Or as Waginger puts it, with her characteristic sense of humor, “I am a well-oiled cancer machine.”

Because of the LFS diagnosis, Waginger underwent intensive cancer screening, including a colonoscopy and MRIs, at Mission Hospital, near her home. (Because of her increased susceptibility to DNA damage, any screening or treatment screening that involves radiation, such as x-rays, are not recommended for her.)

This screening revealed cancer number four—colon cancer. She came to Duke for surgery. Then her oncologists at Duke and at Mission Hospital coordinated it so that she received 12 rounds of chemotherapy infusions near her home.

In fact, the nurse manager of the outpatient center where Waginger received the infusions was Waginger’s best friend since second grade, Emma Hogsed.

She was in Waginger’s wedding, and also by her side through these treatments.

In January 2019, Waginger had yet another setback. An MRI revealed a small spot where the brain tumor has started to grow again. This time, surgery is not an option, because the risk of endangering vital functions would be too great. And the LFS diagnosis means that radiation treatment is also not a good idea.

Waginger’s doctors recommended a non-standard oral chemotherapy. She takes these pills every six weeks and will do so indefinitely, depending on how the tumor responds.

Just two months after that news, screening revealed breast cancer. Waginger came to Duke for a double mastectomy and reconstruction.

“I have had an unimaginable amount of medical mayhem in the last two years. Too much to even process some days,” Waginger says. “But I know without a doubt that without the Li-Fraumeni diagnosis, the colon cancer and breast cancer would have not been caught at a stage that was curable.”

"From the moment I came through the doors at Duke Cancer Center, I felt more comfortable than I have been anywhere else. I know that I'm getting the best care that I can get in the nation, and that's why I'm here,” she says.

The multidisciplinary team approach at Duke is a big part of what makes it an ideal place for people with complex syndromes like Li Fraumeni to get care.

“Constant coordinated communication between experts in every field is a big differentiator for us. We work together to make the experience seamless for the patient,” Fecci says.

Waginger says she'd like to see as much as possible done to understand LFS.

“The diagnosis of Li-Fraumeni Syndrome has broken my heart into a million pieces, but it has also opened my eyes to a clearer vision,” she says. "No two patients with LFS will have the same tumor makeup or have the same cancer diagnoses. This makes research regarding our condition more complex and challenging. And it means that it's crucial for people to support research."

“There’s a lot of ifs,” she says. “We’re not promised tomorrow. None of us are.”

She and her husband spend as much time together as they can.

“We try to enjoy every single moment, and enjoy all our family and friends,” she says. “Cancer has taught me how blessed I am. There’s so much to be thankful for.”