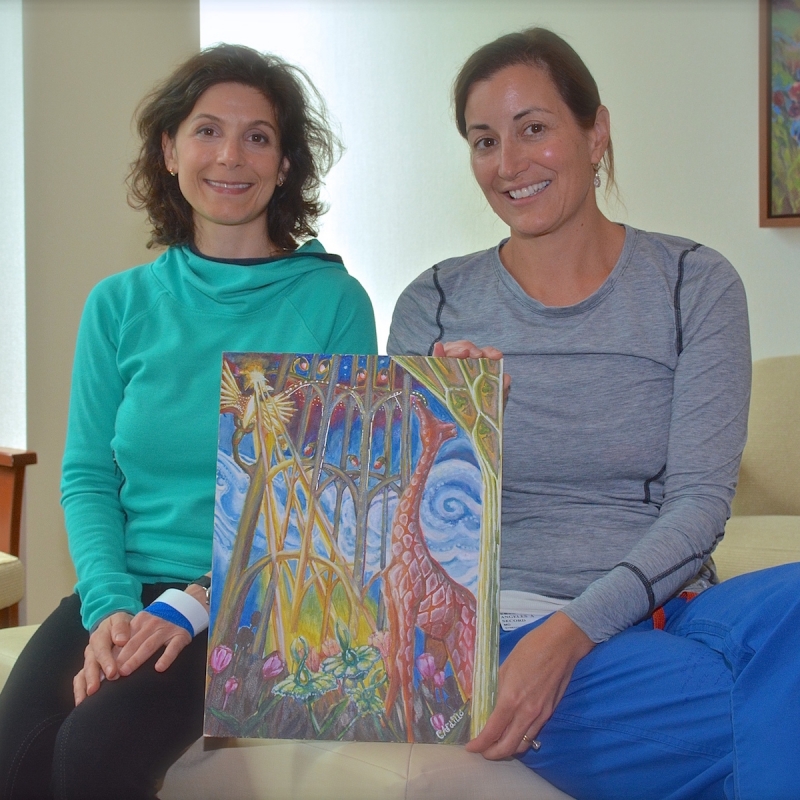 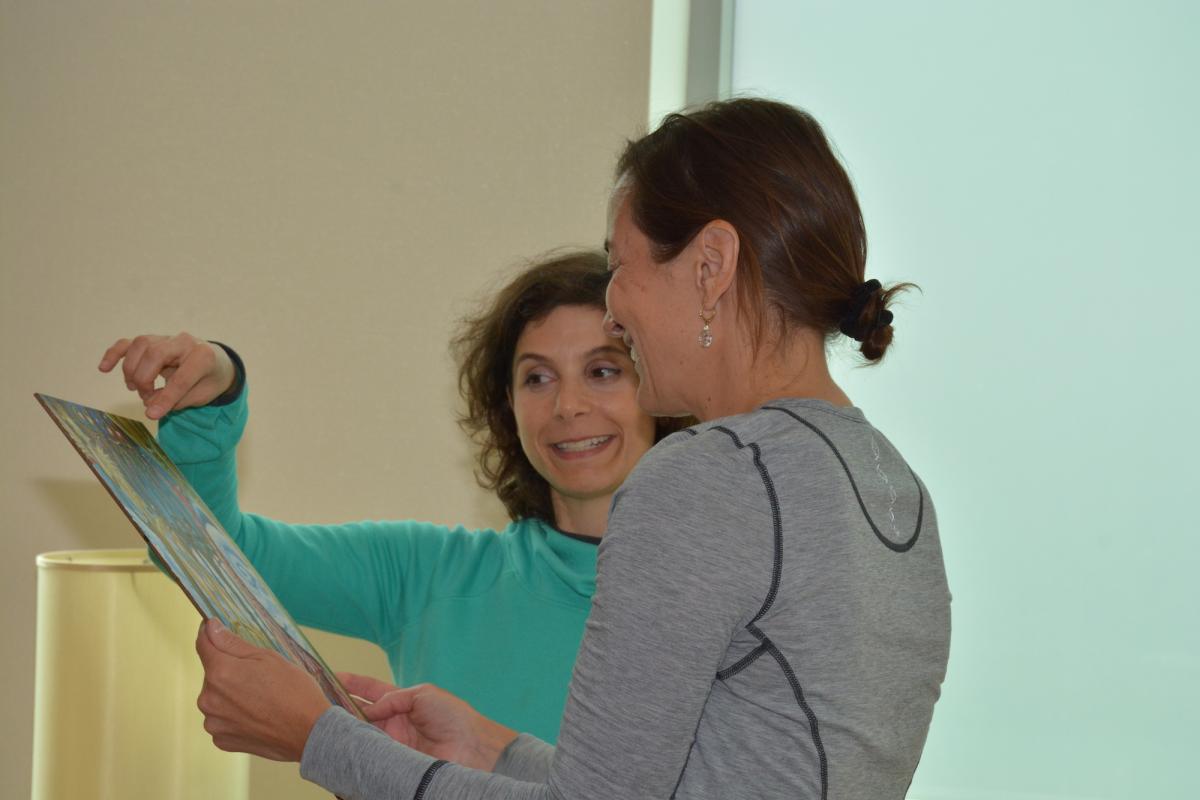 Julie Cardillo, Raleigh, points out to her surgical oncologist Angeles Secord, MD, the meaningful symbolism captured her artwork. Cardillo, who is being treated at Duke for both ovarian and endometrial cancers, presented the piece to Secord in appreciation of her surgical care.When Julie Cardillo was diagnosed with cancer she turned to a soothing sanctuary where for most of her lifetime she has best been able to express the emotions within. With richly pigmented tools of the trade, Cardillo began to detail her journey with careful sweeps on the blank canvas before her.

A native of New Jersey, Cardillo, 39, moved to Raleigh, North Carolina, seven years ago after accepting a position as a studio art instructor at Ravenscroft School, a private school in Raleigh founded in 1862.

In 2009 Cardillo arrived she had a routine exam in which her gynecologist discovered a polyp on her cervix which was removed. According to Cardillo, she went on to experience spotting. Another polyp was discovered in her uterus. Her doctor was not overly concerned and told her it was “probably nothing.” She recommended that at some point Cardillo have it removed.

“I’ve always been afraid of needles,” said Cardillo. “Since my doctor didn’t indicate any urgency, I put off the procedure.”

After some time, however, Cardillo’s anxiety began to heighten. Cardillo’s mother had been diagnosed with breast cancer at 50 and with that in the back of her mind, Cardillo began to look for other options.

“For multiple reasons I decided to go straight to an oncologist for a second opinion,” Cardillo said. “After some online searches, I found Dr. Secord. Upon meeting, I immediately felt comfortable with her.”

Angeles Secord, MD, is a gynecologic cancer specialist with the Duke Cancer Institute and associate director for clinical research. After an exam, Secord recommended minimally invasive surgery to remove the polyp.

“It was my birthday,” remembered Cardillo. “As luck would have it, I had an art exhibit scheduled for the day after surgery. I knew the procedure would be rather unpleasant but the exhibit was certainly something I could look forward to.”

Distracted by her exhibit, Cardillo didn’t have much time to be overly concerned. However, days later she was stunned to learn that the biopsy had come back positive.

“I almost passed out,” recounted Cardillo. “I was speechless. Nothing prepared me for this kind of news.”

Cardillo was scheduled for a radical hysterectomy.

“Fortunately, Dr. Secord had found my cancer at its earliest stage,” Cardillo shared. “Even better, the cancer had not spread to my lymph nodes. Dr. Secord also discovered I had endometriosis, which in some cases can lead to cancer.”

Led by director Andrew Berchuck, MD, Duke’s gynecologic oncology program is one of the most comprehensive cancer treatment and research programs of its kind. Duke specialists are leaders in adapting laparoscopic and robotic surgical approaches to the treatment of gynecologic cancers. 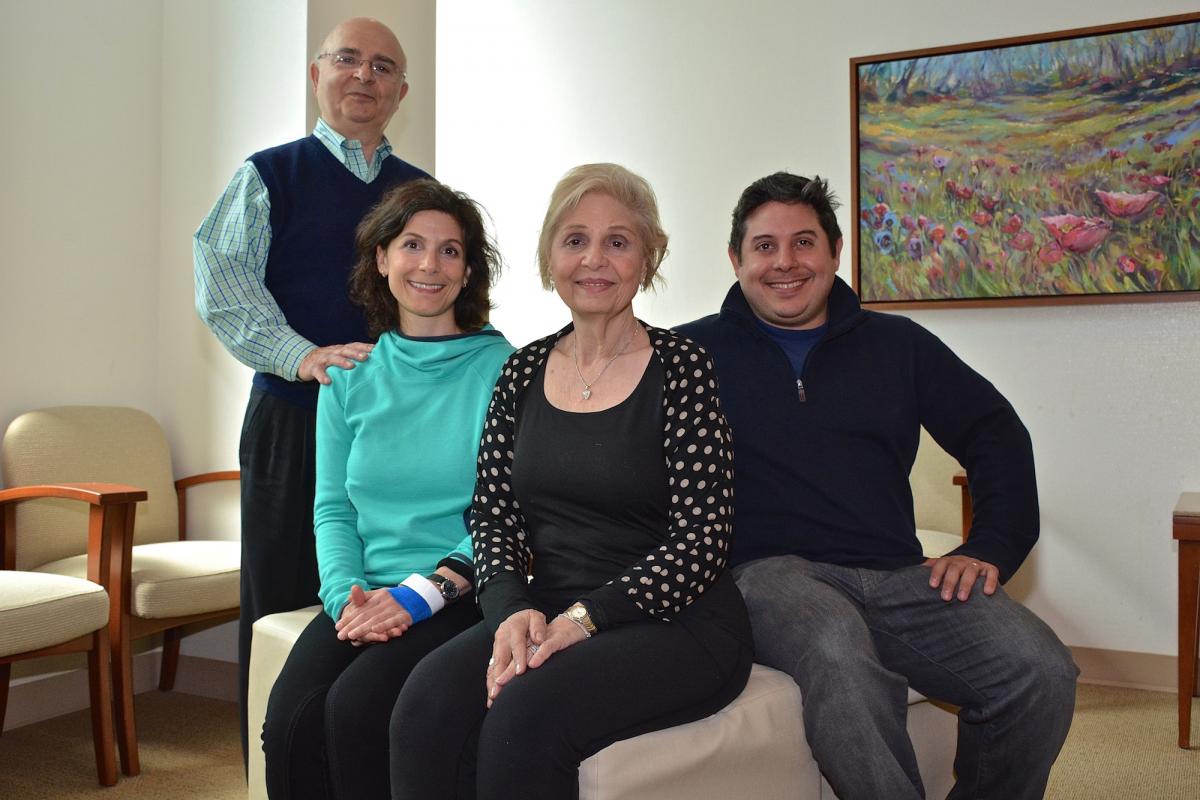 Julie Cardillo poses with her father, Mark, and mother, Lois, and her brother, David. Mark and Lois Cardillo live in New York City. David Cardillo resides in Philadelphia, Pennsylvania.Today, Cardillo is undergoing chemotherapy. At a recent check-up, Cardillo presented to Secord a framed painting – one in which she had interpreted on canvas what was once an unwelcome journey transitioning into a period of renewed hope and thankfulness. The canvas, filled with whimsical imagery, and bright hues, conveyed to her oncology specialist, Cardillo’s deep gratitude. The design also includes meaningful symbolism speaking to ovarian cancer awareness and the place where she receives her care, the Duke Cancer Center.

“It is incredibly special that Ms. Cardillo created a painting detailing her story,” said Secord, who hung the illustration in her clinic for all to appreciate. “Her vision is very inspirational for me. I think the painting has a strong message for all of our patients. Ms. Cardillo’s creation has surrealistic elements, all of which communicate hope.”

Perhaps the biggest standout is a giraffe, which takes up a sizable portion of the composition. Cardillo couldn’t have known in advance but as it turns out, the giraffe is Secord’s favorite animal. She added the giraffe to the piece as she considered it a visual symbol for the cervix, which is the neck of the female reproductive system.

“Yes, I do love giraffes,” Secord acknowledged. “They seem like such kind and gentle animals. The slope of the neck is so elegant and graceful.”

Through her journey hope and gratitude have been tested. Cardillo indicated there have also been lessons learned. She said it’s vitally important that we pay attention and “listen to our bodies.” Cardillo has no regrets; she’s glad that she was a bold advocate for her own health.

“Even if it is cancer, that doesn’t mean it’s the end,” she said. “There are many great doctors and lots of support. I am fortunate to have my family, school community and those heading up the Duke Cancer Patient Support Program in my corner. Fight for your life. I’ve discovered I am much braver than I ever thought.”