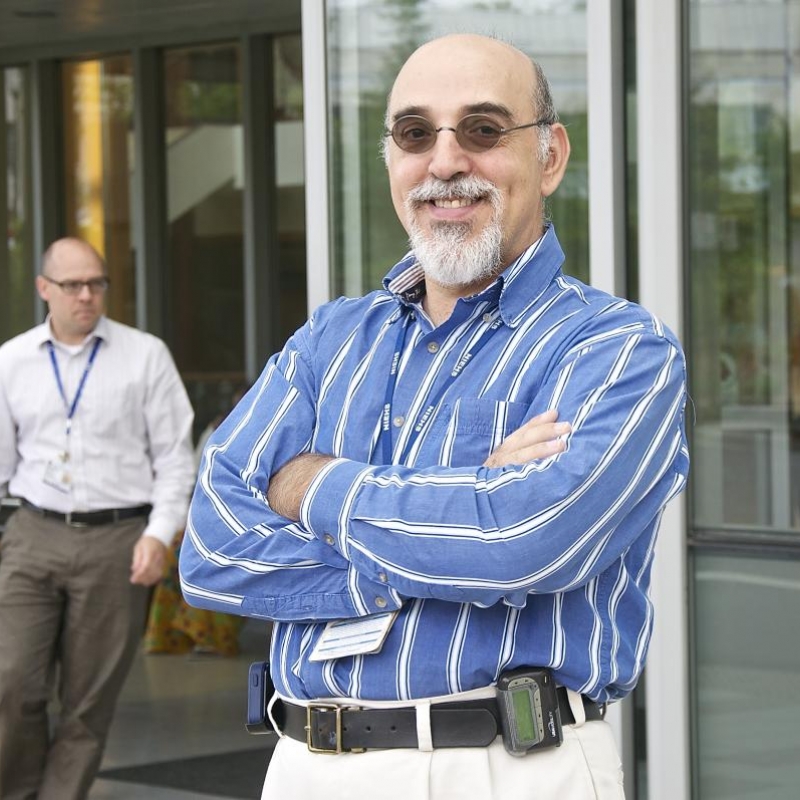 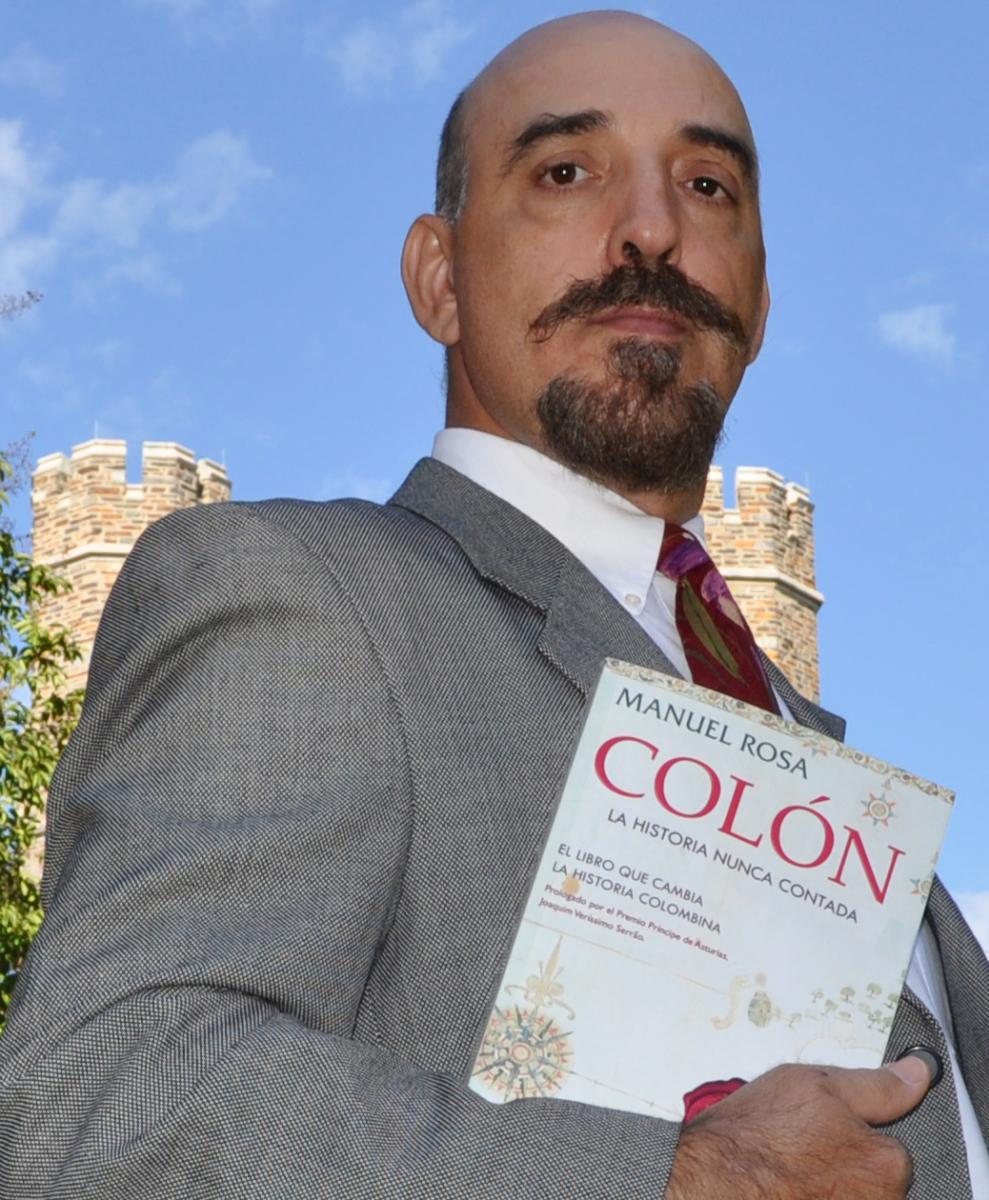 Several years after publishing his first book, Manuel Rosa began a career in IT at Duke.An IT analyst for the Duke Cancer Institute, Manuel Rosa turns sleuth in his free time. A native of the Azores, nine volcanic islands situated in the North Atlantic Ocean, Rosa began his career in the publishing industry. Fluent in several languages, he was asked to translate, from Portuguese to English, a biography on Christopher Columbus. As the project progressed Rosa discovered what he believed to be historical inconsistencies. Fascinated by his initial findings, he concluded there was much more to Columbus’s story than that taught in grammar schools. After two decades of intensive research, Rosa has become, by some accounts, an expert on the man credited with discovering the Americas.

“As I worked on translating the book, I discovered that Columbus’s real name was in fact Cristóbal Colón,” said Rosa, who has become a sought-after speaker and lecturer on the subject. “I also learned, contrary to popular opinion, Columbus was not a peasant as some believed but in actuality a man of nobility. I’ve been able to prove that in 1479 he married Filipa Moniz, a Portuguese noblewoman, the daughter of a distinguished captain serving under King John II. These contradictions of the facts led me to dive deeper. I realized 13 years ago that this was a David and Goliath endeavor; I have never underestimated the challenges associated with de-bunking history.”

Columbus’s marriage to Moniz, an elite member of the Order of Santiago, would require the approval of King John II, of Portugal. Rosa deduced Columbus had to be of aristocratic heritage to have been allowed to marry a woman of such high nobility long before he was famous. He was hooked. Rosa read everything he could find — books, chronicles and documents on Columbus. He studied Portuguese accounts as well as Spanish, French, Catalan, Italian and English accounts. He even traveled to Spain and Portugal, spending hour upon hour poring over massive archives. After 10 years of research he was convinced he had unearthed something others had missed.

“My research has led me to believe that Columbus was a prince born in Madeira, Portugal,” said the Durham resident, who has been featured both on the BBC and on WNPR. “I am also convinced that Columbus, better Colón, intentionally distorted his documents and reports to mislead Spain in favor of Portugal. Quite simply, the man was an undercover agent — a real 007. I believe he was the James Bond of his day. Colón’s voyages were funded by Spain but ultimately, his loyalties belonged to Portugal and King John II.

Over the past 20 years Rosa has either tried to confirm or repudiate the multiple theories surrounding the life and, especially, the mysterious death of Columbus. In his book, “O Mistério Colombo Revelado,” Rosa paints Columbus as being “a sly, cunning, devious and masterful genius,” who not only pulled the wool over the eyes of the Spanish crown but also, the world. 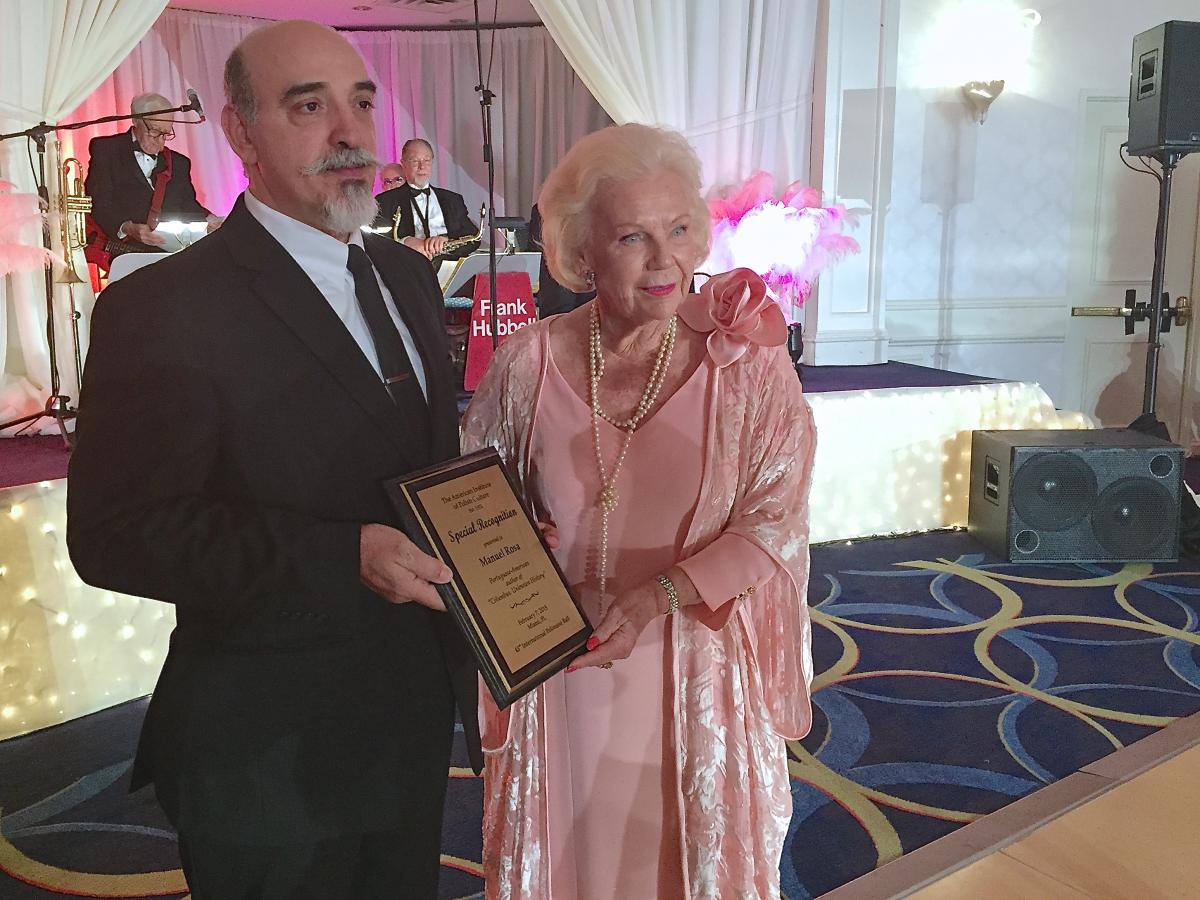 While attending the 2015 American Institute of Polish Culture, Inc., in Miami, Florida, Manuel Rosa is recognized for his work in researching the life of Christopher Columbus. The following day, Feb. 10, Rosa lectured on Columbus at Florida International University. He is pictured here with Lady Blanka Rosenstiel, who organizes the annual International Polonaise Ball.Although his theories are supported by many in academia, including James T. McDonough, Jr., Ph.D., a professor with more than 30 years at St. Joseph’s University, Rosa is not without his detractors. Multiple articles on Rosa have been written and are available online. Some are followed by posted comments either hailing his sleuth work or calling him to task. Regardless, Rosa isn’t dissuaded. He invites his critics to a spirited debate of the facts.

“I realized 13 years ago that this was a David and Goliath endeavor, and I have never underestimated the challenges associated with debunking history,” said Rosa, whose favorite aspect of working for the DCI involves interacting with staff from all over the world. “However, I am no Don Quixote. My arguments are based on documented facts – truths missed by my predecessors. I invite anyone interested to examine and scrutinize my findings.”

Rosa signed on with Duke Cancer Institute in 2008. As a member of the service desk team he provides day-to-day desktop support for DCI faculty and staff. Oftentimes his work calls for both technical expertise, troubleshooting application issues affecting PC and Mac platforms, and the ability to skillfully and tactfully navigate those occasions when harried end users become befuddled, annoyed and frustrated with their systems.

“Manuel’s unique skill set as well as his approachable demeanor are valuable assets to our service oriented group,” said Jeff Allred, manager of Clinical Research Informatics. “A team member with firsthand experience of the rigor of research, albeit in the field of history, is an additional benefit to both our team and our customers.”

Manuel Rosa’s first book, “O Mistério Colombo Revelado,” was published in Portuguese in 2006. Since that time he has had books published in Spanish, Portuguese, Polish and Lithuanian. He is currently searching for a U.S. publisher for an English manuscript, “Columbus: The Untold Story.” For more information or to join the conversation, visit www.1492.us.com.