New Strategies for Cancer Drug Delivery, in Denmark and Duke 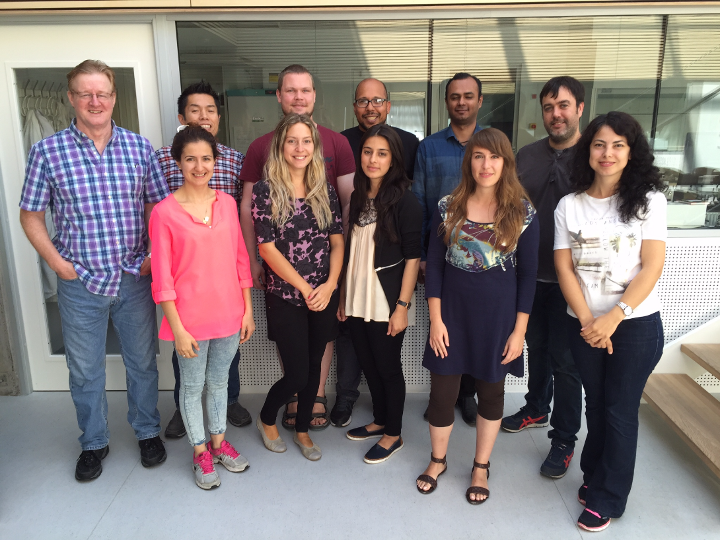 In his role as an internationally prominent Niels Bohr Professor, Duke’s David Needham has established the Center for Single Particle Science and Engineering at Southern Denmark University (SDU) in Odense, Denmark. Four years after its launch, the center is making great progress towards its goal of improving cancer drug delivery—and recently received high praise from an international review panel for its work.

Needham, professor of mechanical engineering and materials science at Duke’s Pratt School of Engineering and member of the Duke Cancer Institute, was one of six international scientists to receive the prestigious award from the Danish National Research Foundation (DNRF) in 2012.

His work in Denmark was supported by $5 million from the foundation, plus $1 million in co-financing from SDU. After his inauguration, the center was created at SDU, featuring six micropipette manipulation stations capable of forming and analyzing microscopic interfaces and microparticles that can be as small as 1/10 of a human hair.

“Basically, they gave me $6 million to do whatever I wanted,” Needham said. “I had to do this.”

The main application of his fundamental studies into the physical chemistry, colloid, and material science of microparticles has been to make and characterize a particular prodrug nanoparticle for anti-cancer diagnostics and therapeutics-- what Needham’s close collaborator, Poul Flemming Høilund-Carlsen, in Odense University Hospital’s Department of Nuclear Medicine, likes to call, “diapeutics.”

“The concept is to figure out what a cancer cells eat, and then put the drug in the cancer’s food,” Needham said.

It turns out that among many things, cancers eat the body’s own, low density lipoprotein (LDL) particles--tiny particles that are made in the liver and circulate around the bloodstream, delivering lipids and cholesterol to the cells of the body.

“They are about 20 nanometers in diameter --that is only 5/1000th the diameter of a human hair,” Needham said. “So this is where our nanoparticle science and engineering comes into play.”

“The prodrug nanoparticles kill all the cancer cells at just 10 micro molar, a concentration of about three grains of sugar in a cup of coffee,” Needham said. “But doctor’s can’t effectively administer Niclosamide to a patient using the existing oral tablets, while the nanoparticles could be injected intravenously”.

An article describing initial feasibility studies was published in the Journal of Drug Targeting.

This summer, the Danish National Research Foundation sponsored a regular review of Needham’s research group by an expert external panel, which gave the team its highest grade, denoting “Excellence from an international perspective”. The panel praised the center for having a well-trained staff of enthusiastic scientists and concluded the center is likely to “catalyze/establish a new approach to the development of diagnostics and therapeutics that will have a major impact”.

The evaluation panel was made up of three world-class scholars, Olaf Sparre Andersen MD, of Cornell University, Ursula Ravens, MD, of Technische Universitaet Dresden in Germany, and Bengt Norden of Chalmers University of Technology, Sweden-- a former chairman of the Nobel Prize selection committee for Chemistry.  The review of the Center took a whole day when the panel saw research presentations and posters, and reviewed a book of abstracts compiled by Needham’s team.

“Our post-docs and students each presented to the distinguished panel, as though it was a mini-symposium session at a scientific meeting,” said Needham, who has focused on training the next generation of researchers as a key part of his role. “They did an excellent job, and showed that they were well on their way to becoming independent scientists in their own right.”

As his term as Niels Bohr Professor draws to a close in 2018, Needham is now bringing his new approach to anti-cancer diapeutics home to the Duke Cancer Institute for testing. He is building new collaborations with Will Eward MD, DVM, in Surgical Oncology and his Comparative Oncology Clinic.

He will also work with professors Greg Palmer, PhD, and Gabi Hanna, MD, and their team in cancer center’s Preclinical Translational Research Unit, who are conducting the first animal studies of the new nanoparticles.

“I’m nearly 64 years old”, said Needham with a smile. “And as I said at my Honorary DSc degree speech at the University of Nottingham last December, its time for me to leave a ‘lineage and a legacy.' And so I am preparing the three institutions - Duke, Nottingham, and SDU - to work as an international consortium of anticancer Diapeutic research, preclinical testing and hopefully implementation into human clinical trials."

This article was originally posted on the Pratt School of Engineering website and is reposted with permission.