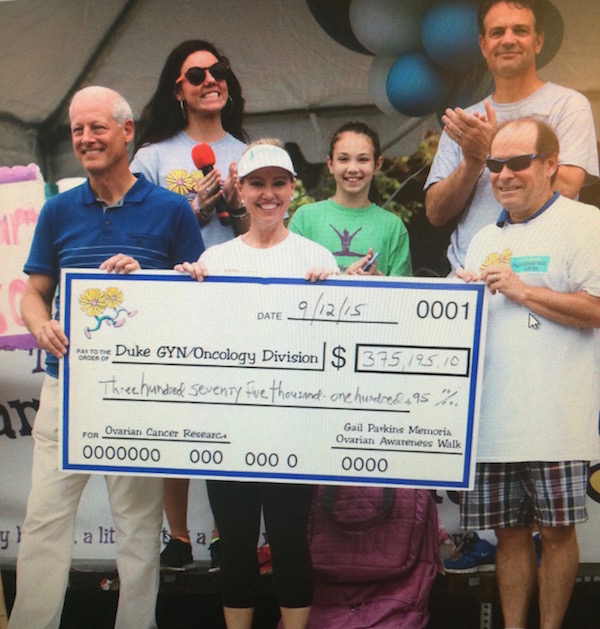 Melanie Bacheler presents a check made out to the Duke GYN/Oncology division to Andrew Berchuck, MD (at left) and Fidel Valea, MD (at right) at last year's Gail Parkins Memorial Ovarian Cancer Walk and 5K Run. Bacheler's husband Tim and her daughters — all active volunteers for the cause, are behind them. This year's event is being held this Saturday, September 17.

It’s been called the silent killer because it spreads fairly quietly, before causing painful symptoms. By the time many women are diagnosed with ovarian cancer, its already advanced through the abdominal cavity.

This is what happened to Gail Parkins, who, at the age of 54, was eventually diagnosed with stage 3 ovarian epithelial cancer.

At that time, her daughter Melanie Bacheler was a new mom of a six-month-old. For two years and two months Bacheler became Parkins’ main care-giver, shuttling back and forth to the hospital and sitting with her during treatments. She quit her job as a pharmaceutical company sales representative and trainer and part-time gymnastics coach, as motherhood and caring for her mother consumed most of her time.

Before diagnosis Parkins had been fatigued and was losing weight everywhere but her middle. One doctor had put her on anti-depressants. She was also treated by a gastroenterologist. As Bacheler explained, it wasn’t until her mother woke up from pain and went to an urgent care doctor who discovered “tumors everywhere” that she was diagnosed with cancer. So she went to Duke to see a specialist and within days was in surgery where doctors found three liters of ascites fluid in her stomach and tumors on every organ in her abdomen.

Parkins lost her battle at 56.

“When she passed away, I was kind of lost,” said Bacheler. “So much of my time had been taken up with all the appointments and things that it was a way for me to channel my grief, to continue to do something. I wanted her back desperately. I missed her. I needed her.”

So in her mother’s honor she organized a benefit walk and 5K in Raleigh. That was 14 years ago, and it’s still going.

“Ovarian cancer survivors feel like the stepchild cancer because breast cancer gets so much attention,” said Bacheler, who can’t stress enough their commitment to the cause. “They are very loyal to this. There are a lot of family reunions at the walk. Even when husbands get remarried, they still participate, and their new wife has to get onboard.”

The first Gail Parkins Memorial Ovarian Cancer Walk and 5K Run attracted 200 participants. The following year more than 500 registered. This year’s walk, to be held on Saturday, Sept. 17, will have more than 3000; drawing people from as far away as New York and Florida. For each of the past five years there have been 100 plus teams participating annually in the event.

The money raised goes to ovarian cancer research at Duke, including to help fund clinical trials that research new treatments, and studies that seek to learn more about the origins of the disease that will enable prevention. The event also helped support hiring a researcher dedicated to ovarian cancer — Susan K Murphy, PhD — an associate professor in the department of obstetrics and gynecology, a position she’s held now for 11 years.

Andrew Berchuck, MD, who directs the Division of Gynecologic Oncology and the Duke Cancer Institute’s Gynecologic Cancer Program, said that having funds available to start new ovarian cancer research projects “makes a big difference” and has helped expand the program.

There are 22,000 new cases of ovarian cancer a year in the U.S., Berchuck said, so it's not as common as breast, colon, lung, or prostate cancer, but it’s not rare by any means.

“Mortality rates haven’t really changed appreciably in the last several decades, with survival overall only about 40 percent,” he explained, which makes raising money for continued research at Duke so important. There are currently promising new therapies in the trial stage that hopefully will improve cure rates in the future.

While doctors don’t recommend screenings for the general population (only for women with the BRCA 1 or 2 mutation or a very strong family history), Berchuck said it’s important for women in their 40s, 50s, and older, to be aware that abdominal pressure, swelling, and bloating can be caused by a lot of different diseases and problems, but ovarian cancer should also be considered as a possibility by patients and physicians.

Berchuck, who’s been involved in the Gail Parkins Memorial Ovarian Cancer Walk and 5K Run since the beginning, says Parkins’ daughter Melanie Bacheler “has extraordinary energy, dedication and interpersonal skills, she’s just a gem.” He added that Bacheler’s husband Tim has also been dedicated to the cause. “I'm just awestruck by the commitment and what they’ve done for our program. They’ve had a huge impact on awareness of ovarian cancer in the Research Triangle area and beyond.”

Andrea Blanford, a reporter with ABC 11, will broadcast from the event and Miss North Carolina USA and Miss NC Teen USA will also be joining in to help raise awareness. Celebrity guests in past events have included ovarian cancer survivor and Olympic Gold medal winning gymnast Shannon Miller, who joined in for the event’s 10th anniversary.

Bacheler said that for ovarian cancer survivors, which she defines on anyone living with ovarian cancer or who’ve had it in the past, the event is a way for them to “get active and feel a little control, because with cancer you have no control.”

“The walk has prolonged some of these women’s lives,” she said. “Their goal has been to make it to the next walk. And they do.”

“It’s a very powerful event emotionally for the teams, for our patients and their families and friends,” said Berchuck. “It really is a spiritual event for the ovarian cancer community.”

One of the highlights is the survivor’s ceremony at the end when women get the microphone and give thanks and talk about their experience.

“It is done at an early time when students haven’t had that much patient exposure and they are actually hearing the human side of cancer and its impact on people, which is very moving,” said Berchuck. “Twenty years from now after the students have long forgotten the regular lectures, I am sure they’ll still remember these sessions with the survivors.”