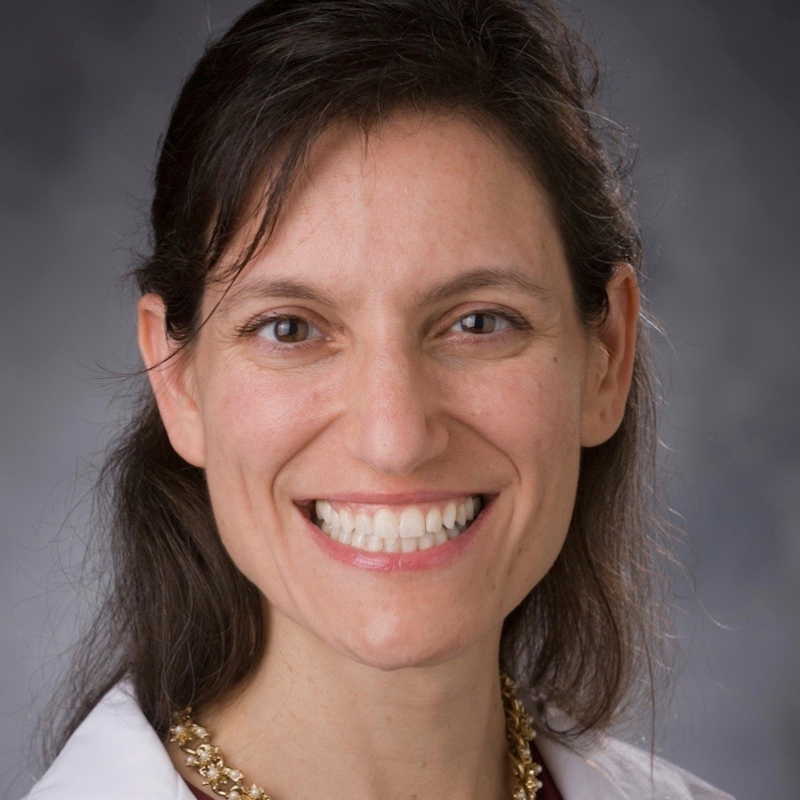 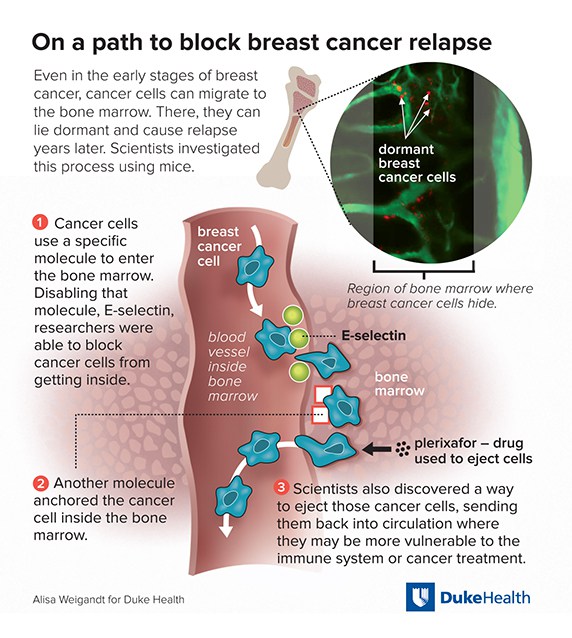 Scientists at the Duke Cancer Institute have identified a molecular key that breast cancer cells use to invade bone marrow in mice, where they may be protected from chemotherapy or hormonal therapies that could otherwise eradicate them.

Through years of experiments in mice, the scientists have found ways to outmaneuver this stealth tactic by not only preventing breast cancer cells from entering the bone marrow, but also by flushing cancer cells out into the blood stream where they could be targeted for destruction.

The findings provide insight into one of the most devastating tendencies of some breast cancers -- the ability to return after seemingly being vanquished. The researchers hope the findings, if replicated in additional animal and human tests, could eventually lead to new therapies for treating breast cancer.

“Clinical studies have found that breast cancer can be caught early and treated, and patients can have no signs of disease,” said Dorothy A. Sipkins, M.D., Ph.D., associate professor in the division of hematological malignancies and cellular therapy at Duke. “And then five, 10 or even 15 years later, a patient can relapse. Most often, the site of the metastasized cancer is in the bone.”

In an article published online May 25 in Science Translational Medicine, the researchers describe how cells from breast cancers that are hormone receptor-positive roam through the blood and tissues of mice. They’re hunting for specific blood vessels in bone marrow that contain the molecule E-selectin. With a key -- molecules on their surface that bind to E-selectin -- the cancer cells enter the spongy tissue inside bones, often lying dormant for years.

Hormone receptor-positive breast cancers are the most common type of breast cancer, according to the American Society of Clinical Oncology, and grow by exploiting the body’s estrogen or progesterone.

In human patients, these dormant cells can resurge later and create metastatic cancer relapse, for which there is no cure, said Sipkins, who is the paper’s senior author. Biopsies of bone marrow in human breast cancer patients have shown that even at very early stages of the cancer, roaming cancer cells, or micrometastases, are making their way out of the breast and into the bone marrow, Sipkins said.

“Now we know how they are getting in,” she said. “We also identified an important mechanism that allows them to remain anchored in the bone marrow. In the mouse, our findings could offer new strategies to intervene at the molecular level before dormant cells can take hold and cause relapse.”

One strategy is finding a way to inhibit E-selectin, which could limit the cancer’s ability to travel into the bone and resurge as metastatic cancer, she said. The scientists used an E-selectin inhibitor called GMI-1271, which is currently in human clinical trials. They found the compound successfully prevented the breast cancer cells from entering the bone marrow in mice.

Because microscopic metastases can spread to the bone marrow before patients are even diagnosed with breast cancer, the researchers also tested a strategy that appears to kick dormant breast cancer cells out of their safe house in the bone marrow and back into circulation. They gave the mice plerixafor, an agent used in human bone marrow donors to push stem cells into the bloodstream for harvesting.

The drug was able to force dormant breast cancer cells out of the bone tissue into the bloodstream. The researchers hypothesize that flushing these dormant cancer cells back into the bloodstream might give the immune system, chemotherapy or hormonal therapy another opportunity at killing them off, Sipkins said. She and colleagues hope to investigate that approach further.

“We are hopeful that by understanding how these breast cancer cells migrate through the body and what their life cycle is, we can discover ways to make them more vulnerable and treatable,” Sipkins said. “Our hope is to move forward with additional studies in mice to better understand our approach before moving on to studies in humans.”

The research was supported by the Young Investigator Award program of the American Society of Clinical Oncology, a Developmental Research Project Award from the University of Chicago Breast Cancer Specialized Program of Research Excellence AQ16, and the Duke Cancer Institute.

The authors cite one disclosure: John Magnani is vice president and chief scientific officer of GlycoMimetics Inc. GlycoMimetics has a patent for GMI-1271, which was used in the study to inhibit E-selectin in breast cancer cells.