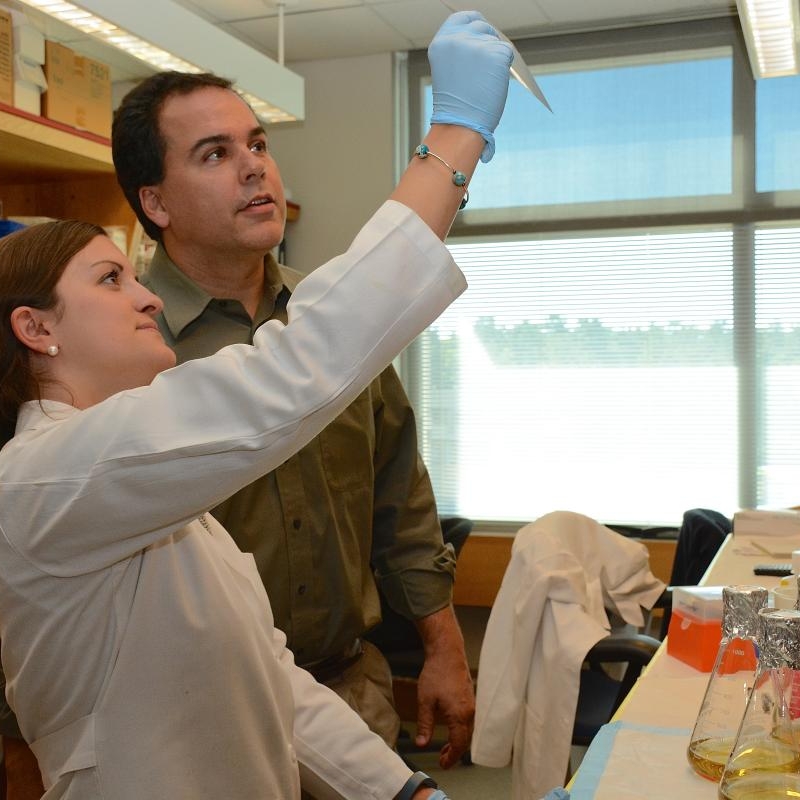 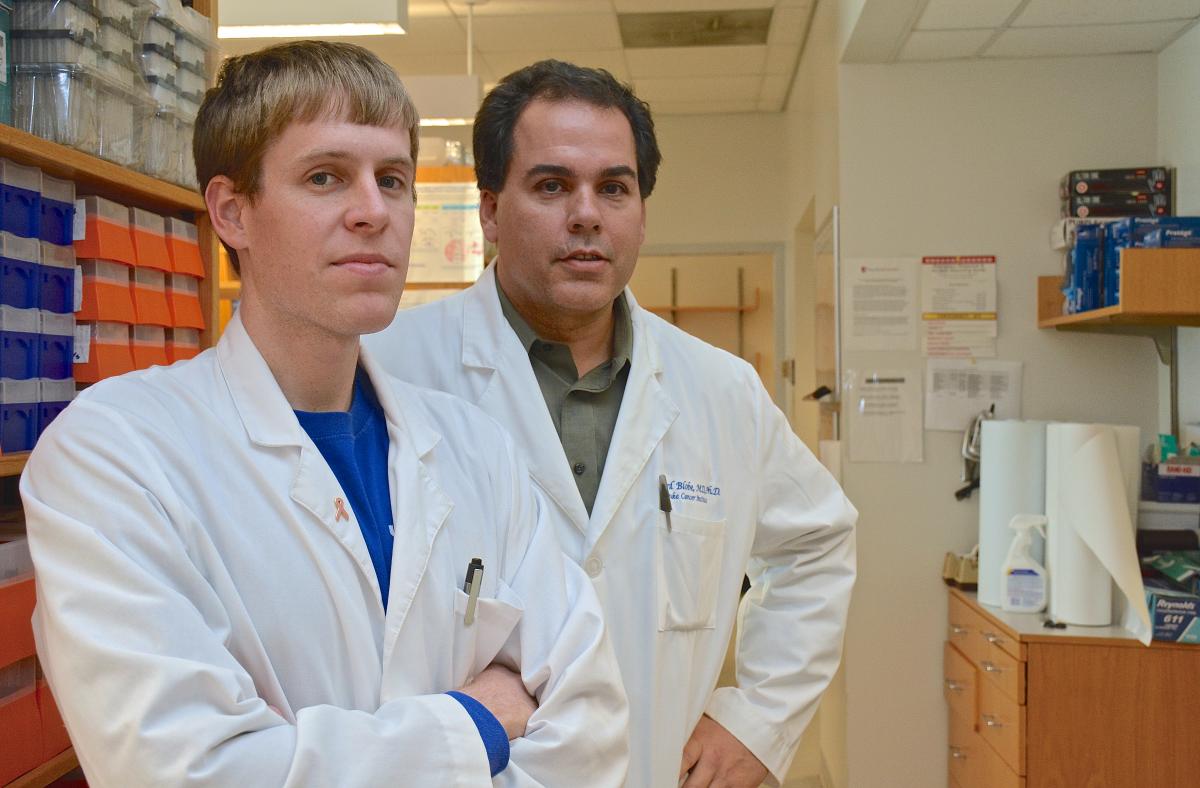 Erik H. Knelson, an MD/PhD candidate at Duke University School of Medicine and the study’s lead author, poses with Gerard Blobe, MD, PhD, professor of medicine, pharmacology and cancer biology at DukeA new strategy for treating neuroblastoma has been identified, with researchers at Duke University Health System identifying a modified version of heparin as the treatment.

The study, conducted in mice and human cells and published June 17 in the Journal of Clinical Investigation, found that when heparin is altered to remove its blood-thinning properties, it can suppress and shrink neuroblastoma tumors without a threat of severe bleeding.

Neuroblastoma is typically seen in infants and children. While neuroblastoma is rare overall – 700 new cases in the United States each year, according to the American Cancer Society – it is the most common cancer in infants.

Despite numerous treatment options for neuroblastoma, survival rates in children with advanced cancer are less than 40 percent because of disease recurrence and the persistence of residual cancerous cells after chemotherapy. However, one difference between neuroblastoma and other solid tumors is the function of the stroma, or connective tissue around the tumor.

“Most of the time we think of stroma in solid tumors as a bad thing that helps cancers become more invasive. In neuroblastoma, it’s the opposite: having a lot of connective tissue around the tumor does something favorable for patients,” Blobe said.Read more

Studying the stroma’s biology, the researchers determined that the connective tissue produces and releases receptors involved in nervous system signaling called heparan sulfate proteoglycans. The heparan sulfate proteoglycans had a differentiating effect on the cancer cells that made immature cancer cells act more like mature neurons and kept them from proliferating.

Heparan sulfate proteoglycans are structurally similar to the anticoagulant heparin, which led the researchers to hypothesize that heparin might recreate the function that naturally occurs in the stroma.

They administered heparin to human neuroblastoma cells in laboratory cultures as well as to mice with neuroblastoma, and found that heparin could differentiate cancer cells and cause tumors to regress in mice. However, the heparin caused severe bleeding. 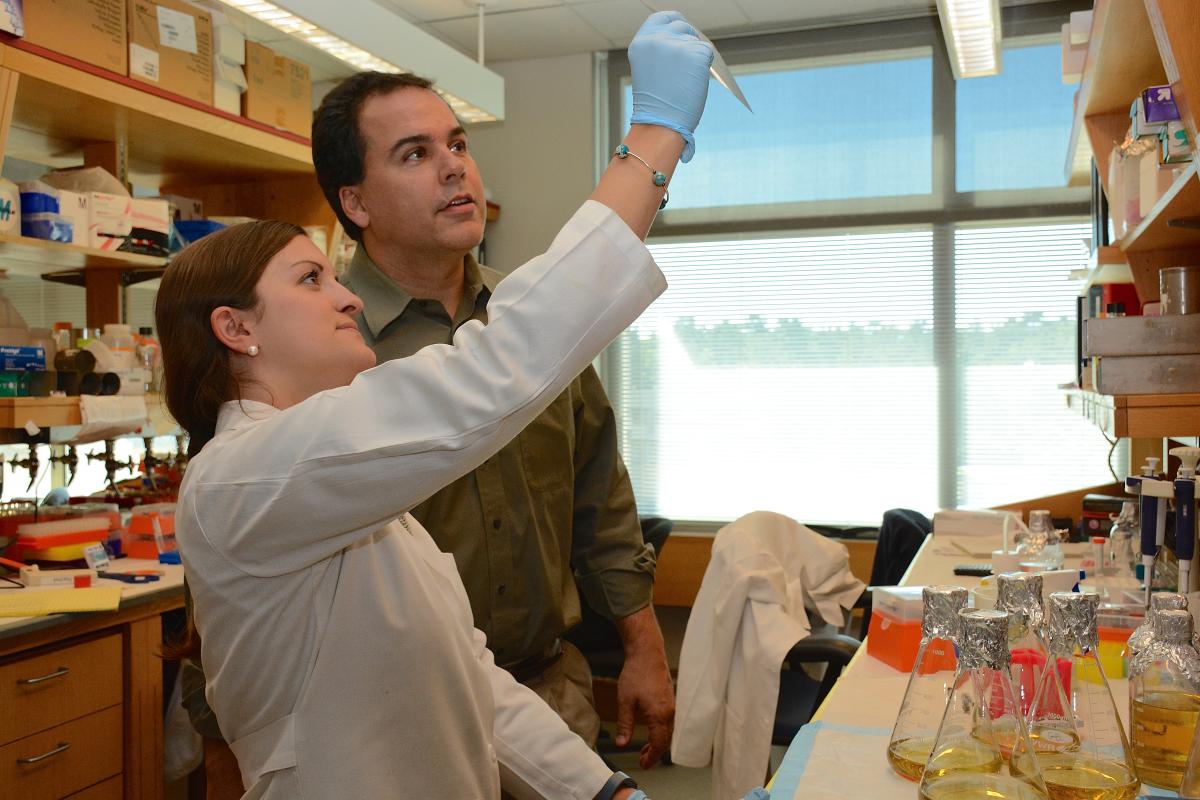 Angie Gaviglio, Ph.D. candidate, Molecular Cancer Biology, consults with Gerard Blobe, M.D., in whose lab she works. Gaviglio is also an author.“Heparin was effective, but caused serious bleeding,” said Erik H. Knelson, an M.D./Ph.D. candidate at Duke University School of Medicine and the study’s lead author. “If we could find a modified heparin that still promoted differentiation but did not cause anticoagulation, we might have a successful treatment.”

When tested in lab cultures, the heparin derivative suppressed neuroblastoma growth. In mice, it slowed the cancer’s progression, shrunk the tumors and extended the animals’ lives.

“We want to repurpose a drug that’s already out there for the benefit of patients,” Blobe said. “What’s exciting about that is there are other tumors in which differentiation is useful, so there’s the potential to apply these insights to other cancers.”

The team is now working to move the research into clinical trials in humans to determine whether the heparin derivative offers the same benefit in humans as it did in mice. Additional funding is needed in advance of further trials; Alex’s Lemonade Stand already is helping to translate this into the clinic.