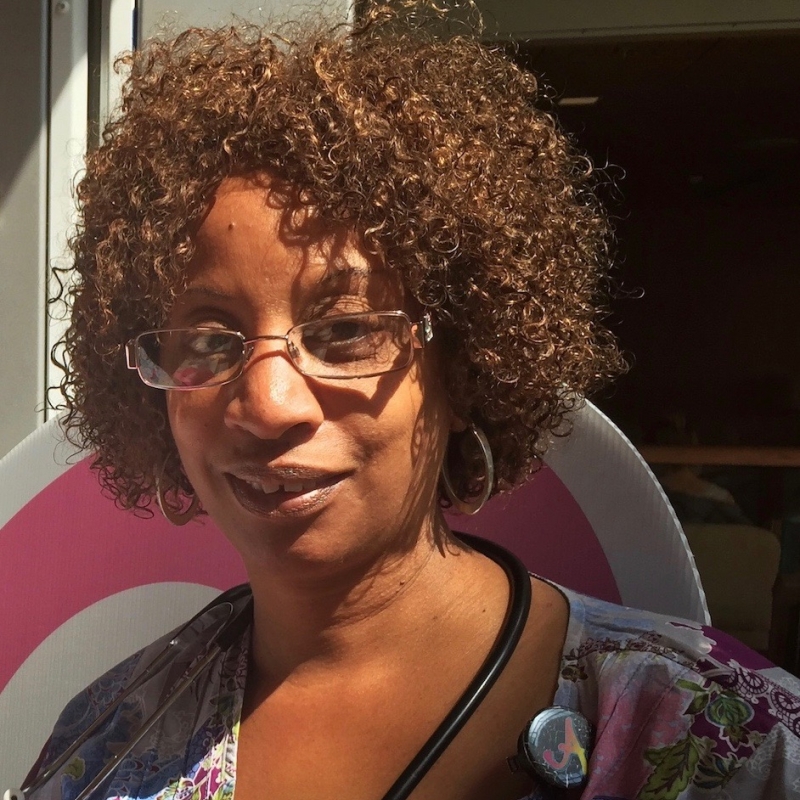 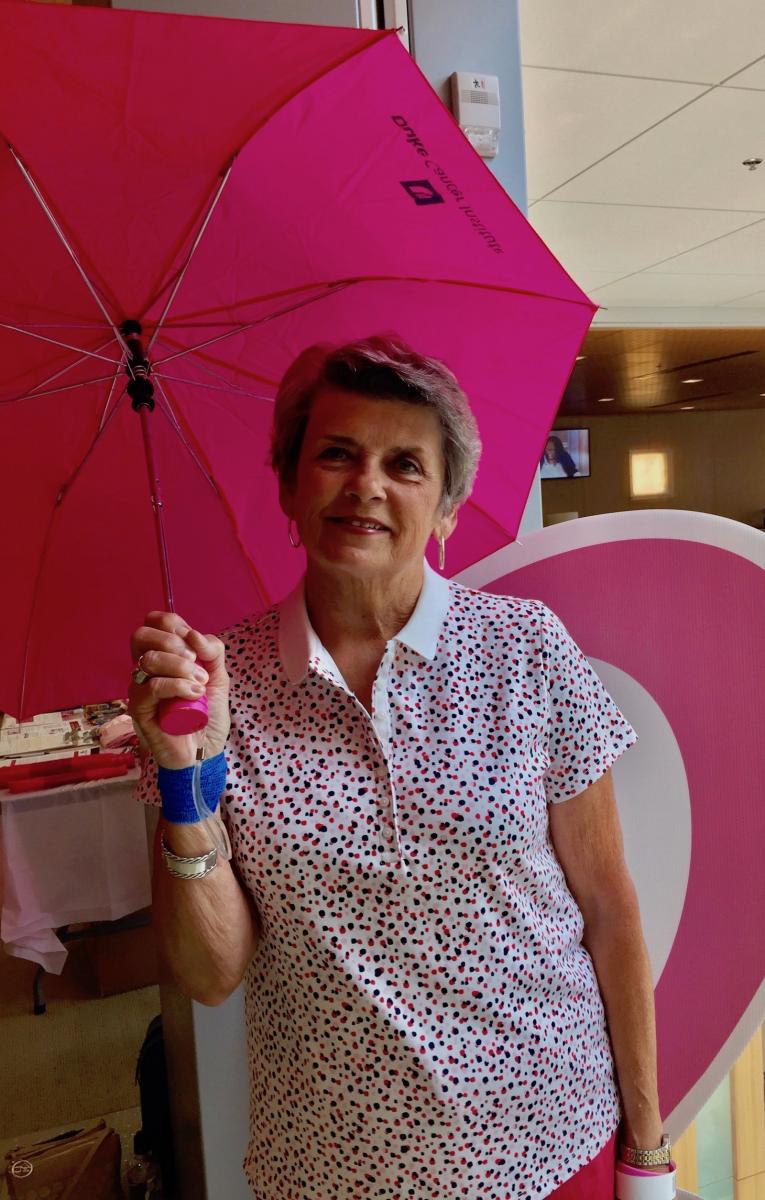 Those who signed up in person today received DCI and ACS-branded bracelets, sunglasses, bandanas, pins, walk t-shirts, and even pretty-in-pink umbrellas to stay cool. Duke Cancer Institute, for the third year, is the local presenting sponsor of the American Cancer Society’s Making Strides of Raleigh walk.

Carolyn Watson, known as “Lolly” to her three grandsons, was diagnosed with stage two breast cancer in January, underwent surgery in February and was declared cancer free. She followed up with radiation this Spring and is now on a regimen of oral chemotherapy that she said she’ll take for the next five to ten years. Beaming and twirling a Duke Cancer Institute umbrella, she posed for DCI Facebook photos by the sign-up table then invited her husband to take a few more cheery snaps. 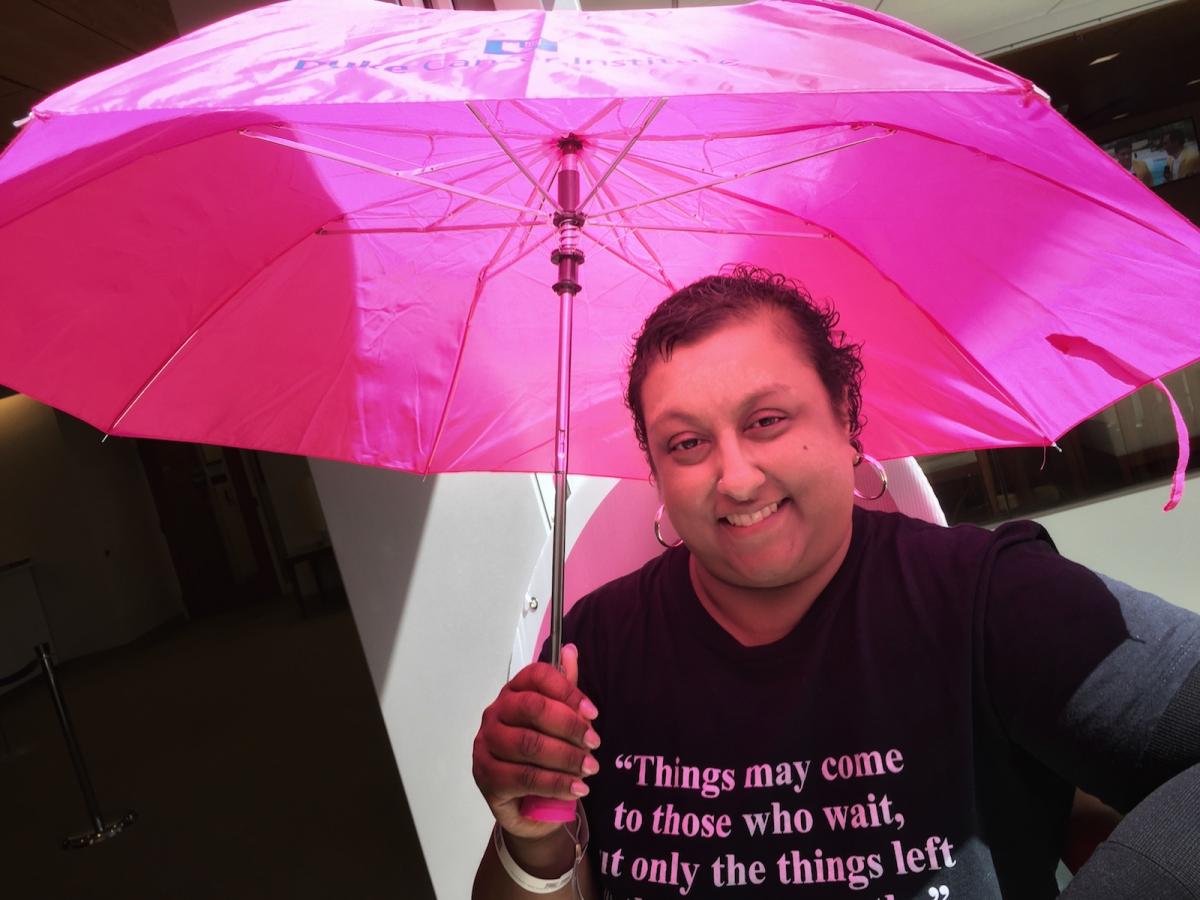 Shirley Pal, breast cancer survivor. Her t-shirt reads: "Things may come to those who wait, but only the things left by those who hustle."Shirley Pal, a two-month survivor, was looking forward to her first Making Strides walk. The first person to have cancer in her family, she was stunned at the age of 42 by a diagnosis of stage three breast cancer.

After feeling a lump in May last year, she went for her first-ever mammogram to have it checked out. Treatment included a mastectomy, the removal of several lymph nodes, and courses of chemotherapy and radiation. On May 15 of this year she was declared in remission.

“I love this hospital,” said Pal, grateful for her treatment by breast oncologist Kimberly Blackwell, MD. “Everyone is so caring."

Kirsten Schiavone, a former mammogram tech from Long Island, New York, moved to the area six years ago to be closer to her daughter and help take care of her grandbaby. She said that once she caught sight of the scan at her annual mammogram this past February, she knew she’d be back for more testing. Her diagnosis of stage three invasive ductal carcinoma by her oncologist P. Kelly Marcom, MD, was nevertheless a blow. Schiavone, 72-years-old, had lost her husband to cancer not long before. She planned to invite her daughter and grand-daughter to Making Strides. 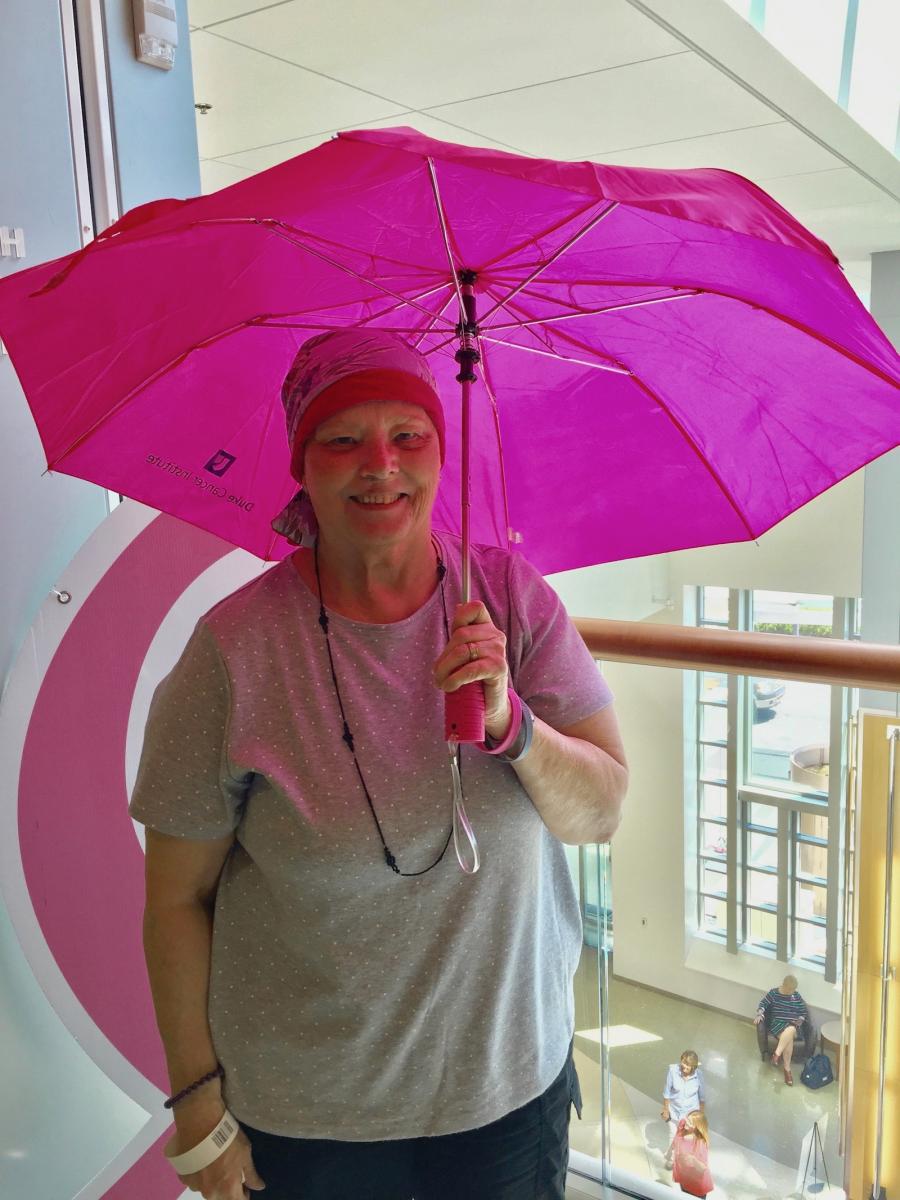 Brenda Bigelow and Adrienne Diggins, both of whom work in Clinic 2-2 of Duke Cancer Center, also pledged their support for Team Duke Cancer Institute and joined the team.

Making Strides of Raleigh teams have already raised more than $15,000 toward the American Cancer Society’s goal of $350,000.

If you missed today’s in-person registration party, you can catch upcoming similar registration parties at Duke Cancer Center Clinic 2-2, from 10 a.m. to 1 p.m. on Wednesday, Aug. 23, and Wednesday, September 20 and at Duke Women’s Cancer Care Raleigh from 9 a.m. to 11:30 a.m. on Wednesday, Aug. 16. Making Strides organizers will host a kick-off soiree for walk participants, breast cancer survivors and sponsors on Thursday, Aug. 17, at 6 p.m. at the Renaissance Hotel at North Hills in Raleigh.

The Making Strides of Raleigh walk will be held on Saturday, October 14, at Midtown Park at North Hills Mall in Raleigh. Team Duke Cancer Institute will be led by oncology breast surgeon and honorary team captain E. Shelley Hwang, MD. Breast surgeon Jennifer Plichta, MD, director of the Breast Risk Assessment Clinic at Duke, will be co-captain. Participants are encouraged to join Team Duke Cancer Institute or form their own teams and raise funds. Registration is free. For more information, visit Making Strides of Raleigh.