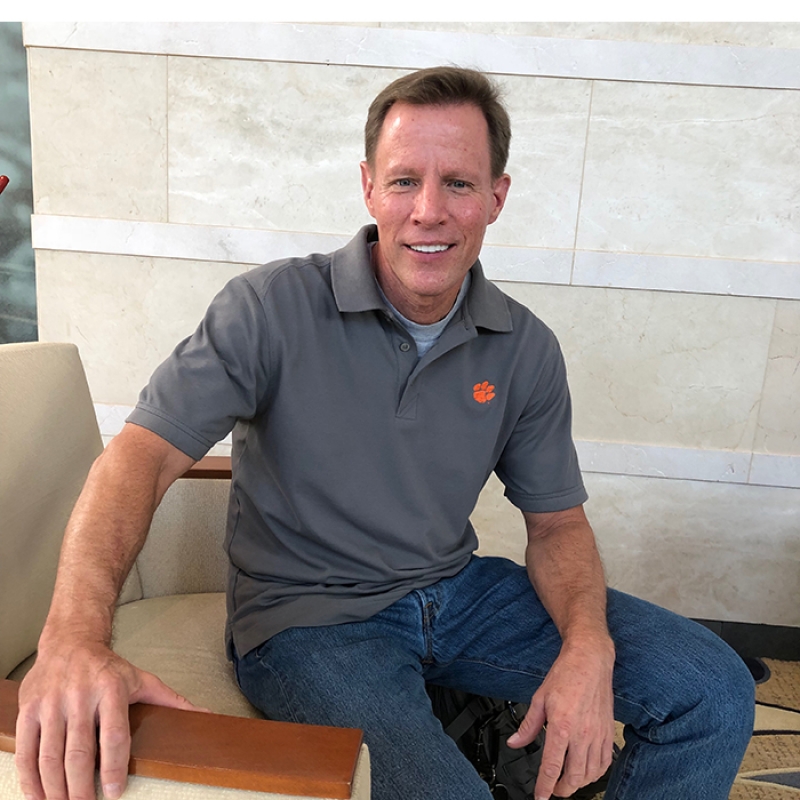 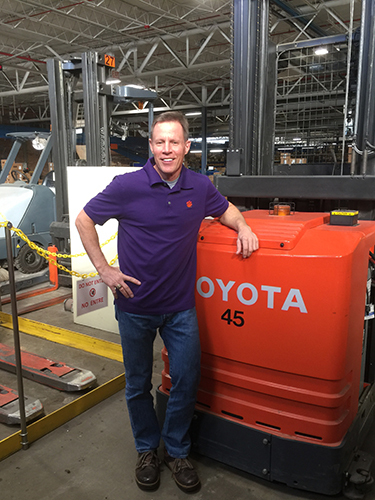 Colorectal cancer survivor Tom Vibert is an industrial engineer with Kayser-Roth, one of the largest legwear companies in the U.S. In his fight against cancer, he employed some of the same successful strategies he uses on the job.Join us at facebook.com/dukecancerinstitute on Wednesday, May 1, at noon for a live panel discussion featuring cancer survivor and cycling enthusiast Tom Vibert, his oncologist John Strickler and Katie Sweet, senior manager of communications with The V Foundation for Cancer Research. Our own Michael B. Kastan, MD, PhD, executive director of DCI, will moderate a discussion centered on Tom and the upcoming Victory Ride.

As an industrial engineer, Tom Vibert, 56, has excelled in his career by identifying waste and streamlining production processes; all the while, without jeopardizing quality. It’s no surprise then that when diagnosed with stage 4 metastatic colon cancer, Vibert dismissed the emotions that didn't serve him well, choosing instead to embrace an attitude that could propel him to a seemingly insurmountable goal—a second chance at a life free of cancer.

“From the outset, I aimed to be the best patient I could be,” said the Clemson University alumnus. “I was driven to see my cancer eliminated.”

During a routine physical exam in 2012, Vibert told his primary care physician that he’d been experiencing some abdominal pain. His doctor ordered a CT scan.

“The next day I was face-to-face with a surgeon,” shared Vibert, who lives in Greensboro, North Carolina. “Initially I thought surgery, and I’m all done. But when my surgeon told me that I was going to need chemotherapy, I realized my situation was quite serious.”

After undergoing a partial colectomy, Vibert began chemotherapy. Because of a family history of cancer, Vibert’s oncologist asked him to get genetic testing, which can sometimes show predictive biomarkers that help oncologists find better treatments for their patients.

While Vibert waited on the results of his testing, he underwent a PET scan. The PET scan showed Vibert’s cancer had spread from his colon to his celiac plexus, a complex network of nerves located in the abdomen. The tumor was inoperable. Vibert knew he was in a fight for his life.

According to the American Cancer Society (ACS), colorectal cancer is the third leading cause of cancer-related deaths in men and women in the U.S. One in 22 men will be diagnosed with colorectal cancer in his lifetime. Approximately one in 24 women will face a diagnosis of colorectal cancer. Colon cancers that metastasize, or spread, are much more difficult to treat.

The results of Viberts genetic biomarkers revealed he had inherited a condition, Lynch syndrome, that actually caused his cancer. However, this same condition also meant his tumor might be exceptionally responsive to certain immune therapies. Lynch syndrome is also known as hereditary non-polyposis colorectal cancer (HNPCC). People with HNPCC have an impaired ability to fix DNA mutations. Over time, these mutations build up in cells, which leads to the early onset of certain types of cancer.

These tumors with deficient mismatch repair (MMR), otherwise known as MSI-High (microsatellite instability-high), carry far more mutations than the more common microsatellite stable (MSS) tumors. Some mutations produce proteins that appear foreign to the immune system. These mutated proteins attract immune cells to the tumor, forcing the tumors to defend themselves from immune attack. Immune therapies break down a tumor’s defenses against immune attack, and stimulate the surrounding immune cells to kill the tumor.

Vibert, an avid cyclist, runner and “gym rat,” refused to give in. Even when he was ravaged with excruciating pain in his abdomen, he continued to report daily to Kayser-Roth, only missing work for treatments and medical appointments. He also continued to work out and cycle, clocking in as many miles as his body would allow.

“I always handle things better when I’m in shape,” Vibert said, “so I was always trying to stay there or get back there. Whenever I had to give ground to cancer, I would work to take it back.”

While the inoperable tumor in his celiac plexus began to shrink, it wasn’t long before it began increasing in size again. Sixteen sessions of radiation followed by another 10 weeks of chemotherapy could not stop the progression. Based on the results of his genetic testing, Vibert was referred to John Strickler, MD, a gastrointestinal oncologist at Duke who was overseeing a clinical trial focused on treating people with MSI-High metastatic colorectal cancer. 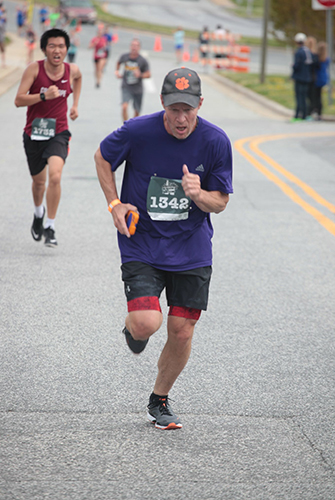 "There's no time to sit back and think about stuff. You need a plan to get rid of the cancer . . . Then it's full speed ahead to be the best patient you can be."

“The day I met Tom he was a different guy from the one you see today,” said Strickler. “Despite having been treated for two years with conventional chemotherapy, Tom had experienced disease progression; his options were limited. And if that wasn’t enough, he was experiencing severe pain even though he was on very high doses of narcotics.”

Vibert’s pain prevented him from sleeping well and eating well. He was losing weight. Strickler remembers Vibert barely able to sit up in a chair at that first visit.

“Those I work with have seen me in good times and bad,” Vibert said. “When I was going through treatment they didn’t want to share with me how bad I looked, but now they tell me that back then they didn't think I was going to make it.”

Strickler enrolled Vibert in a clinical trial, Checkmate-142, employing Nivolumab, a targeted treatment for inoperable or specific metastatic cancers, including MSI-H colorectal cancer, melanoma and lung cancers. Researchers wanted to confirm that Nivolumab could be effective for patients who had MSI-H tumors. Vibert underwent infusions every two weeks. He found that the treatments had far fewer side effects than chemotherapy, and Vibert was able to remain on the regimen for more than two years.

“As hoped, the immunotherapy unleashed Tom’s own immune system to attack the tumor,” Strickler shared. “After just one treatment, Tom was already asking to stop his pain medications.”

To everyone’s amazement, Vibert tapered off the medications over a period of just a couple of weeks. And he was back to cycling.

“In the old days of cancer treatment, it was one size fits all,” said Strickler. “A patient diagnosed with an advanced cancer would receive the same chemotherapy regardless of what was drivin 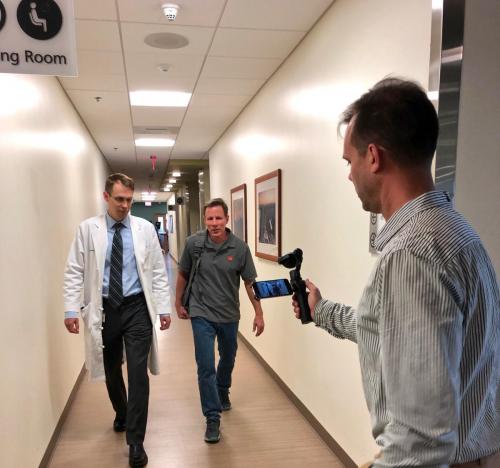 While being filmed, Tom Vibert walks the halls of Duke Cancer Center with his oncologist John Strickler, MD. The pair is to be featured in an educational video produced by the Global Colon Cancer Association. The video is expected to launch in March and will be available for viewing at globalcca.org.g the tumor. In the era of personalized medicine, we've learned how to provide treatment that attacks the tumor’s biological weaknesses. These vulnerabilities may be different from one patient to another, but we have made major strides in how we use biomarkers to identify these vulnerabilities.”

According to scans, Vibert is now cancer free. When he finished the trial in 2017 Vibert, ever grateful for a second chance, began pursuing his dreams, including a dream to bike 100 miles. Suffice to say, he has reached his 100-mile quest, and then some.

“From the very start, I looked at cancer as an opponent that must be defeated,” said Vibert, a broad smile crossing his face. “There’s no time to sit back and think about stuff. You need a plan to get rid of the cancer, and that’s the plan you’re on. Then, it’s full speed ahead to be the best patient you can be.”

Because he has Lynch syndrome, Vibert will always be susceptible to a cancer recurrence. Continuous monitoring will forever be a part of his life. If cancer returns, he says, “There's no doubt—I’m going to be ready to fight it again.”