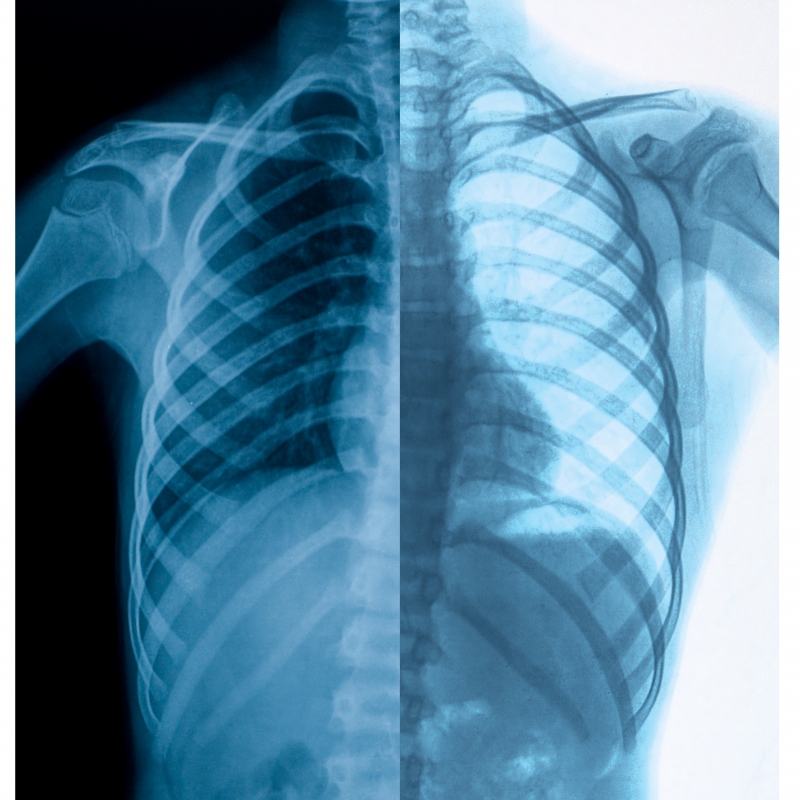 As the COVID-19 pandemic shines a light on health disparities, efforts to find new ways to reduce them get a boost.

A group of researchers at the Duke Cancer Institute (DCI) is working to change those statistics, and a new federal grant is giving them a big boost.

Patierno is principal investigator of the grant, which supports two projects—one relating to lung cancer, and the other to stomach cancer. “Both projects will produce information that can influence and change clinical paradigms,” Patierno says.

The grant, an Exploratory Grant (P20) from the National Cancer Institute to develop a Specialized Program of Research Excellence (SPORE) (see SPORE box, below), is intended to help establish the necessary foundation to grow a program capable of winning a larger Specialized Center (P50) SPORE grant. At that point, the program would be expanded to address disparities in other types of cancers.

Health disparities related to cancer are caused by a multitude of factors that create worse outcomes for people of color, including limited access to health care and screening, environmental and lifestyle factors, institutional racism, implicit bias, fear and mistrust, language barriers, lack of transportation, and more.

One of the many factors influencing cancer disparities is biology. “At the biological level, it can go in either direction,” Patierno says. For example, White people are more likely than African Americans to be diagnosed with bladder cancer, while the reverse is true for kidney cancer.

“If we can identify risk factors that might be associ­ated with where and in which direction a particular patient’s ancestors left Africa—and we’re all out of Africa—that ancestral lineage might help us identify people who may be at higher risk for specific cancers, aid in prevention and early detection efforts, and help us identify novel targets for drugs,” Patierno says.

Jennifer Freedman, PhD, and Jeffrey Clarke, MD, both assistant professors of medicine (medical oncology) are coleading the lung cancer project. In a previous project, they identified biological differences among lung cancer tumors from White and African American patients. This work, which was funded by the V Foundation for Cancer Research, the Lung Cancer Initiative of North Carolina, and a Duke Cancer Institute Pilot Research Award, set the stage for the P20 SPORE funding.

The differences they found are related to how genes express themselves through RNA splicing, which is the process that allows a limited number of genes to create an enormous number of proteins. Freedman explains, “If RNA splicing breaks down or is dysregulated, it can cause cells to make proteins they don’t normally make, and that can lead to many different diseases, including cancer.”

They also found that some of those splicing differences are associated with shorter survival rates.

The new federal funding will allow the researchers to take the next steps. “Moving forward,” Clarke says, “the goal is to confirm this finding in a larger number of lung cancer samples and ultimately understand the biology so that we can develop new treatments and help mitigate disparities in lung cancer.” Freedman and Clarke will manipulate cells in the lab so they express either the RNA splicing variants seen in people of West African ancestry or the variants seen in those of European ancestry. “Then we’ll see how these cancer cells differ,” Freedman says. “Does one grow faster than the other? Does one spread faster than the other?” Once the researchers understand the mechanisms of the splicing variants, they’ll be able to identify targets for drugs that could keep the harmful splicing events from happening.

Patierno says RNA splicing differences offer a potentially rich opportunity for reducing disparities not only in lung cancer, but in many other cancers as well. He and Freedman previously discovered RNA splicing differences in prostate cancer between African American men and White men. In fact, Patierno says, there are ancestry-related RNA splicing alterations in at least 18 genes whose function is implicated in five different kinds of cancer—prostate, breast, colon, and two kinds of lung cancer. Seven of those genes are also involved in four other types of cancer—cervical, liver, pancreatic, and uterine cancer.

Stomach Cancer: A bacterium is only part of the story

The vast majority of cases of stomach cancer in the United States are caused by infection with Helicobacter pylori. In some people, the bacterium causes no symptoms, but in other people it causes ulcers, inflammation, and other kinds of damage that can eventually lead to cancer.

About 3 percent of people with H. pylori will develop stomach cancer; clearing up the infection with antibiotics cuts that risk in half.

The incidence of ulcers and stomach cancer has declined over the past century as improved hygiene and the use of antibiotics have cut down on the prevalence of H. pylori. But neither H. pylori nor stomach cancer have been eliminated, and both the bug and the disease are more common among African Americans than Whites.

That really bothers Meira Epplein, PhD, an associate professor in population health sciences and medicine (medical oncology) whom Patierno describes as “one of the leading experts on H. pylori in the world.” She calls stomach cancer “highly preventable.”

However, H. pylori is only part of the story, because African Americans with the infection are more likely to develop stomach cancer than Whites with the infection. Other risk factors for stomach cancer include smoking, a high-salt diet, and family history. Researchers suspect that the biology plays a role as well: It may be that certain strains of V Cc are more carcinogenic than others or that certain aspects of a person’s immune response create conditions that encourage cancer.

“We’re trying to figure out the biology behind what’s happening,” says Epplein, who is coleading the stomach cancer project with Katherine Garman, MD, associate professor of medicine (gastroenterology).

The researchers will analyze a large number of previously banked tissue specimens from people who had H. pylori along with information about their disease and lifestyle factors such as smoking. They will also invite patients who are scheduled for upper endoscopies (in which a physician examines the lining of a patient’s esophagus and stomach with a flexible tube and camera) to fill out a detailed questionnaire, donate tiny tissue samples, and agree to let the researchers keep track of the progression of their disease.

In both of these studies, researchers will look for clues in the strain of bacteria, the patient’s immune response, and lifestyle factors to see if they can find patterns that help account for the worse outcomes for African Americans. If certain strains or immune responses are more likely to lead to stomach cancer, that information could be used to identify patients who need H. pylori screening and treatment.

“For a rare cancer like stomach cancer, it’s better to identify which patients are at highest risk and then focus our preventive efforts on those patients,” Garman says. “It doesn’t make sense to apply screening to a large population for a cancer that’s rare.”

As a clinician, Garman is also excited to generate data that will inform guidelines to help her and her colleagues manage patients who have certain types of tissue damage that sometimes, but not always, lead to stomach cancer. Right now, there’s no way to know which of these people need more aggressive treatment and which simply need to be monitored.

Patierno, who has worked in cancer disparities for decades, says that the COVID-19 pandemic is shining a spotlight on health disparities in a way that adds new urgency to all of this work. “We’re right at the apex of changing the world right now,” he says, “mitigating cancer disparities with the goal of achieving health equity.” 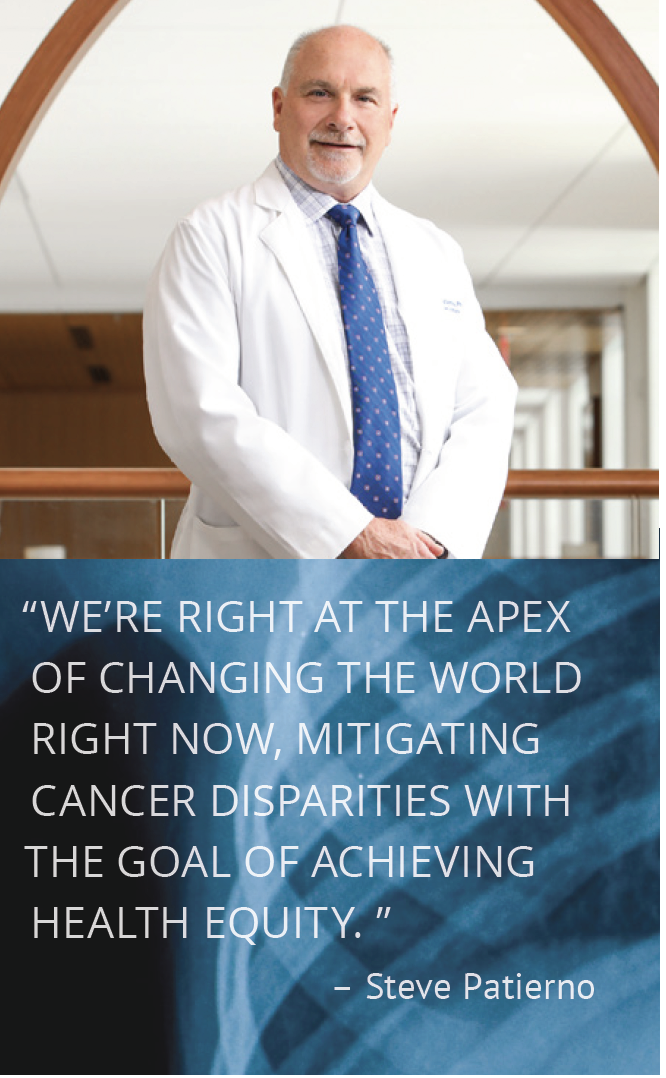 You can help accelerate research like this. To make a gift, please visit bit.ly/dciwinter2021.