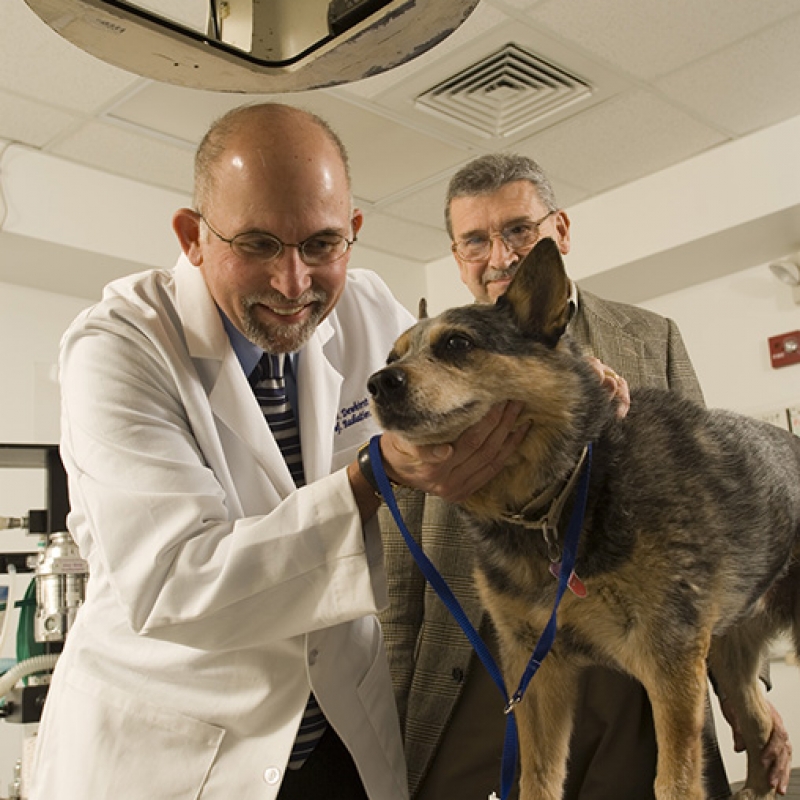 Will Edward, DVM, MD, works to find better treatments for a cancer called sarcoma. It makes no difference to him that half of his patients walk on four legs and bark at the doorbell.

Eward, an assistant professor of orthopaedics, treats dogs at Triangle Veterinary Referral Hospital, as well as people at Duke Cancer Center. “When it comes to cancer, it really doesn’t matter if you have fur or skin or feathers,” he says. “It’s the same disease.”

Sarcoma is rare in humans, but often lethal. It’s much more common in dogs. In his days as a full-time veterinarian, Eward became frustrated with the lack of good treatments. So he went to medical school to launch a full-scale fight against the disease in both species.

A few other cancer specialists, including Duke’s Mark Dewhirst, DVM, PhD, Gustavo S. Montana Professor of Radiation Oncology, have believed in this idea, called “Comparative Oncology” or “One Medicine,” for more than 40 years.

The approach is behind a formal partnership launched in 2015 between Duke Cancer Institute and the College of Veterinary Medicine at North Carolina State University. The Consortium for Comparative Canine Oncology (C3O) will bring together cancer doctors and researchers at the two institutions and will fund research projects that include both.

New treatments typically are tested in research animals, such as mice that are bred to get cancer. But studying that same drug in a pet dog who developed cancer naturally is much closer to studying it in a human. “Because of a dog’s size, you can do dosing that’s more like dosing in a human,” Dewhirst says. And, dogs get cancer as they age just like we do, so pets in clinical trials may have other illnesses, making the results more realistic.

Comparative oncology will help dogs too. “Trials in humans and in dogs should inform each other,” says Michael Kastan, MD, PhD, executive director of Duke Cancer Institute and William W. Shingleton, MD, Professor of Pharmacology and Cancer Biology.  Pet owners are likely to be especially interested in newer targeted therapies, which are less toxic than traditional treatments, says Kastan.

In addition, pet dogs may help reveal previously unknown cancer-causing genes. “If you look at a sarcoma, you will have thousands of mutations,” Eward says. “But if we find that a certain type of sarcoma in a dog and the same type of sarcoma in a human have only four mutations that are common between them, those are probably the driver mutations.”

Kastan agrees. “Many of the genes that we know about that cause cancer in humans, like the BRCA genes in breast cancer, were discovered by studying families that have a high predisposition to cancer," he says. "When a particular dog breed gets a high rate of a particular cancer, it means there’s something about their genetic makeup that’s predisposing them. So studying them is like studying a family.”