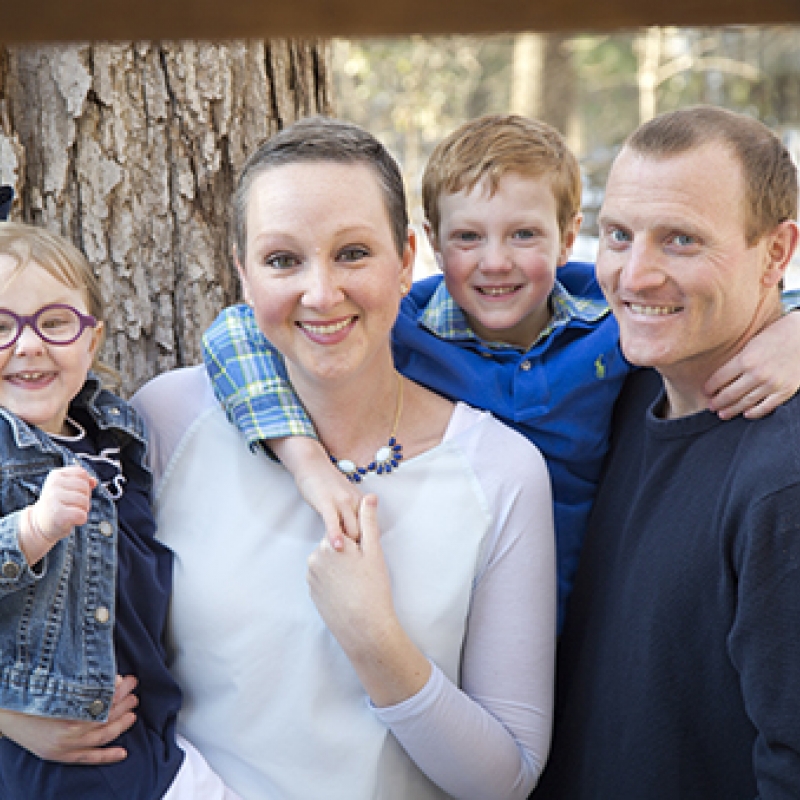 On a February Monday night, Lori Elliott, her husband Daniel, and their two children celebrated the end of her active treatment for breast cancer. "We had a birthday cake, and my daughter kept singing happy birthday," Elliott says. "I tried to explain to her that it's not my birthday, but then I thought, you know, it is, sort of, so we'll just sing it."

"It has been hard. But I'm thankful to have my kids because they keep me going," Elliott says. Her daughter Grace is 3, and her son James is 6.

Elliott's diagnosis began with a lump. Her doctor sent her to Duke Cancer Institute for a mammogram and ultrasound. Within 24 hours she had biopsy results.

"The whole time I was at Duke I felt that my doctors were on top of things," Elliott says. Her team included Gregory Georgiade, MD, Rachel Blitzbau, MD, and Kimberly Blackwell, MD.

"I know without a doubt that Dr. Blackwell saved my life," Elliott says. "I had no physical sign of cancer in my lymph nodes, but Dr. Blackwell ordered a PET Scan anyway, though other doctors may not have." The PET scan showed that the cancer had skipped the lymph nodes in the armpit and had spread to one in her chest.

When Elliott was first diagnosed, she had long hair that hung below her shoulders. "When Dr. Blackwell told me I would have chemo, I started crying because I knew I would lose my hair. And, I knew my kids were going to be scared by that. I talked with Dr. Blackwell about that. She talked about her own kids, and she cried along with me. Here was this world-renowned oncologist, crying with me about my hair. No topic was too trivial for her."

Elliott says she felt that same level of personal concern from everyone she met at Duke, even the people at the information desk and the valet workers who parked her car. "The valet guys learned my name. They helped get me through the six weeks of radiation, when I was at Duke every single day."

"After radiation, Dr. Blitzbau told me to be sure to allow myself time to heal, and to make sure to go home and thank my family for going through this with me," Elliott says. "I thought that was great. That's why we had the cake."

Elliott wants to do something to express her newfound gratitude for life.

"I feel like I have my life back, but I don't know what to do with it," she says. "I'm thankful to be able to sit here and drink a glass of water. When I was in chemotherapy, water tasted like poison to me. Water is such a gift, and we take it for granted. Someday I want to go to Africa and help build a well. I can't go back to my normal life. I have to do something to give back."