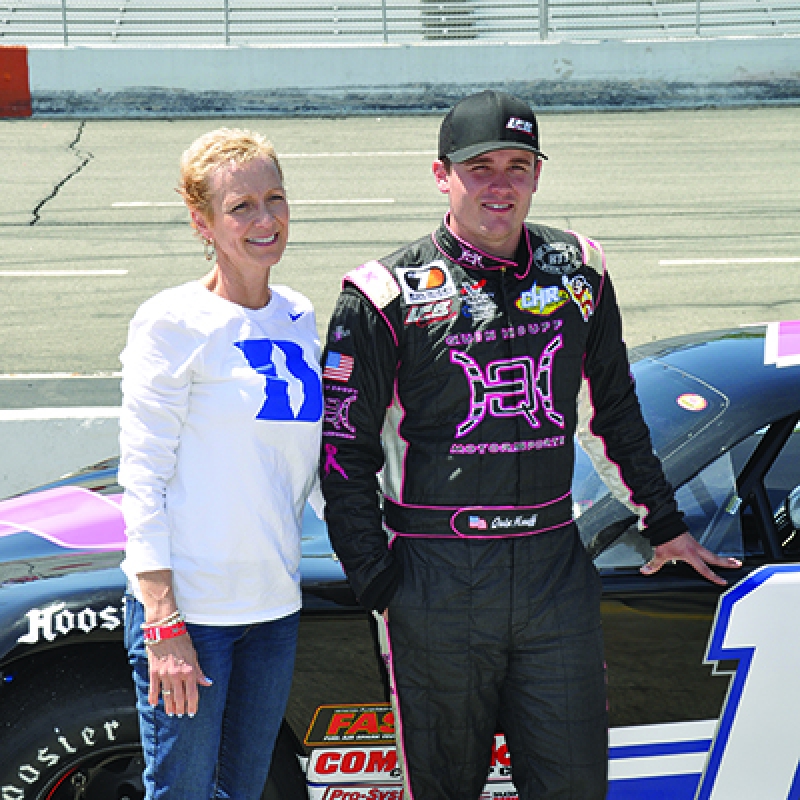 Quin Houff (pronounced “howf”) of Weyers Cave, Virginia, fell in love with racing at age eight, driving go-karts with his dad, Zane. “Our family has a trucking business, and they say driving is in our blood,” Quin says. By age nine, Quin was racing mini-cup cars (half-size stock cars). “I’m just very competitive. For some reason I have a need for speed,” he says.

Now, at age 18, Quin drives faster cars in longer races. He began racing full-sized stock cars when he was 15, winning Rookie of the Year honors. In 2015, he joined the LFR Driver Development Group—a team in Mooresville, North Carolina, that coaches and develops race car drivers. He hopes it’s a step on his way to a career as a NASCAR driver.

That same year, Quin’s whole family slammed on the brakes when his mom, Kate, was diagnosed with cancer for the second time. Doctors at a local hospital told her that they could manage it with medication but that she’d likely live with cancer for the rest of her life. “We were pretty devastated by that,” Quin says.

The family sought a second opinion from Duke’s Kimberly Blackwell, MD, who recommended a more aggressive treatment plan. They liked what they heard. “They said we would grab it by the horns and try to completely beat it,” Quin says.

Quin labeled his race car with the motto “BeatinCancer” in pink to honor his mother as well as his grandmother, who is also fighting breast cancer. “At every track I went to, it hit a lot of people’s hearts; they have family and friends fighting cancer too,” he says.

While staying in the Durham area for six weeks of treatment, Kate boarded her horse at a nearby barn and used the time away from home to get in as much riding as she could. “We treated this journey trying to beat cancer as an adventure,” she says. Now the cancer that had appeared throughout her body is not detectable on images. “My doctors are cautiously optimistic,” Kate says.

Quin says, “Duke’s plan worked perfect. Now instead of living with cancer, my mom is living the way she is meant to live—cancer free.”

The family was so happy with the outcome that Quin has changed his car’s motto from “BeatinCancer” to “BeatinCancerwithDuke.” He has set up a website—beatincancerwithduke. org—where he asks friends and fans to donate to Duke Cancer Institute research. Quin is donating half of his prize winnings from his top 10 finishes in 2016 to the cause.

“Cancer is an awful thing, and my whole purpose in this is to give back to Duke and let people know that if you or someone you know is fighting cancer, you’re not alone,” Quin says. “This is beatable, and you can overcome it.”