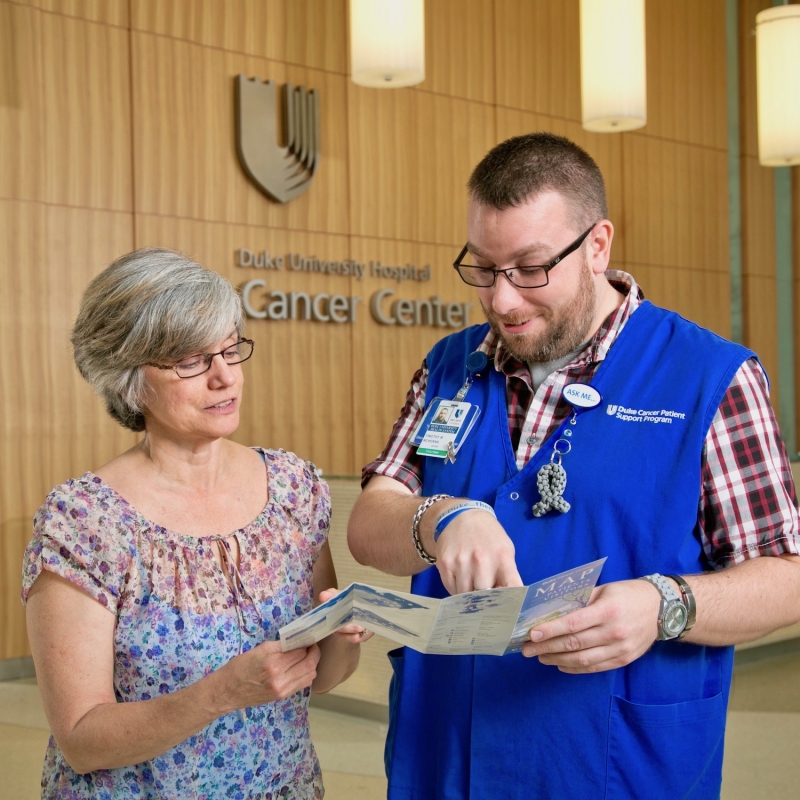 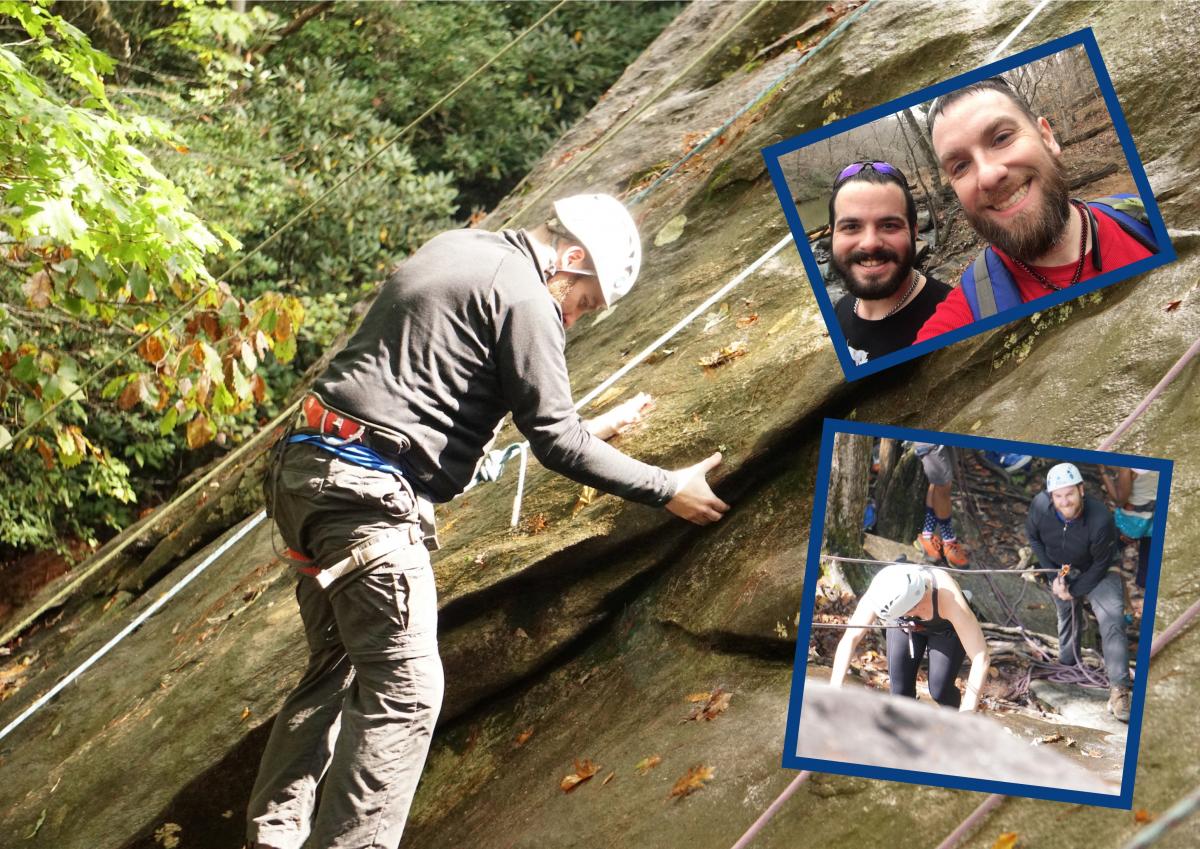 A key part of brain cancer survivor Tim McKenna’s physical and emotional healing process been spending time outdoors camping, kayaking, hiking, and even rock climbing — whether with his partner and caregiver Josh Mattes (top right) or with young adult cancer survivors McKenna’s met through the Duke Teen & Young Adult Oncology Program and First Descents.Substitute teacher Tim McKenna, was teaching history at the Durham School of the Arts on April 10 when a gas explosion ripped through a downtown Durham office building and coffee shop on the next block.

“Foam baffles started coming down from the ceiling and I just ran into the hall and grabbed whatever kid I could and pulled them into the classroom,” said McKenna, 35, who sheltered in place with his middle school students. “They were a bit freaked out but all we could do was keep going with the class until we were evacuated out.”

The reality of what had just happened didn’t really hit him, he said, until he got home and was sharing with his partner Josh the frightening events that had taken place.

“It just put a different spin on life,” said McKenna reflecting back on that day that left two dead and 15 injured, some seriously.

He likened it, in a way, to the mental impact of being diagnosed with a brain tumor four years ago.

“In March of 2015 my life changed forever; I was a couple months shy of my 32nd birthday when I found out that there was a tumor growing in my brain,” said McKenna, who at the time had just started a new job as a contracted field agent for an insurance company. “It was the beginning of what would become a very different journey from the path I envisioned.”

Burned out from seven years of teaching middle and high school English literature and history just outside Boston, near where he’d grown up, he’d followed his heart in the summer of 2014 and moved south to Durham.

He’d studied for months to get certified to sell insurance, an occupation he believed would be more profitable than teaching and give him the fresh start he needed.

Determined not to give up on his new career, McKenna worked up until the day of his surgery, April 1. At resection, his Duke surgeon Allan Friedman, MD, diagnosed him with a grade 2 malignant astrocytoma — brain cancer.

“I ended up having to resign,” shared McKenna. “It was all new information and my memory, following surgery, was impacted big time. That’s how I got onto the path I am now.”

That path included volunteering with the Duke Cancer Center Patient Support Program when cabin fever kicked in six months into his recovery.

In October 2015, he officially became a docent at the Duke Cancer Center Durham, greeting patients and caregivers and helping them navigate the center’s facilities and programs.

Then, in the New Year (2016), and very much to his surprise, he returned to his first love teaching.

“It was nowhere on my list of things to ever do again, but it was something that came naturally to me,” reflected McKenna.

Brain cancer survivor Tim McKenna (posing here with his surgeon Allan Friedman, MD) has run, walked and/or volunteered at Angels Among Us, The Preston Robert Tisch Brain Tumor Center’s signature fundraising event, every year except the year he underwent surgery. He’s manned the event’s survivor tent; greeting patients, survivors and their loved ones. This April, for the first time, he formed his own team "Pirates of Kaos" named, in part, after his dog "Pirate" that he adopted during his recovery.By early 2017, he was substitute teaching four days a week. He returned to refereeing middle and high school soccer games and teaching Kung Fu; something he’d done back in Massachusetts.

In June 2017, however, McKenna experienced a setback. Having just arrived home after a day of volunteering at the cancer center, he collapsed.

“The next thing I knew the paramedic was waking me up on the floor,” said McKenna who learned he’d had a seizure, a side-effect of the brain surgery. Luckily his housemate, a PhD student in neurobiology, was there and had called 911.

Currently on anti-seizure medication, McKenna hasn’t had a seizure since.

He’s continued his rigorous routine — substitute teaching four days a week and regularly refereeing soccer games. Volunteering on the day he’s not teaching, he spends mornings at the cancer center as a greeter and afternoons chronicling cancer patients’ “living histories” from their hospital bedsides.

Interacting with patients, McKenna said, has helped him come to terms with his own cancer journey. It’s both therapeutic and something he genuinely enjoys.

In fact, McKenna said he’s now seriously looking into training to be a certified patient advocate with Duke Cancer Center.

Maybe this is the next career turn for this soft-spoken two-time survivor — of a brain tumor and then a blast.

He’s not entirely sure. But one thing is for certain.

Whatever he chooses to do, those who love him are certain it involves reaching out to help others — even if that means pulling them to safety.