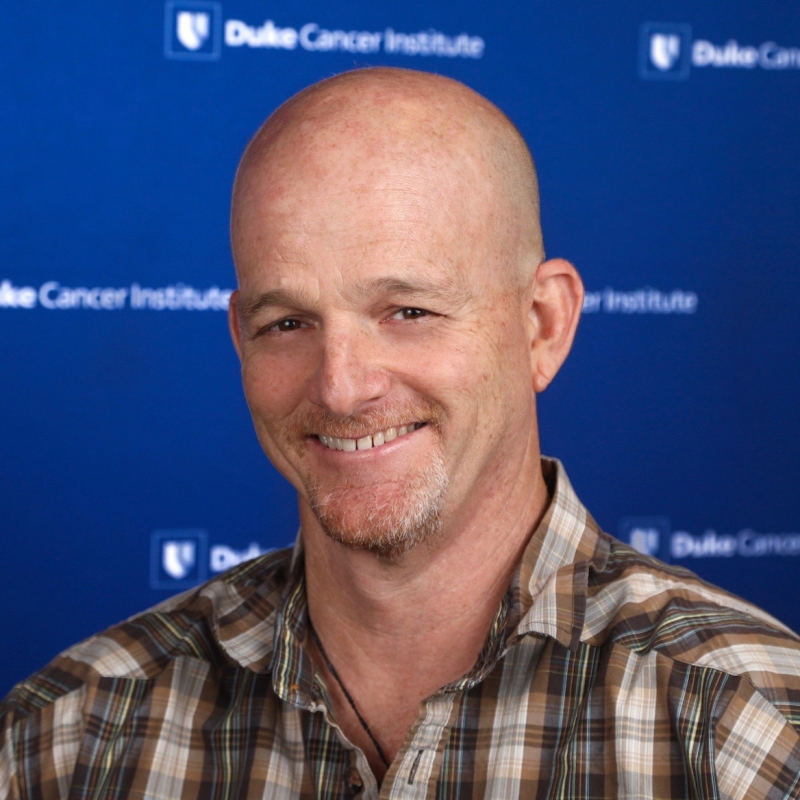 Join the fight against sarcoma. Step out this Sunday, Sept. 9, for the 9th Annual Strike Out For Sarcoma 5K and Family Run.

Bob Thomas, who was given a terminal metastatic cancer diagnosis nearly eight years ago, is not precisely sure exactly which cancer he survived. All that matters to him is that he’s alive and thriving, in large part, thanks to treatment he received at Duke.

“It was a pretty bleak outlook,” said Thomas, who in September 2010 was faced with more than 100 tumors in his lungs and questions over whether it was melanoma or sarcoma, “but whatever it was, it went away just about as fast as it came.”

An avid cyclist for many years, Thomas had spent many Saturdays riding for four or five hours bent over the handlebars wearing no sunscreen; his bald head exposed to the sun. So, when the Raleigh resident’s primary care physician found a suspicious lesion on the back of his neck in March of 2010, he wasn’t entirely surprised.

“They thought it was nothing and they cut it out and said I was fine to go home,” recalled Thomas, who at the time, had counted himself lucky to have come away with what his doctor said was a very treatable squamous cell carcinoma.

Four months later, though, a sore spot developed behind the previous spot. That, too, was excised. This one was determined initially to be a fibroxanthoma (a superficial sarcoma) and later re-classified by Mayo Clinic as an undifferentiated neoplasm with epitheliod features — basically an unknown cancer.

Thomas’ doctors in Raleigh were a little worried that the cancer had returned, and that it still wasn’t something they could exactly define, Thomas said, so they advised 30 rounds of radiation.

“During those treatments, in September, I had my first son, and it whacked me pretty good,” said Thomas, who suffered night sweats and fevers. “I was just weak. I tried to exercise, but I couldn’t breathe. I was coughing all the time.”

His doctor said his “not feeling great” was probably due to simple side-effects of the radiation, but Thomas wanted to get a chest x-ray just to be sure. He floated the idea by his two-week-old son’s pediatrician while at the newborn’s exam and the pediatrician agreed. 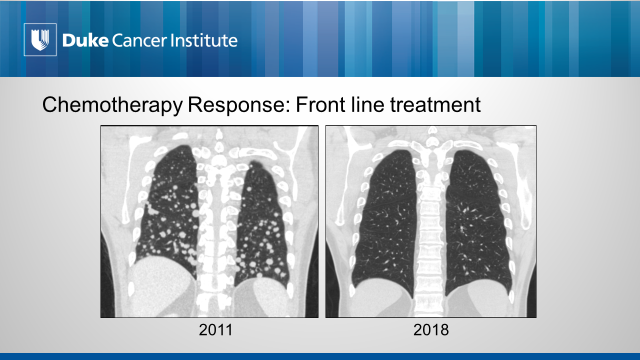 This is a slide that Bob Thomas' oncologist Richard Riedel, MD, presented at a recent academic conference. The first image (at left) shows the “tremendous burden of disease” in Thomas’ lungs, explained Riedel, and the second image (right) is what his lungs look like now. At his Thomas’ request, his primary care doctor performed the scan.

“He called me soon after and said "You need to get in touch with your oncologist today; you’ve got a bunch of tumors in your lungs,"" remembered Thomas. "As you can imagine, the prognosis wasn’t good. It went from ‘it’s nothing’ to you’ve-got-a-couple-months-to-live type scenario."

At that point, Thomas looked to Duke Cancer Institute in Durham. His lung tissue was biopsied.

“We had a multidisciplinary conference where we reviewed Mr. Thomas’ case," said his oncologist Richard Riedel, MD. “The consensus at the time was that the pathology was most suggestive of metastatic sarcoma. Given his significant symptom burden and the need to begin therapy, the decision was made to treat it as such."

That November (2010) Riedel started him on the AIM combination regimen (Adriamycin® + Ifosfamide + Mesna),the most aggressive chemotherapy treatment for advanced (metastatic) sarcoma that Riedel could give him — and one which causes meaningful tumor shrinkage in only about 35 percent of patients.

"Dr. Riedel promised to fight the cancer with me as long as I could handle it, but he was honest with me," said Thomas. "He said that if he treated me and it closed this disease down for three or four months, he’d consider it a success."

Thomas spoke with a friend of a friend with melanoma who’d been given a month to live, but who’d already surpassed that by five years. She told Thomas not to focus on the statistics or worry about the prognosis.

Together with treatment, Thomas, then 42 years-old, did a lot of meditation and praying. He also went on a special diet.

"Within a few weeks of receiving the first treatment, Bob had a significant improvement in his symptoms," Riedel said. "After starting treatment, however, pathology from Memorial Sloan Kettering returned with a diagnosis of melanoma, not sarcoma. The chemotherapy regimen being used was not a regimen commonly used to treat melanoma, but given Mr. Thomas’ symptomatic improvement, the decision was made to continue that chemotherapy.”

While Thomas told Riedel that he "felt pretty good for a guy dying of cancer," he nevertheless vowed to stop treatment if there were no visible changes to his condition.

After three rounds of chemotherapy, imaging was performed. 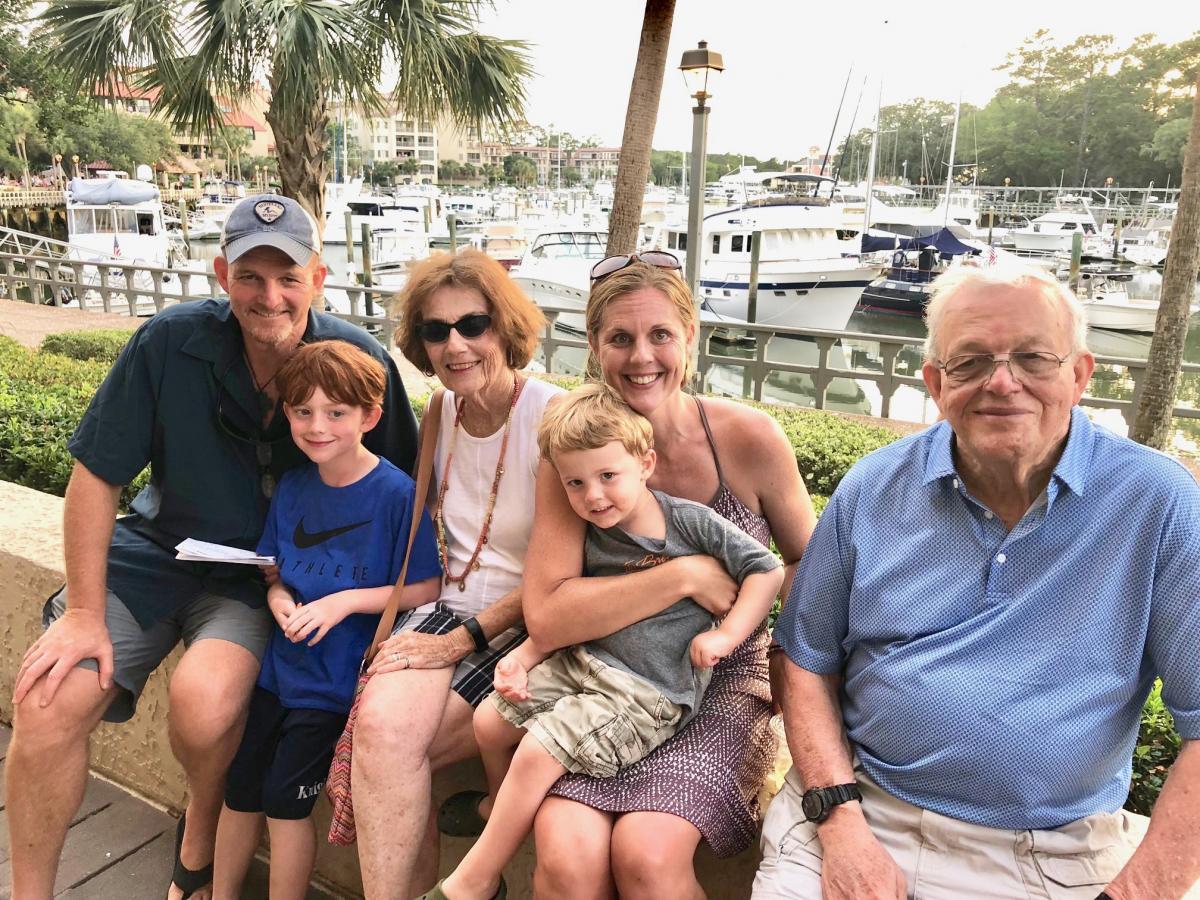 "If I live to be 80 years old, cancer may have been the best thing that ever happened to me," said Bob Thomas, pictured above in Hilton Head, South Carolina, earlier this summer with his parents Jim and Carol Thomas, his wife Candace and sons Johnathan and Jake. “It probably made me a better dad, a better husband, a better friend, a better person.”“Dr. Riedel ordered the scan, and later, after getting the results, he said, "I don’t know what to tell you, but half of the cancer in your lungs is gone,"" recalled Thomas, whose cough and shortness of breath had already gotten better.

Every three weeks from November through March he underwent treatments. At the completion of six rounds of chemotherapy, imaging revealed near complete resolution of the previously seen innumerable small lung tumors.

“Basically his disease melted away after four-and-a-half months of chemotherapy,” said Riedel. “Bob is the only patient that I have had in the last 11 years, given his burden of disease, for whom I’ve seen this degree of response. He’s a remarkable individual.”

Riedel has continued to discuss Bob Thomas’ case at conferences. There’s lingering uncertainty about his diagnosis. Duke pathologists later amended all their reports to “melanoma,” based on the review performed at Memorial Sloan Kettering, but Riedel said he’s “not entirely convinced of that diagnosis given Thomas’ incredible response to a sarcoma regimen.”

As for Thomas, he said he doesn’t dwell too much anymore on whether it was melanoma or sarcoma. Seven years since he was cleared of cancer, he’s busy managing his manufacturing business and keeping up with his family.

The two-week-old baby that he thought he’d never see grow up is now seven years old and he now has another son, “our miracle baby,” who’s three.

“I think Dr. Riedel is pleasantly surprised every time he sees me,” said Thomas, who goes for follow-ups every six months. “I’m sure, with the cancer he’s in, he doesn’t have a lot of stories like mine, unfortunately.”

Riedel remembers the day, early on, that Thomas’ wife came to him and told him, “He’s going to be your miracle patient.”

“I told her that I’d want nothing more than for that to be the case,” recalled Riedel. “Sure enough, she was right.”