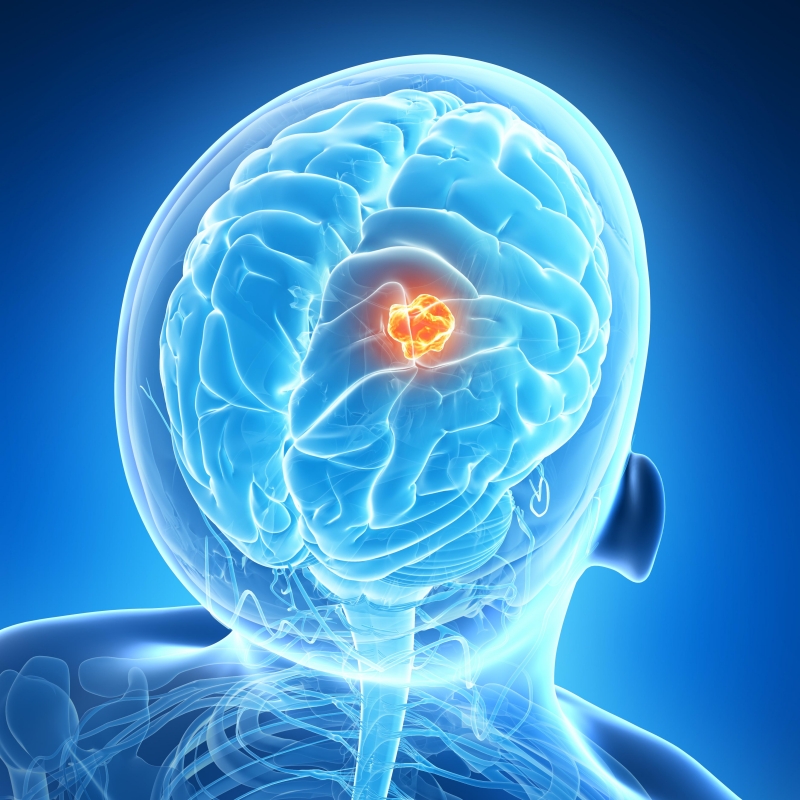 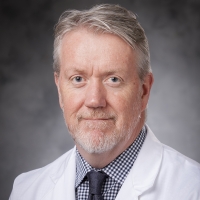 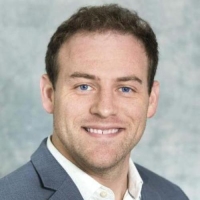 The Neuro-Oncology Research Program is one of the largest and most well-known brain tumor research and clinical programs within the DCI. It is the oldest established cancer program at Duke, having been established by Dr. Barnes Woodhall, who came to Duke from Johns Hopkins in 1937 and immediately began brain tumor research and clinical programs. As the second Chancellor for Health Affairs at Duke, Dr. Woodhall strongly supported brain tumor research clinical activities. The Neuro-Oncology Program has been designated as a Program of Distinction by the previous Chancellor, Dr. Victor Dzau.

The heart of the Neuro-Oncology Research Program is the Preston Robert Tisch Brain Tumor Center (PRTBTC), a Board of Trustees-designated center in honor of a major philanthropic gift from the Tisch family. Within the program, research ranges from the most basic types of genomic research to epidemiology and causation efforts. The following areas are the highlighted areas of research: basic genomics research; establishment of xenografts of all types of adult and pediatric brain tumors and using them to screen drugs and other agents; development of transgenic models of brain stem gliomas to identify driver oncogenes; development of oncolytic virotherapy of primary and metastatic CNS tumors with genetically recombinant poliovirus; development of peptide dendritic cell and other types of cell, and antibody-based immunotherapy; development of monoclonal antibodies, single fragment chain antibodies, and immunoconjugates with bacterial toxins and radioactivity; design and execution of Phase I, II, and III clinical trials; and molecular epidemiology studies to identify causation factors of malignant brain tumors. A final goal of the Neuro-Oncology Program is the maintenance of a brain tumor tissue bank, which has been in operation for more than 30 years.

The success of our ability to function as an outstanding example of team science with our collaborators Bert Vogelstein at Hopkins and Ira Pastan at the National Cancer Institute (NCI) has been recognized by the American Association of Cancer Research (AACR). We won, on our first submission, the Annual AACR Team Science Award in 2014. In 2015, two novel immune approaches developed at the PRTBTC to treat deadly brain tumors received nearly $7 million in funding under the NCI’s prestigious Outstanding Investigator Award program. The award recognizes the work of principal investigator Darell Bigner, M.D., Ph.D., director of the PRTBTC. Dr. Bigner and the other 42 recipients nationwide were selected for, “providing significant contributions toward understanding cancer and developing applications that may lead to a breakthrough in biomedical, behavioral, or clinical cancer research,” according to the NCI.

Malignant primary brain tumors are the most frequent cause of cancer death in children and young adults. Our overarching SPECIFIC AIMS, as listed below, are: to develop prevention and better diagnosis and treatment of primary malignant brain tumors in children and adults.

Focus Area 1: Molecular Studies - The World Health Organization lists more than 126 types of brain tumors. The Neuro-Oncology Program aims to conduct comprehensive genomic, epigenomic, proteomic, and metabolomic studies on all the major types of adult and childhood malignant brain tumors to identify clinical relevant biomarkers of each malignant brain tumor type. New therapy based on this information will be developed, particularly against driver oncogenes.

Focus Area 2: Pre-clinical Drug Testing - The Neuro-Oncology Program has foundation funding to identify active and inactive compounds against more than 80 xenograft models of human malignant brain tumor types. Drugs and biologic agents are obtained from pharmaceutical and biotechnology companies and DCI members and tested in those orthotopic xenograft models at no cost to the companies or investigators. This no-cost work for them is extremely important in obtaining very broad access, greater than usual, to new agents from those companies.

Focus Area 3: Murine Models - To develop improved glioma, embryonal and other mouse models that recapitulate the genetic alterations of the human disease and to determine the function of novel drivers. For example, IDH1 and K27M histone mutations have been described in 80% of diffuse gliomas or high-grade brain stem gliomas, respectively,making them the most common mutations in the brain tumor subtypes.

Focus Area 4: Virotherapy - To develop oncolytic virotherapy of primary and secondary CNS tumors with genetically recombinant poliovirus through basic mechanistic and clinical translational studies. A broad range of research initiatives is being conducted to establish a novel form of cancer immunotherapy based on tumor targeting with poliovirus recombinants with tumor-selective cytotoxicity.

Focus Area 5: Active Immunotherapy - The PRTBTC has been an international leader for decades in the development of peptide vaccines, dendritic cell vaccines, and other types of cell- and antibody-based immunotherapy. There is concerted effort toward developing peptide vaccines against low grade gliomas and brain stem gliomas.

Focus Area 6: Immunoconjugates - To develop monoclonal antibodies and fully human, affinity-matured antibody fragments reactive with molecular targets on primary brain tumors for diagnosis and therapy. Immunoconjugates with new conjugation technologies for radioisotopes such as 211Astatine and 177Lutetium, bacterial toxins, and chemotherapeutic agents suitable for treating both primary and metastatic brain tumors, as well as some systemic general cancers from other programs are being developed. Parallel development of imaging approaches are high priority.

Focus Area 7: Clinical trials - The design and execution of Phase I, II, and III clinical trials with improved dose escalation designs for brain tumor patients are one of our highest priorities. Examples of these innovative trials are genetically-modified poliovirus trials, immunotoxin trials, and peptide-based trials. Convection-enhanced delivery with innovative imaging is high priority.

Focus Area 8: Causation - The only known external cause of malignant gliomas is ionizing radiation. A major aim of the Neuro-Oncology Program is to conduct molecular genetic and epidemiology studies to identify additional causation factors so that prevention of malignant brain tumors can be implemented. Identification of a common genetic predisposition will provide information on exposures that could modify glioma risk by interaction with such genetic factors. Preventing exposure to ionizing radiation has prevented brain tumors.

Focus Area 9: Biobanking - To maintain, in concert with the DCI General Biobank, a brain tumor repository to support Focus Areas 1 through 8.

Hai Yan, Darell Bigner, and Roger McLendon discovered mutations in IDH1 and IDH2. These are the earliest and most common genetic alterations identified in lower grade and progressive gliomas; they define a clinically distinct subtype of gliomas and they impact cancer cell metabolism and the epigenome. The Biospecimen Repository and Processing, Information Systems, Biostatistics, and Cancer Center Isolation Facility Shared Resources made this work possible.

Hai Yan, Darell Bigner, and Roger McLendon also discovered point mutations in the TERT promoter, which occur with high frequency in cancers of the CNS, melanomas, hepatocellular and bladder carcinoma, liposarcomas, and squamous cell carcinomas of the tongue. A combination of the TERT promoter and IDH will become universal diagnostic markers for malignant gliomas. The Biospecimen Repository and Processing, Information Systems, Biostatistics, and the Cancer Center Isolation Facility Shared Resources made this work possible.

Yiping He has discovered that the histone modifying genes, MLL2 and its homologue, MLL3, have inactivating mutations in numerous cancer types including MB. These alterations suggest new opportunities for therapeutics and highlight an urgent need to understand their functional mechanism. The Biospecimen Repository and Processing and Cancer Center Isolation Facility Shared Resources made this work possible. This work was also funded by a pilot grant sponsored by the DCI.

Oren Becher has established critical collaborations with C. David Allis (Rockefeller University) and Cynthia Hawkins (University of Toronto) that have allowed the identification of histone mutations that are found in up to 80% of DIPGs and a mutated receptor that serves as a novel driver for DIPG which is found in 16% of human tumors, respectively. Novel genetically engineered mouse models of DIPG developed by Dr. Becher will allow the rapid development of therapeutics targeted to these tumor-specific mutations. The Biospecimen Repository and Processing, Cancer Center Isolation Facility, and Transgenic and Knockout Mouse,  Shared Resources made this and related work possible. This work was another example of work funded by a pilot grant sponsored by the DCI.

John Sampson and Darell Bigner have developed bispecific T-cell engagers (BiTEs) from single-chain variable antibody fragments (scFvs) that recognize the CD3ε subunit on T cells and the tumor-specific mutation, EGFRvIII, on tumor cells. This creates a molecular "tether" between T cells and tumor cells without major histocompatibility complex restriction, resulting in highly-localized and specific activation with concomitant tumor lysis. This BiTE achieves durable, complete cures within preclinical models and is in the process of being translated to a Phase I trial for patients with GBM. The Biostatistics, Flow Cytometry, Cancer Center Isolation Facility, and Transgenic and Knockout Mouse, Shared Resources made this work possible, which was also funded by a pilot grant sponsored by the DCI.

Darell Bigner and John Sampson have developed a recombinant immunotoxin (RIT), composed of an antibody fragment genetically fused to a potent toxin such as Pseudomonas exotoxin (PE), that targets wild type and mutant EGFRvIII simultaneously. The dual specific RIT, D2C7 avidly kills GBM cells in vitro and in vivo. An IND is now in the submission process for a D2C7-IT Phase I clinical trial. The toxin will be delivered by CED and monitored by co-infused 124I-albumin and Gd-DTPA.

The clinical staff of the PRTBTC was involved in the accelerated FDA approval of bevacizumab for recurrent GBM (GBM) and is currently enrolling in a Phase III multicenter trial of CDX-110, an EGFRvIII-directed vaccine developed at Duke. They have also been pioneers in characterizing quality of life and neurocognition in the neuro-oncology patient population and in designing approaches to combat fatigue and a lack of exercise, both independent predictors of survival in these patients.

The Biostatistics and Bioinformatics Shared Resources are critical resources enabling these activities:

Dora Il'yasova and Joellen Schildkraut (Cancer Control and Population Science), confirmed the consistency of the inverse association between history of atopic conditions and glioma risk and identified the most robust way of assessing history of atopic conditions and demonstrated the influence of the inherited glioma risk variants in chromosome regions 9p21.3 and 20q13.3 on the inverse association of allergy and glioma. Dora Il'yasova, PI of the international GLIOGENE study, also identified a locus for glioma susceptibility at 17q12-21.3 with the possibility of four additional risk loci at 6p22.3, 12p13.33-12.1, 17q22-23.2, and 18q23.

The Biospecimen Repository and Processing, Bioinformatics, Information Systems, and Biostatistics Shared Resources made this work possible:

Roger McLendon, Chief of the Brain Tumor Biorepository, has distributed more than 6,000 cases to 45 collaborators both at Duke and elsewhere to support basic and translational discoveries. The PRTBTC Biorepository achieved certification under the College of American Pathologists’ Bioreopository certification program. Two papers derived directly from these distributions were cited as among the most significant discoveries in oncology in the last five years (2005-10) by Nature Medicine. 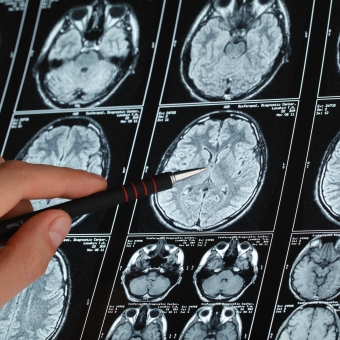 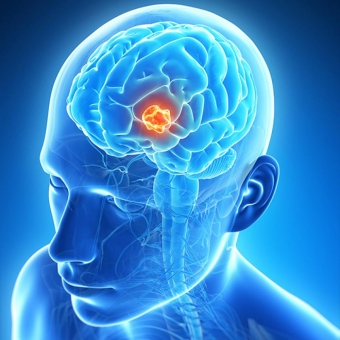 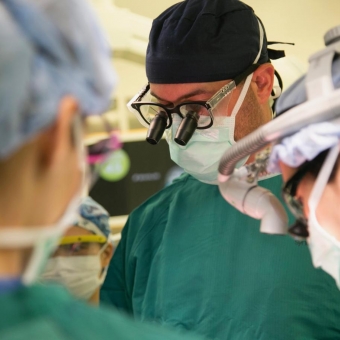