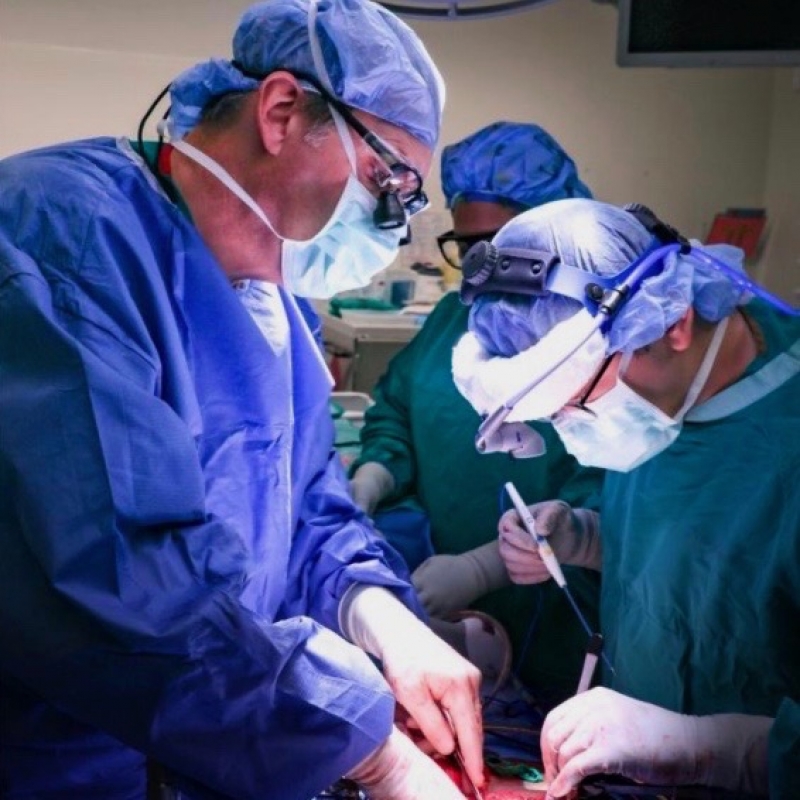 For this incurable disease, this ounce of prevention could be worth a pound of cure

Pancreatic cancer is a very difficult disease to cure. It’s projected to be the number two cancer killer in America within this decade.

According to the most up-to-date figures from the American Cancer Society, released in this January (2017-2018 data), it’s already at number three — trailing lung and colorectal cancer.

Pancreatic cancer is rare. It will account for only 3% of cancer diagnoses this year, but it will be implicated in 8% of all cancer deaths. It has the highest mortality rate of all major cancers.

“More than 60,000 people will be diagnosed with pancreatic cancer this year,” said Peter Allen, MD, Chief of the Division of Surgical Oncology at Duke, “and nearly all of them will die from this disease within five years because of late stage at diagnosis and the relative ineffectiveness of current systemic therapies. There is an urgent need for novel strategies to improve patient outcomes for this disease.”

Allen has devoted the better part of the last decade researching ways to move those numbers by nipping this lethal disease in the bud.

The trial, for which Allen is principal investigator, is multi-institutional. The other sites include Johns Hopkins University, Massachusetts General Hospital and Memorial Sloan Kettering Cancer Center. Allen has long worked with research colleagues at these institutions as part of the Pancreatic Surgery Consortium.

“This trial represents the first of its kind for pancreatic cancer,” said Allen, going on to describe how this randomized, double-blind, placebo-controlled phase 2 study will track progression of disease — from a pre-cancerous to a potentially-cancerous state. “Surveillance and/or pancreatic resection is the current clinical practice for pre-cancerous cystic lesions (IPMN) of the pancreas. Patients will be actively surveilled throughout a three-year treatment course of the nonsteroidal anti-inflammatory drug sulindac.”

Approximately 10% - 15% of the general population have cystic neoplasms (also called lesions or tumors) in their pancreas. The majority are benign and cause no symptoms. About half of these cysts are the IPMN type that Allen is studying in this trial, short for intraductal papillary mucinous neoplasms of the pancreas.

It’s believed that only a minority of these IPMNs progress from their benign low-grade state through to high-grade and invasive carcinoma — an estimated 35 to 40% — but when they do morph into a high-grade, pre-cancerous state, they can cause significant inflammation in and damage to the pancreatic ducts.

Clinical data from Allen and his research colleagues in the Pancreatic Surgery Consortium has shown a strong association between inflammation and cancer progression in patients with high-grade IPMN of the pancreas.

Most pancreatic lesions, including IPMNs, will be found “incidentally” during MRIs or CT scans for non-pancreas-related conditions. They’re being identified more and more often, largely owing to improved detection technologies.

When high-grade IPMNs are discovered, said Allen, this represents the only radiographically identifiable precursor lesion of pancreatic adenocarcinoma. It is these lesions that are often recommended for surgical removal — a partial pancreatectomy — because of their likelihood of turning cancerous and causing even more damage to the pancreas.

“IPMN is a whole-gland process. It’s known that patients who undergo partial pancreatectomy for IPMN have an increased risk of developing cancer in the part of the pancreas that’s left in the body,” Allen explained. “Between our four centers, we were already following more than 450 patients who had undergone resection for IPMN when we designed the trial. Recent data from our group has shown that approximately 25% of these patients will develop radiographic signs of IPMN progression within three to four years of surgery.”

The 3P-C drug sulindac, a COX-2 inhibitor and anti-inflammatory medication, has been shown in a single small observational study to potentially decrease the size of IPMNs in the patients who harbor them. And the drug has proven to be highly effective at preventing a progression to malignancy in pre-clinical (mouse) models. Allen is hoping that sulindac will prevent progression of IPMN in patients enrolled in this study.

Patients identified to have what is considered high-risk IPMN are eligible for this study.  Each patient on the 3P-C trial will undergo a CT or CT angiogram in order to rule out any evidence of cancer before starting the sulindac or the placebo.

All trial participants will be closely monitored. They’ll receive alternating CT scans and endoscopic ultrasounds/fluid aspiration of their pancreas over the course of treatment. Participants will also have bloodwork done regularly, including complete blood count (CBC), comprehensive metabolic panel (CMP) and screening for tumor marker CA 19-9, which can signal the presence of pancreatic cancer.

During the study, Allen and the other investigators will utilize and evaluate a novel radiographic (radiomics) approach to detecting IPMN early and track progression, if at all, to malignancy.

They also plan to monitor and collect data on the effects of treatment on IPMN cyst-fluid biomarkers through a special biomarker panel they previously developed.

Allen’s group has already identified in their research, a variety of cyst-fluid biomarkers that are associated with the presence of advanced IPMN in the pancreas. A recently finished validation study further validated these markers, as well as radiographic features that predict the presence of high-grade IPMN.

This is important because whereas low-grade IPMNs don’t necessarily need to be removed, just monitored, identifying high-grade IPMNs for surgical removal before they progress to invasive carcinoma could be potentially curative. Allen can’t stress enough the importance of early diagnosis in pancreatic cancer and its impact on mortality.

“Less than 15% of patients are diagnosed prior to the development of identifiable metastatic disease. Only about 10% of all pancreatic cancer patients are alive five years after diagnosis,” he said. “That's why our studies of biomarkers that would place individuals in a very high-risk group for pancreatic adenocarcinoma, allowing for true early detection, are so meaningful.”

The 3P-C trial has just started enrolling patients at the study’s collaborating institutions. Investigators plan to accrue 200 patients (100 patients/arm) by 2023.

“We've already enrolled a few patients here at Duke,” said Allen. “We're excited about it. I think we're going to learn a great deal from this.”

The Earlier, the Better

The five-year survival rate for locally advanced pancreatic adenocarcinoma, before it spreads, is around 20%. Once it had spread, the rate drops significantly, with regionally advanced at 13% and a metastasis to other organs at 3%.

While patients will have the most meaningful outcome when a pre-cancerous lesion in the pancreas is detected and removed prior to it becoming a true cancer, the next best outcome, Allen explained, is in patients whose cancer is localized and can be safely surgically removed followed by chemotherapy, folfirinox in particular.

“These two treatments combined – surgery and chemotherapy — are really the best hope we currently have. In these early stages, we can effectively treat the cancer so that it does not recur or progress for years to come,” Allen said. “We are seeing more and more patients survive years and years after those treatments are delivered. Unfortunately, they're rarely curative, but we’re clearly headed in the right direction.”

Catching pancreas cancer early is especially difficult. People typically don’t have symptoms until the cancer becomes very large or has already spread to other organs. Because the pancreas is located deep in the body, patients can’t feel benign cysts or early cancerous tumors nor can health care providers detect them during routine physical exams.

Added to this, the symptoms of advanced pancreatic adenocarcinoma — weight loss and abdominal discomfort that may radiate to the back — are common to multiple other conditions, so people might not suspect they have pancreatic cancer.

In some cases, tumors can cause jaundice earlier on, which can lead to an earlier diagnosis. New-onset diabetes may also raise a red flag. (Recent studies have shown that 1% of adult patients diagnosed with new-onset diabetes after age 50 will also be diagnosed with pancreatic adenocarcinoma within three years of the date of their diabetes diagnosis). Typically, however it’s not until very late in the disease that patients experience the kind of severe abdominal pain, nausea, and vomiting that would set off any alarm bells.

All in the Family

“Because these cancers are relatively rare in the general population, and because of our limited ability to detect these cancers on imaging, routine screening is not recommended,” explained Allen.

“We typically assess how much risk there is in the family; how many family members have had pancreatic cancer and at what age did it develop,” said Allen. “For example, if multiple members of one’s family developed pancreas cancer in their 50s or younger, there’s a pretty strong argument that they have significant risk. In this group of patients, we might consider annual imaging such as CT or an endoscopic ultrasound to evaluate for abnormalities in the pancreas.”

Top of the Game

A multidisciplinary team of pancreatic cancer specialists from DCI holds a weekly tumor board led by James Abbruzzese, MD, where they present patient cases and exchange ideas around how best to treat these patients.

“We have a very good program at DCI,” said Allen. “We are really strong in all areas of pancreas cancer therapy — medical oncology, radiation oncology, radiology, gastroenterology, pathology, and surgery — and I do think we have a lot to offer. We’re able to provide any type of intervention that's necessary. We're giving state-of-the-art treatment. We have a great, really solid group with a lot of research going on in this space right now, including looking at specific ways of timing chemotherapy around surgery. Our investigators are also researching ways to incite an immune system response in this cancer that’s not very immunogenic. It will be harder to put those therapies to the test, but we will.”

“We're still relatively underfunded, certainly when we compare federal pancreatic cancer funding to federal breast cancer funding, yet it's really becoming one of the leading killers of Americans. We need to raise the awareness and help to educate the public about what the real challenges are around it, and where the opportunities might be, and then design our research to try to make progress.”

The National Institutes of Health is the sole funder of the 3P-C trial: Preventing an Incurable Disease: The Prevention of Progression to Pancreatic Cancer Trial.

Peter Allen, MD, spoke about his current 3P-C trial at Grand Rounds on March 3, 2021: Watch his presentation "Does the pancreas have an intrinsic microbiome and is this altered in the setting of disease? Lessons learned from IPMN" (find the link to this video presentation via the DCI intranet)