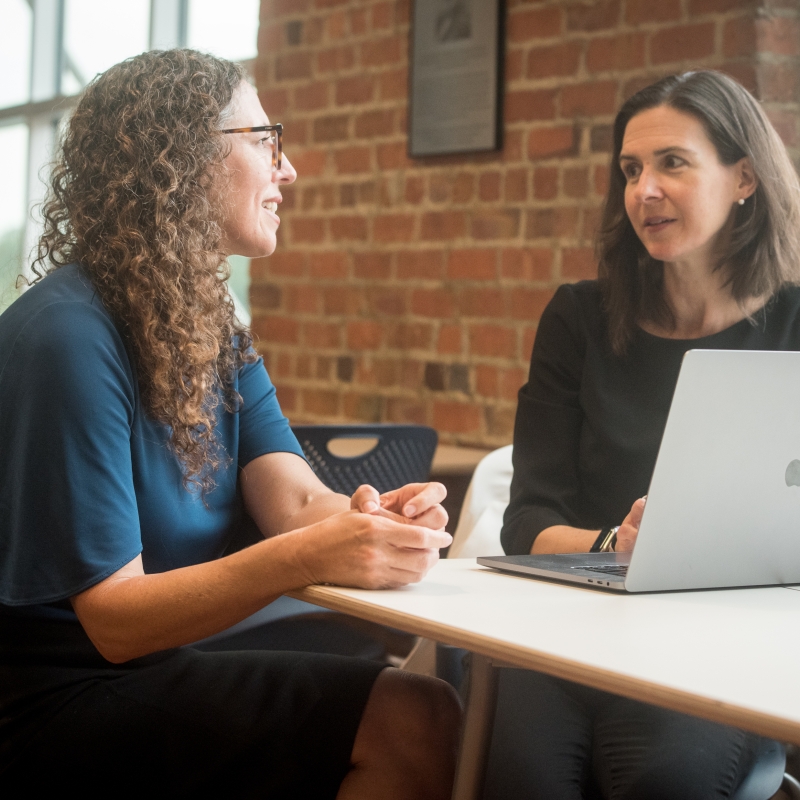 Creating Better Ways to Stop Cancer In Its Tracks

As Duke celebrates more than 50 years of cancer breakthroughs, a new research program works toward a future when no one ever develops cancer.

In 2018, Meira Epplein, PhD, associate professor in population health sciences and medicine, applied an intervention to stop cancer in a setting that most might not expect: a church.

Epplein is an expert in Helicobacter pylori (H. pylori), a stomach bacterium that causes pain, nausea, or ulcers in some people, and no symptoms in others. The bug is also linked to increased risk of stomach cancer. Stomach cancer is rare, but some groups, including African Americans, Asian Americans, Hispanic Americans, American Indians, and those with Ashkenazi Jewish heritage, are more likely to develop it.

In those infected with H. pylori, a two-week course of antibiotics can eradicate the bacterium and reduces risk of stomach cancer by 50%, said Epplein, whose great-grandmother died of the disease.

To reach people at higher risk who might not otherwise get tested and treated, Epplein partnered with Bishop Ronald Godbee of The River, one of the largest African American churches in Durham, North Carolina. Godbee introduced Epplein to the congregation, she spoke about the importance of getting tested, then they hosted a testing event at the church.

Using a breath test, the researchers tested 92 people, 23 of whom tested positive. They received letters about their results and were encouraged to share this information with their primary care doctors and ask to be treated if appropriate. This pilot project is an example of a non-traditional cancer intervention that Epplein and others would like to see happen more often. She and gastroenterologist Katherine Garman, MD, MHS, associate professor of medicine, co-lead the Cancer Risk, Detection, and Interception (CRDI) Research Program at Duke Cancer Institute (DCI). The program brings together gastroenterologists, Ob/Gyns, surgeons, and other clinicians with cancer biologists, epidemiologists, biostatisticians, and others to develop new ways to identify people most at risk for cancer.

The goal is to stop the disease process in the early stages, ideally even before it is considered cancer. “We want to think about stopping cancer before someone ever gets to an oncologist,” Epplein said. “We want to help clinicians think about what’s on that cancer pathway and what you can do, not just to treat the symptoms and what’s going on right now with your patient, but to reduce the risk of developing cancer.”

As a comprehensive cancer center designated by the National Cancer Institute (NCI), Duke Cancer Institute must obtain NCI approval for new research programs, and the CRDI program was officially approved in 2021 to focus on research that falls somewhere between cancer prevention and treatment. 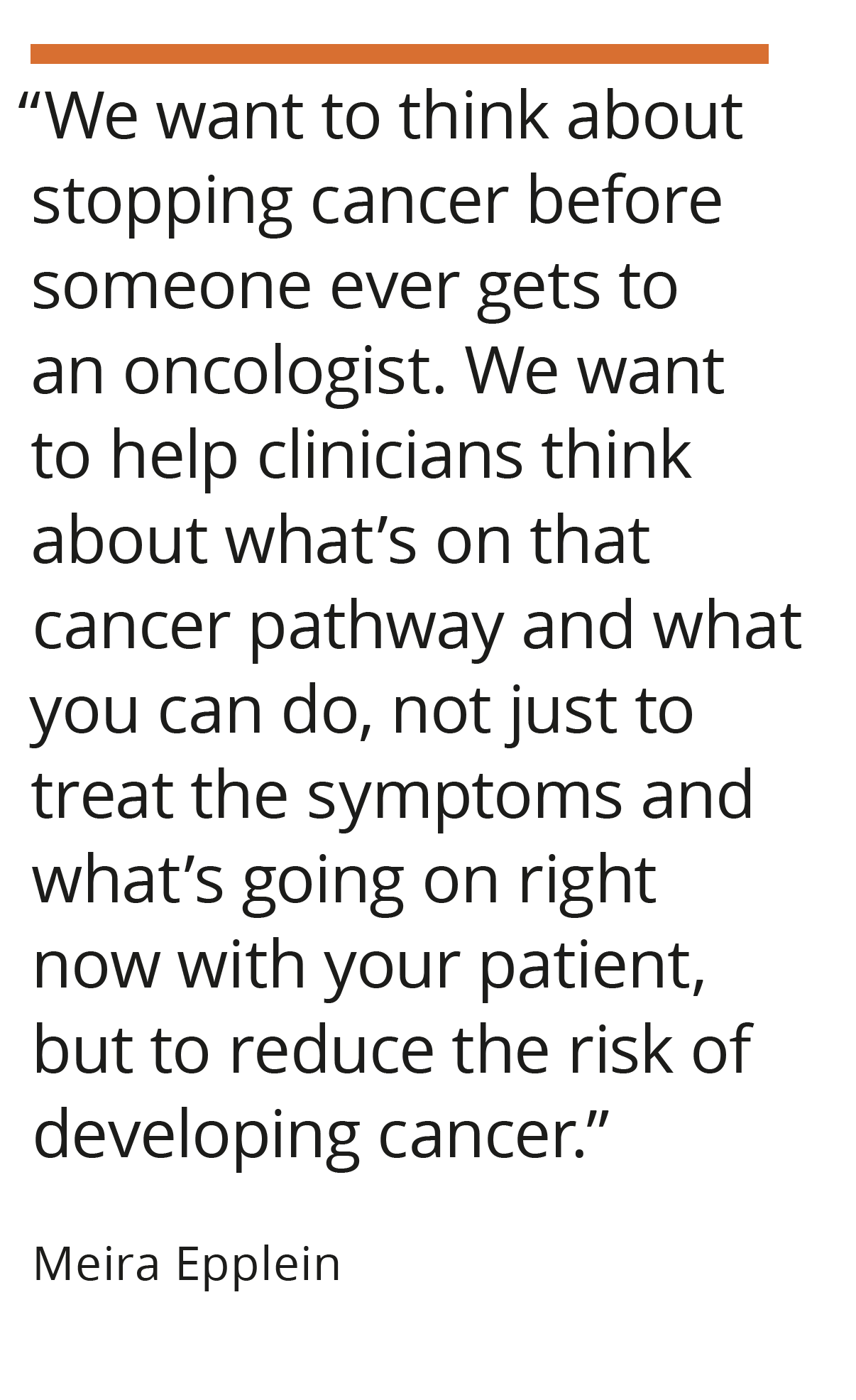 “Quitting smoking is an example of primary prevention, right? But interception means intervening once someone has started down the cascade of events leading to cancer,” Epplein said. She credits DCI Deputy Director Steve Patierno, PhD, with the inspiration for this new niche at Duke, as well as the work of Shelley Hwang, MD, vice-chair of research in the Duke Department  of research in the Duke Department of Surgery, who leads a large national study to determine the benefits of treatment versus watchful waiting for so-called stage 0 breast cancer (also called ductal carcinoma in situ). Hwang is a member of the CRDI program’s steering committee.

Other steering committee members are Heather Stapleton, PhD, the Ronie-Richele Garcia-Johnson Distinguished Professor of Environmental Sciences and Policy in the Nicholas School of the Environment, who explores new biomarkers for interception and early disease risk in people exposed to cancer-causing chemicals, and Evan Myers, MD, MPH, the Walter L. Thomas Distinguished Professor of Obstetrics and Gynecology, who specializes in mathematical modeling and decision analysis.

Program members work in their own labs but meet regularly as a “think tank” to present findings and share ideas for common themes to explore. In addition, members are encouraged to pursue community outreach to share what they learn with the public.

Several scientists in the CRDI program study abnormal tissue that can be a precursor to invasive cancer. Some of these lesions can be easily removed before they turn into cancer, such as colon polyps removed during a screening colonoscopy.

But for many cancers, removal of pre-cursor lesions is more invasive, and knowing which are most likely to turn into cancer isn’t an exact science.

For instance, for both pancreatic cancer and esophageal cancer, pathologists grade the precursor lesions by looking at their size and physical appearance. Peter Allen, MD, professor of surgery and chief of the division of surgical oncology, said that for intraductal papillary mucinous neoplasms (IPMNs), which are pancreatic cysts that can sometimes develop into pancreatic cancer, this grading is imprecise.

“Our problem right now is it is very difficult for us to accurately identify the grade of dysplasia in a patient’s cyst without an operation,” Allen said. “We’re trying to identify RNA or DNA markers in the surrounding fluid that help us more accurately determine the grade.”

Even though only 20% of these pancreatic lesions develop into cancer, a better grading system could save lives, Allen said, because pancreatic cancer is so hard to diagnose in the early stages, when it’s most treatable.

General surgery resident Austin Eckhoff, MD, spent two years performing research in Allen’s laboratory to study these lesions using a technology that was named the “Method of the Year” by the journal Nature Methods in 2020.

“Spatial transcriptomic profiling gives us two technologies together that we’ve been using in science for years,” Eckhoff said. “It gives us both histology, so you can see cells and the overall tissue structure at a magnified level, but then for regions that you select, it lets you know about gene expression.” It’s more precise than bulk RNA sequencing, which shows only the average gene expression from RNAs across a sample of cells, Allen said.

Eckhoff’s studies show that in pancreatic lesions from a single patient, high-grade and low-grade cells grow side by side, just 1.5 millimeters apart. So relying on images alone could cause some high-grade lesions to be missed. “We usually use CT scans to decide if a lesion needs to be resected [removed],” she said. “The sensitivity and specificity of that is only about 60%,” she said.

Early results from this work, published July 2022 in the Annals of Surgical Oncology, using samples from 12 patients, suggest that high-grade lesions have a larger population of immune system cells called macrophages, compared to T cells, which can help fight cancer. The team is exploring further in hopes of finding a RNA or DNA signature for high-grade dysplasia that could be used in the clinic, and to better understand the role that inflammation plays. “We have found that as these lesions progress to cancer, they develop inflammation,” Allen said. “Whether the inflammation is a driver of that progression, or it’s a response to that progression — the chicken or egg question — we don’t know.”

Treating H. pylori is a cancer-prevention tactic that doesn’t happen as often as it should, Epplein said. About half of the world’s population, and a third of the United States population, is infected with H. pylori, she said. But because only about 3% of those people will go on to develop cancer, many doctors don’t test and treat for the bacterium.

Epplein encourages doctors to talk to patients about testing, especially if they are in a high-risk group, have unexplained gastric distress, or have recently immigrated from a high-risk country.

In addition to co-leading the CRDI program, Epplein and Garman work together to understand disparities in stomach cancer and to find a way to identify the cases of H. pylori that are most likely to turn into cancer. Funded with a National Cancer Institute Exploratory Grant (P20), they study banked tissue samples and surveys from people who have been treated for H. pylori to understand the role of family history, diet, exposure to stress, and the strain of the bacterium in people who develop cancer.

In a separate project, Garman uses cells from patients who donate tissue samples after an endoscopy (tissue biopsy of the stomach) to grow “organoids” — masses of cells that resemble a simplified organ. She is fascinated by the unusual patterns she has seen in organoids from patients who have inherited or acquired certain molecular mutations.

Rather than growing in the usual uniform circle, these cells have arms or buds extending this way and that. “The message from these pictures is these molecular mutations are probably really important,” she said. She noted that this is an ongoing area of research.

For instance, studies in the last few years have shown that the BRCA1 and BRCA2 mutations, long linked to increased breast and ovarian cancer risk, are also linked to increased stomach cancer risk, but that isn’t yet taken into account clinically, Garman said. “With some of these molecular approaches, we will have better luck narrowing down the people who will really benefit from invasive screening tests, like an endoscopy where you have to miss a day of work and get sedation,” she said.

The research in the CRDI program is heavy on new technology, but figuring out how to apply it to those who need it most is a priority, Epplein said. “We don’t want everyone going through a mass of invasive screening tests,” she said. “And, at times people who have access to these more advanced tests and screening are those with money and resources. We will need to understand how to make sure certain people aren’t excluded.”

Bringing together these researchers and clinicians from different disciplines has reminded them of the similarities across different cancer types. “We’re looking at very similar aspects of the disease, even though they’re in different organs,” Allen said.

Epplein gives the example of a mutation in the P53 gene, which is common across many cancers. She said the group envisions a future when doctors could better measure each individual’s overall cancer risk. “As we are getting better at developing biomarkers, especially non-invasive ones, we can think more broadly,” she said. 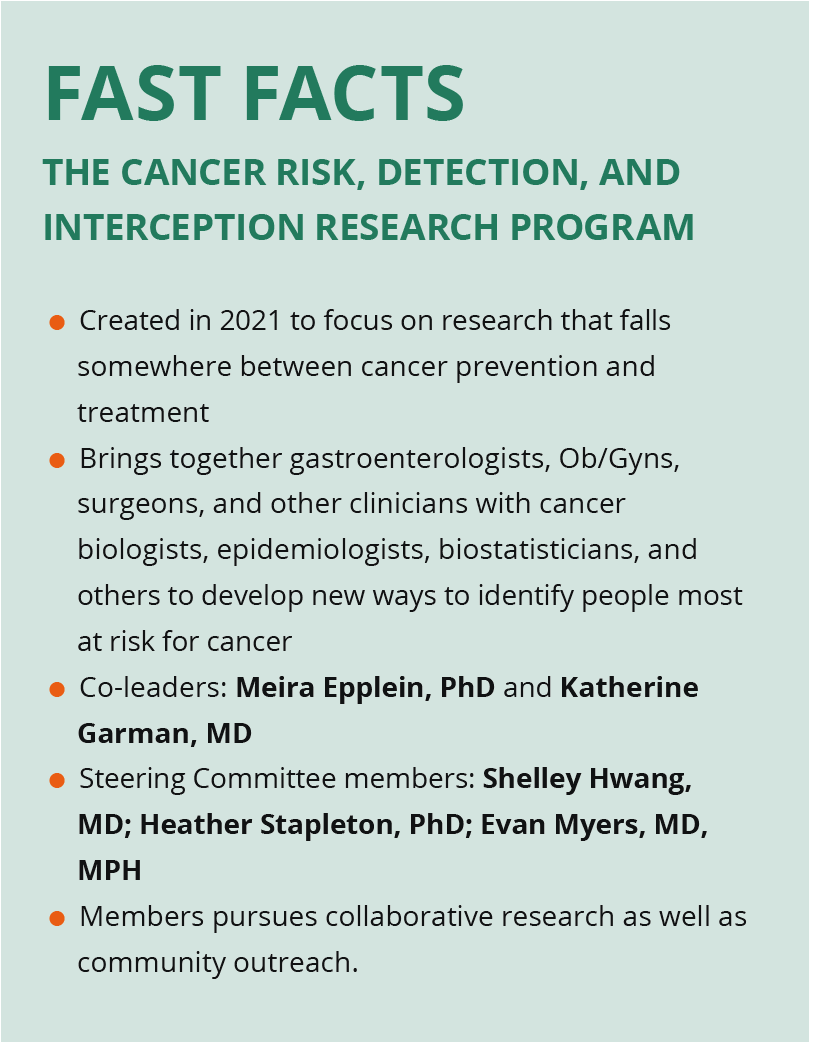 In Search of: Early Diagnosis of Pancreatic Cancer 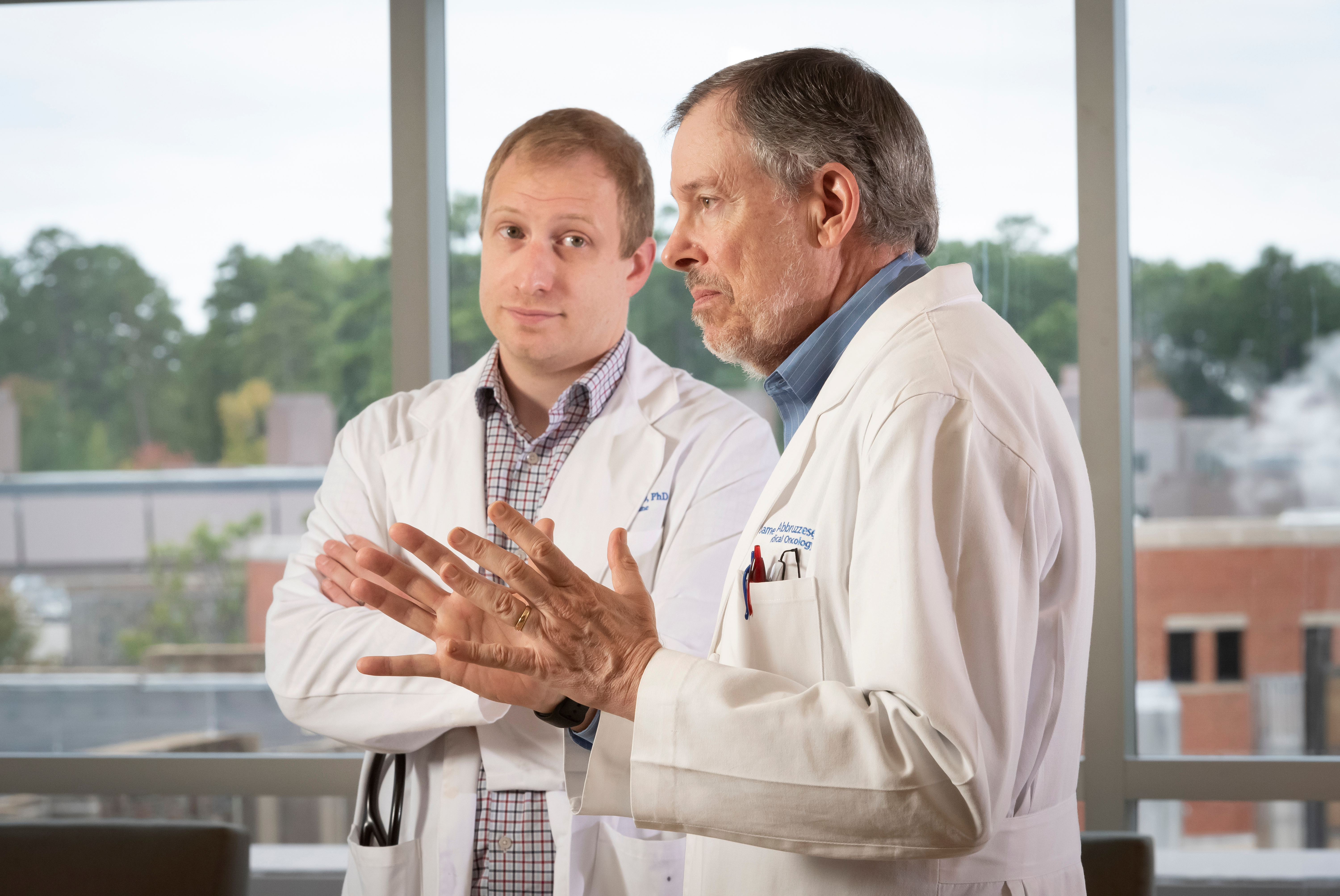 From the lab to the clinic. READ

Read the rest of the Winter 2022 Breakthroughs.