One of Their Own 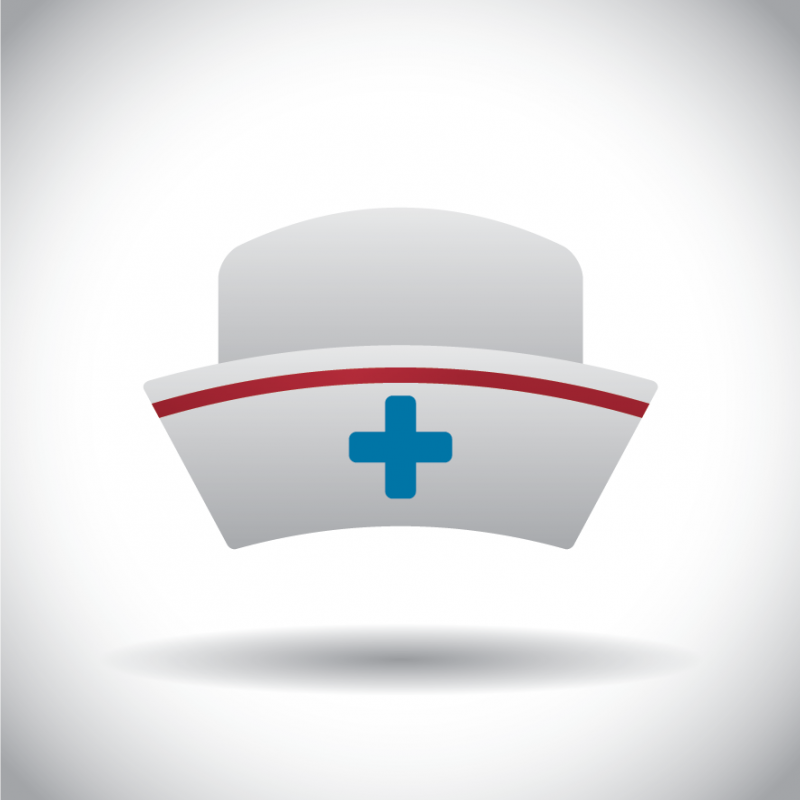 Neil Spector, MD, a nationally recognized Duke physician-scientist, translational research leader, and oncology mentor passed away on Sunday, June 14, 2020, at the age of 63. In September  — Blood Cancer Awareness Month — his widow, Denise Spector, PhD, opened up about his final months spent fighting cancer during a pandemic and expressed her gratitude for “all the brave and wonderful health care heroes who cared for and supported us during his difficult health journey.”

In early March 2020, Neil Spector, MD, was diagnosed with a clinically aggressive post-transplant lymphoproliferative disorder that would, over the course of only three-and-a-half months, lead to two visits to Duke University Hospital’s Emergency Department plus five hospitalizations — mostly in the hospital’s 9100 unit, and finally in one of Duke’s intensive care units where he passed away, shared Denise.

The condition can develop in transplant patients when drugs meant to suppress the activity of the immune system after a transplant (so that the recipient doesn’t reject the transplant) weaken the immune system to the point of allowing either a new Epstein-Barr Virus (EBV) infection or a reactivated EBV infection to proliferate in more and more of the body’s B cells.

The EBV virus latently infects more than 90% of the world’s adult population. Primary EBV infection of the B cells — the antibody producing cells of the immune system — is not usually associated with disease and the infection typically leads to the development of immunity for life. However, if, post-transplant, the body’s T cells, because of the immunosuppressive drugs, are unable to recognize and kill those EBV-infected B cells, the cells can grow continuously and transform into lymphoma.

Dr. Spector’s initial diagnosis — a sub-class of PTLD called polymorphic PTLD with Epstein-Barr virus (EBV) positivity, often has a better prognosis than the PTLD subtypes that behave more aggressively (i.e., monomorphic PTLD and Hodgkin’s lymphoma-like PTLD). This led him to believe that he could overcome this new health challenge with the standard treatment for this condition: a combination of chemotherapy, Rituximab and a reduced dose of the immunosuppressant drugs he’d been taking.

In early March, Dr. Spector was originally cared for on one of the cardiac units of Duke University Hospital because of his heart transplant history. With a diagnosis of PTLD/lymphoma, he’d spend much of his final months being cared for on the 9100 unit of the hospital — where seriously ill blood cancer patients are treated. By May it became apparent, by his clinical decline, that the standard treatment wasn’t working. His disease was suddenly behaving more like a severe aggressive lymphoma.

“Not only did Neil face the extreme physical burdens of living with daily pain, fatigue, nausea, and anorexia, but perhaps, at times more difficult, was the emotional and spiritual distress that we were both immersed in,” shared Dr. Spector’s widow, Denise Spector, an oncology nurse practitioner and nursing educator. “I recognize that for some, caring for Neil as a patient was particularly difficult as they also cared about him as a colleague and mentor in some cases.”

Matthew McKinney, MD, was his primary oncologist. He recalled when Dr. Spector was first recruited to Duke in 2006 by H. Kim Lyerly, MD, to join DCI’s breast cancer program and Dr. Lyerly “couldn't stop talking about how excited he was Neil was coming to Duke.” A few years later, Dr. Spector would be Dr. McKinney’s clinical supervisor for his hematology/oncology fellowship at the Durham VA Medical Center.

“Once I remember needing advice with one of my patients and Neil jumped up from his seat, grabbed his stethoscope, ran over to the exam room, examined then talked through things with my patient, and I knew that patient was in good hands,” said Dr. McKinney, a cell therapy and hematologic malignancies specialist and assistant professor of Medicine. “I learned countless lessons from him, many of which are valuable to me to this day.”

Including the days the mentee found himself providing cancer care for his mentor.

“Taking care of a colleague, mentor and friend for advanced cancer in the age of COVID-19 was harrowing,” shared Dr. McKinney. “On more than one occasion late at night or over a weekend, we had to direct Neil to 9100 for inpatient care because of some medical emergency, knowing that he would be isolated from Denise and his family, and I am sure that was terrifying for them. Medical decisions were somewhat less difficult as Neil and Denise would also get advice from all the oncology colleagues they were familiar with around the world, particularly from the Dana-Farber Cancer Institute.”

“The staff on 9100 were sensitive to the fact that Neil was dealing with a range of health challenges along with tremendous fear, in part due to COVID-19, although Neil tried very hard to show optimism about his treatments and disease outcome,” said Denise.

As a medical oncologist with Duke Cancer Institute and the Durham VA Medical Center, Dr. Spector knew all too well what he was up against, explained Denise, which made facing his situation, in some ways, even more challenging.

Lymphoma was the disease he’d focused on early in his career as a scientist and medical oncologist at Dana-Farber Cancer Institute. In fact, Dr. Spector’s initial laboratory research there was on B cell lymphomas and his clinical practice was directed at taking care of patients undergoing bone marrow transplants to treat blood cancers. Later in his career he would direct the Bone Marrow Transplant Unit at the University of Miami’s Jackson Memorial Hospital.

“The researcher within him, as well as the strong desire to not give up, kicked in and led him to a clinical trial of a T-cell targeted therapy against his EBV- infected B cells,” recounted Denise “While he clung to the hope that this therapy would eradicate the disease, the PTLD was far too aggressive and widespread, which led to multi-organ failure rather quickly.”

Behind the Masks – The Eyes of Compassion

Three months after the death of her husband, Denise put pen to paper (figuratively speaking) to personally, directly and publicly thank and commend the entire 9100 team for their courage in the face of their own fears around COVID-19 and for the team’s ability to continue to provide exceptional care to all their immunocompromised patients.

“While I am still processing the profound pain and intense grief following the passing of my beloved husband, Dr. Neil Spector, I often think about the incredible nurses, attending physicians, fellows, technicians, and other staff who provided such compassionate care to one of their own during the final months of his life,” she wrote. “From those who kindly delivered his meals and those who carefully cleaned his hospital room daily, to those who delivered services in the areas of nutrition, social work, and pastoral care, to name a few, I am so grateful for your caring hearts, especially during such a turbulent and fearful time as we were all navigating the uncertainties from the pandemic.”

She described how, when the unit had to close to visitors due to COVID-19 concerns, the nurses would provide updates to the families by phone, somedays two or three times daily, which was extra time they had to carve out in their day on top of caring for their patients.

“The staff were such a cohesive group and much of this is likely due to their amazing nurse manager, Joey Misuraca, who is such a wonderful support and advocate for her staff, patients and their family members,” wrote Denise. “Thank you, Joey, for extending your kindness and advocacy to us during one of the most stressful times in our lives. As this is the year of the nurse, I especially want to acknowledge the dedicated oncology nursing staff on 9100 as they are the compassionate eyes and ears of the health care team day in and out and are so vital to the care and well-being of oncology patients and their families.”

Cell therapy and hematologic malignancies specialist Louis Diehl, MD, was the attending on service during Neil’s last stay on 9100.

“Neil won the teaching award given by the fellows several years ago and, as is the tradition, he gave the introductory lecture on the first day of the academic year at Grand Rounds. This talk is always about lessons learned,” said Dr. Diehl, a professor of Medicine with a four-decade career in oncology. “I did not really know Neil before that talk but at that talk I sat there mesmerized by the fact that I was hearing a giant who had been a hard charging, incredibly successful physician, scientist, and person, who was laid low by a terrible disease (Lyme disease) and rose up, fought and did it with grace and class. It was the kind of lecture you want to capture on tape and tell each new doctor, “This is what I want you to be.””

“Seeing Neil and caring for him in those final weeks was very different.  He was smart, insightful, calm (superficially) and gracious,” Dr. Diehl continued. “Each morning I would go in (usually alone) and would give him the data that was returning and then we would talk and together formulate the plan. Emotionally, the staff is always impacted by seeing a patient in these circumstances but even more so when it is one of our own. I sometimes think he would (figuratively) jump out of bed, put us in bed, and attend to our needs. In the end, he was all those things I saw back in that lecture years ago — physician, scientist, husband, and incredible person.” 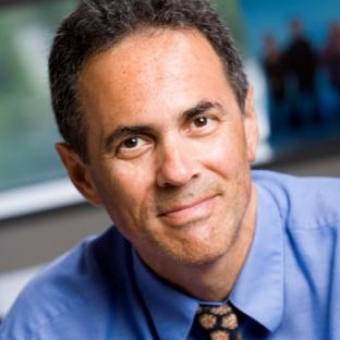 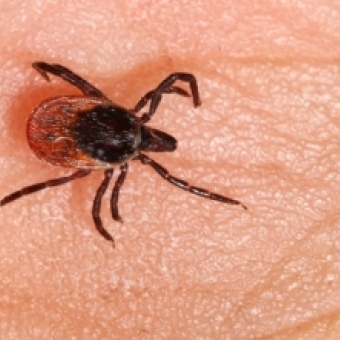 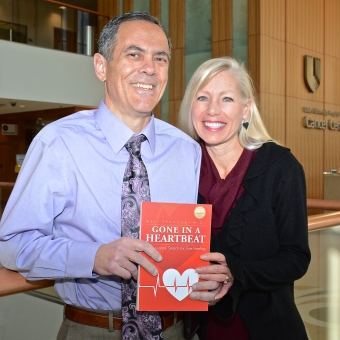 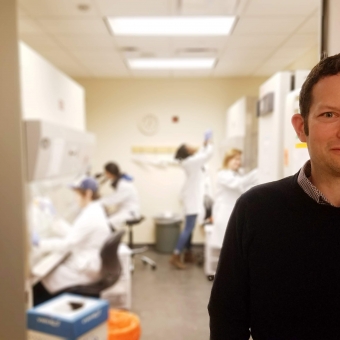 “I will never forget the compassionate eyes behind the masks of so many who touched our lives through their kindness during one of our most vulnerable times.”
— Denise Spector, PhD 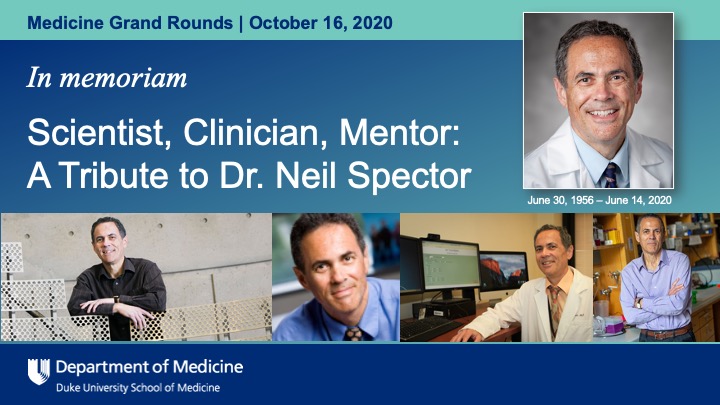 The Duke Department of Medicine will feature a tribute to the late Neil Spector, MD, for its Medicine Grand Rounds on Friday,Oct. 16 at 12 p.m. Diego Bohórquez, PhD, will be joined by others who knew Dr. Spector well. REGISTER