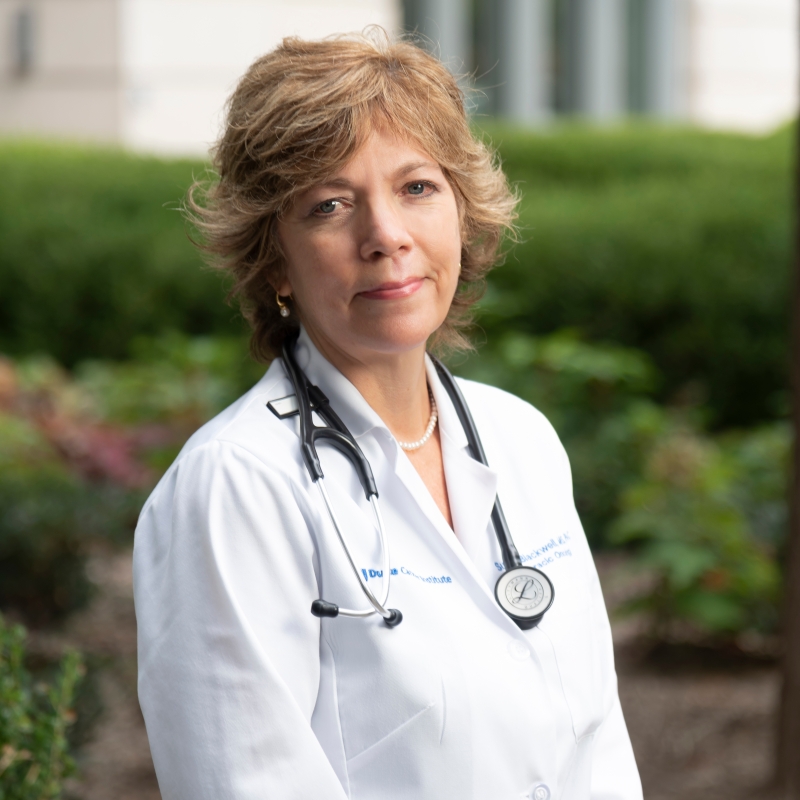 In a lot of ways, Susan Blackwell (Crawford), MHS, PA-C’89, and the physician assistant profession have grown up together. They were born at roughly the same time, matured in parallel and proximity, and for more than three decades they’ve been inextricably linked.

Blackwell grew up on her family’s farm in Caswell County north of Durham. The PA profession was born just to the south, at Duke, founded in 1965 by cardiologist Eugene A. Stead, Jr., MD, former chair of the Department of Medicine in the Duke University School of Medicine.

At the time, nurses and primary care physicians were in short supply, and Stead established a program to create a new position “to fill a gap between physician and nurse.” People in this new field, he said, would be trained in numerous areas of the medical profession. “We have chosen to call these individuals ‘physician-assistant’,” Stead wrote.

The program he created at Duke remains the best in the nation, perennially ranked No. 1 by U.S. News & World Report. Blackwell entered the program in 1987, graduated two years later, and has been a practicing PA at Duke ever since. This year — her 32nd on the job — the program honored her as the 2021 Distinguished PA Alumnus of the Year.

But the field was still a long way from what it is today.

“I can tell you a lot of stories about the way that PA practice has changed in the last 35 years,” reflects Blackwell. “My profession has had to work pretty hard toward being recognized.”

In the beginning, she notes, there was “a learning curve” as physicians, nurses, nurse practitioners, and physician assistants had to adjust their roles and expectations within the team. Patients also had to adapt. Blackwell remembers patients asking her when she was going to finish medical school and become a doctor. Now, most patients have grown accustomed to appointments with PAs and are familiar with the team approach.

“As a PA, I can bill, I can write orders, I can write prescriptions. I can do pretty much whatever is in the scope of my supervising physician as long as I work with him,” says Blackwell. “The idea is that we (as PAs) have an independent practice. It allows the faculty, the MDs, to see more new patients, do more in their research, and write clinical trials. As PAs, we provide a lot of extra boots on the ground.”

When Blackwell graduated, many of the open positions for PAs were in primary care, but Blackwell set her sights on oncology. There weren’t any PA openings at Duke in the Division of Oncology at the time, however, so Blackwell accepted an available position in the Division of Gastroenterology.

About six months in, Blackwell heard “through the grapevine” that then-Chair of the Department of Medicine Joseph Greenfield, MD, HS’57-’59, was bringing thoracic medical oncologist Jeffrey Crawford, MD, HS’77-’78, HS’82, from the Durham Veterans Administration Medical Center, to Duke to start a thoracic oncology program.

Crawford needed a PA, and Blackwell joined him and colleagues including Walter Wolfe, MD, HS’64-’72, and Robin Vollmer, AB’63, MD’67, HS’72-’73, in establishing the Thoracic Oncology Program at Duke. She’s been practicing in the Duke Cancer Institute’s (DCI) Thoracic Oncology Clinic ever since, treating with skill and compassion hundreds of patients with lung cancer while also helping advance the PA profession, particularly in oncology. She is the team lead for the medical oncology physician assistants and nurse practitioners in four of 11 DCI Disease Groups — Sarcoma, Thoracic, Head & Neck, and Melanoma — and she has co-authored papers in high-impact journals like Cancer Control and the Journal of Thoracic Oncology.

Now a veteran of the PA profession, she mentors Duke PA Program students who’ve chosen oncology as one of their electives. Blackwell says she has an “open door for anybody who has a question” about the work of a physician assistant, from new recruits to transplants.

And three decades in, she still loves the thing that drew her to become a PA in the first place.

“It’s all about patient care,” she says. “I love being in the room with patients and their families. Those bonds, those relationships you make — not just as patients, but as people — are so important. I still love that.”

This article was originally published on Dec. 8, 2021, in DukeMed Alumni News, Winter 2021

Extras from the Interview

“I was fortunate that when I was in PA school, Dr. Stead (founder of the PA program) was still alive. And when I was first working here, he would come every October 6, on National PA Day, to the Searle Center. And he would just sit and talk to all the PAs, and he always had lots of little pearls of wisdom," shares Susan Blackwell (Crawford), MHS, PA-C. "He would always say, ‘You can't know everything, you need to keep what's really important in your head and as for the rest of it … it’s important to know where to find the answers.’ I always tell the students, ‘Believe in what you've been taught, because you've been taught by the best and keep building on it. You never stop learning in medicine.’”

“I grew up here with a big lump on my finger from writing so much on the in-patient charts. Sometimes I’d really like to go back to 30 years ago, when we wrote everything by hand and had so much time to spend with the patient," says Blackwell.

She used to teach students in the Duke PA Program the art of taking handwritten medical histories from patients. No longer. Now, there’s an electronic medical records system, a tool she's adapted to.

“The young folks that are coming along — the PA students who are in clinic with me — their skills, managing all the technology, it’s like they're born doing it,” says Blackwell.

On Changes in Lung Cancer Care

Immunotherapy, the evolution of molecularly targeted therapies, less toxic chemotherapies, and advances in surgery and radiation oncology have all changed the calculus for many lung cancer patients, reflects Blackwell.

“These were the people who died from lung cancer very quickly and now we’re seeing people live a long time. There’s this big expanse of knowledge now and it gets bigger every day, which is wonderful for our technicians and mostly wonderful for our patients.”

From 2020-21, Blackwell served was a mentor — through the Duke Keep Exploring Program — for a Duke undergrad.

The program matches undergrad students with Duke professionals currently working in a field that the students are interested in.

“I just filled it out a survey from the program and next thing I know, I got feedback that there was someone who wanted to come and learn about being a PA and I said, ‘Okay, well great,’” says Blackwell. “We zoomed once a week and we talked about different things,"

They couldn’t meet in person because the student, Vivian, a junior at the time, was attending Duke remotely from her home in Texas due to the Covid-19 pandemic. When Vivian returned to campus last fall as a senior she helped guide her through the PA school application process — which Blackwell says is more competitive now than ever before. 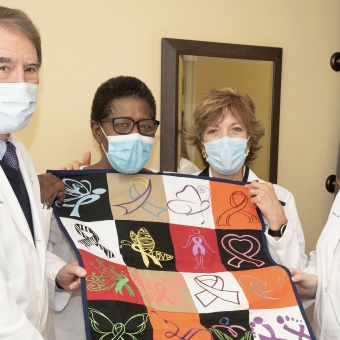 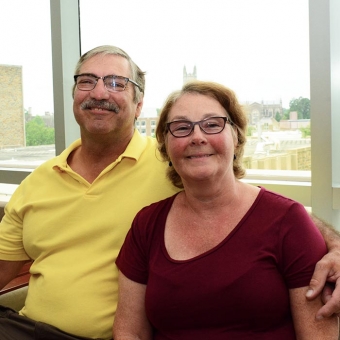 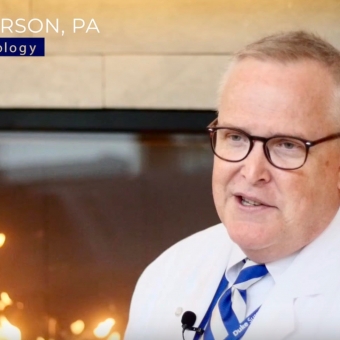 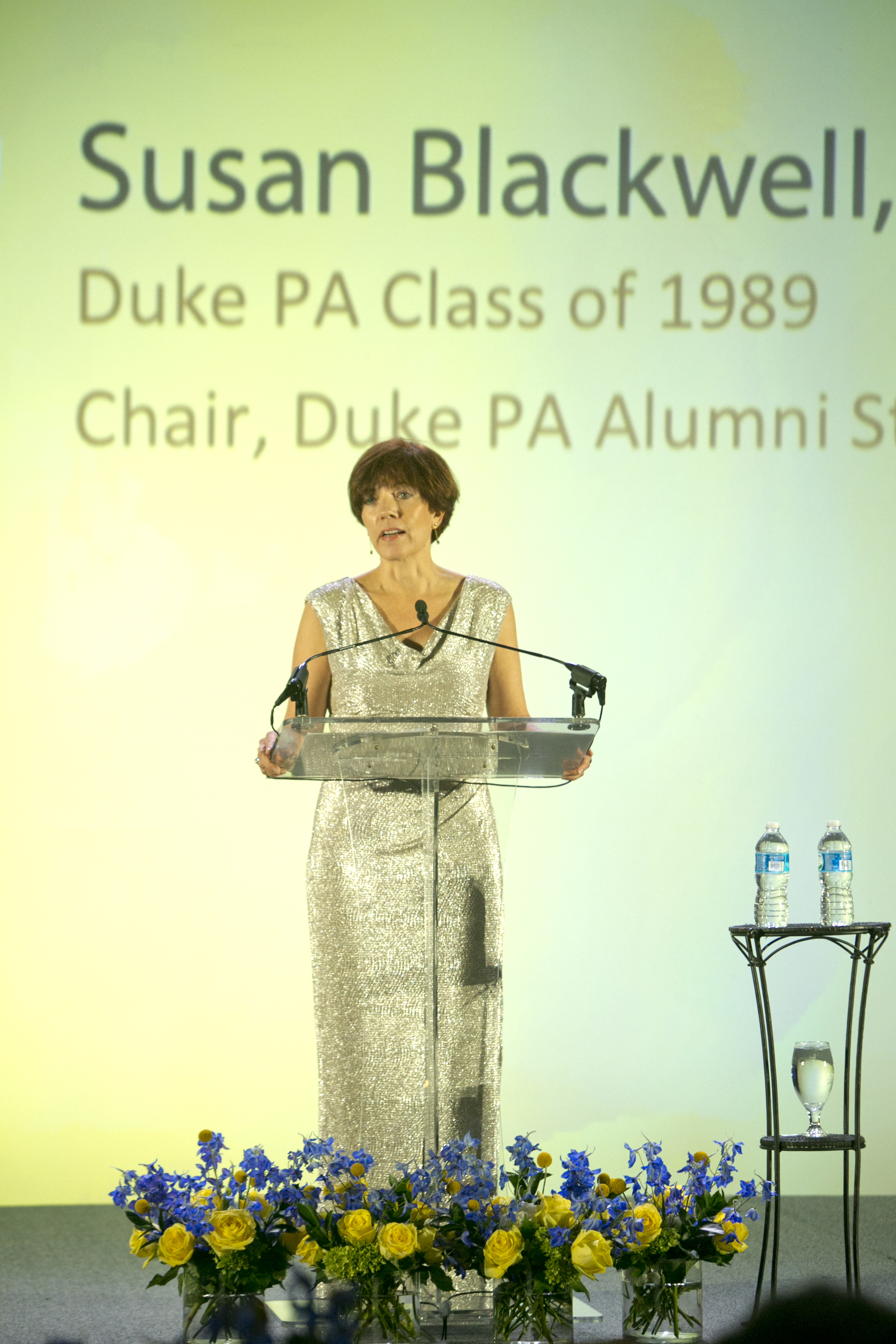