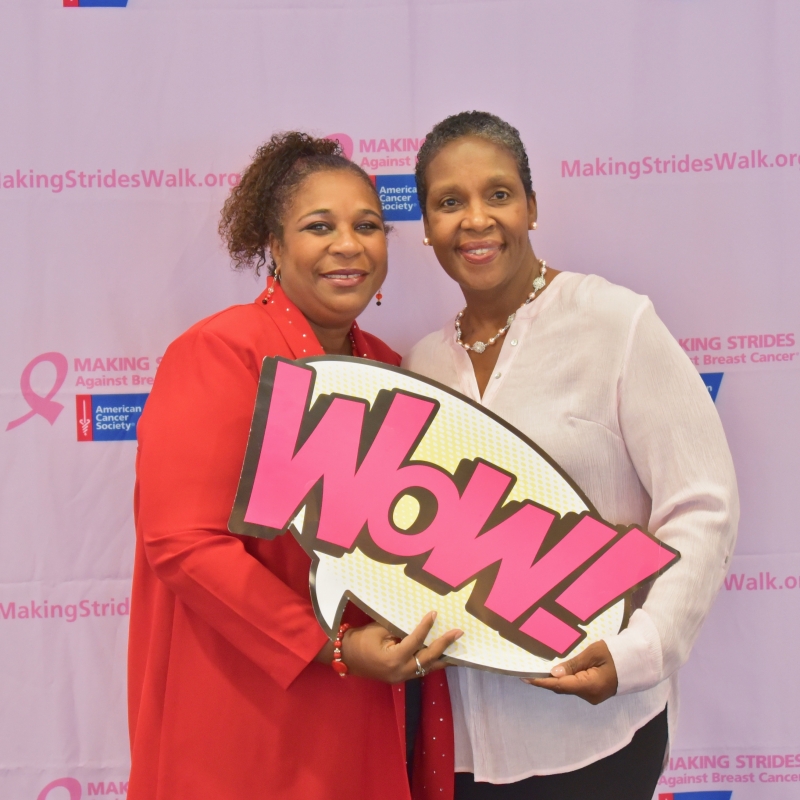 Tammy James, her head stylishly wrapped in a scarf to conceal her balding head, was leaving the infusion treatment room when she noticed a woman sitting in the waiting room just a few feet away. Her face was ashen and her eyes betrayed the worry and stress she worked hard to hide.

James, 59, halfway through her own treatment for stage 2 triple negative breast cancer, knew all too well the roller coaster of emotions that come with a cancer diagnosis. She walked up to the stranger, paused and smiled. Holding her gaze, James gently took the woman’s hand into her own and with a squeeze whispered, “We got this.”

“Her words were so convincing—so believable,” said Barbara Pullen-Smith, 60, who only days before meeting James was diagnosed with HER 2 positive breast cancer. “My husband and I sat there that day stunned and in disbelief. Tammy’s words were an answer to prayer.”

The two women exchanged phone numbers, and it wasn’t long before they were fast friends. They discovered they had much in common. Both were married—Pullen-Smith, for 36 years and James, for 26 years. The women each have two sons and both reside with their families in Garner, North Carolina. James and Pullen-Smith, who were treated at Duke Women’s Cancer Care Raleigh, see the same medical oncologist and radiation oncologist.

Being ahead in her treatment, James was able to coach Pullen-Smith through chemotherapy, a lumpectomy and finally, radiation therapy.

“Everything was foreign; everything was new,” shared Pullen-Smith. “The doctors and nurses really can’t prepare you unless they’ve had cancer. They can tell you what’s in the book—forget the book. Tammy’s firsthand experience made all the difference for me.”

Pullen-Smith, who had been journaling since she was a teenager, began to document her own experience through a series of “expressions.” Her journal entries became the genesis for a book. Perhaps by sharing her journey she could convey compassion and empathy and provide guidance to others newly diagnosed, she thought.

“I write about my pain and my passions—that’s how I express myself,” said Pullen-Smith, the founding director of the N.C. Office of Minority Health and Health Disparities in the Department of Health and Human Services. “Writing has helped me process and navigate my diagnosis, treatment and survivorship. I’ve put together a collection of my expressions that chronicle my journey from diagnosis to healing.”

Pullen-Smith’s book, “New Woman in the Mirror,” was released in September.

Although both women have now completed treatment and have been given the all-clear, they say the journey is not over.

“On the surface, we look fine,” shared James, who was able to see an early manuscript. “But a recurrence is always in the back of my mind. Barbara’s book is a helpful reminder that we are not alone—feelings of loss, fear, confusion and anger are shared by all us who after cancer see a new reflection in the mirror.”

In support of the annual Making Strides Against Breast Cancer walk, James and Pullen-Smith recently signed on to join Team

The women will step out for the event with team captain Gayle DiLalla, MD, a surgical oncologist at Duke Women’s Cancer Care Raleigh. DiLalla is also a member of the board of directors supporting the local chapter of the American Cancer Society.

The 2019 Making Strides Against Breast Cancer walk will be held Saturday, Oct. 19, at Midtown Park at North Hills, 2011 Cardinal St., Raleigh, North Carolina. Check-in begins at 7:30 a.m. The walk begins at 9:15 a.m. From Aug. 23 through Oct. 19, Pullen-Smith will donate a portion of the proceeds from the sales of her book to Team Duke Women’s Cancer Care Raleigh and the American Cancer Society.

Duke Cancer Institute will step out Oct. 19 for the 2019 Making Strides Against Breast Cancer walk. We invite you to join one of our teams: Women’s Cancer Care Raleigh, led by Gayle DiLalla, MD, or Duke Cancer Center Durham, led by Jennifer Plichta, MD, and Rachel Blitzblau, MD.

Author Barbara Pullen-Smith, PhD, is donating a portion of the proceeds of every book sold between Aug. 20 and Oct. 19 to the American Cancer Society's Making Strides Against Breast Cancer. To purchase "New Woman In The Mirror," visit barbarapullensmith.com.