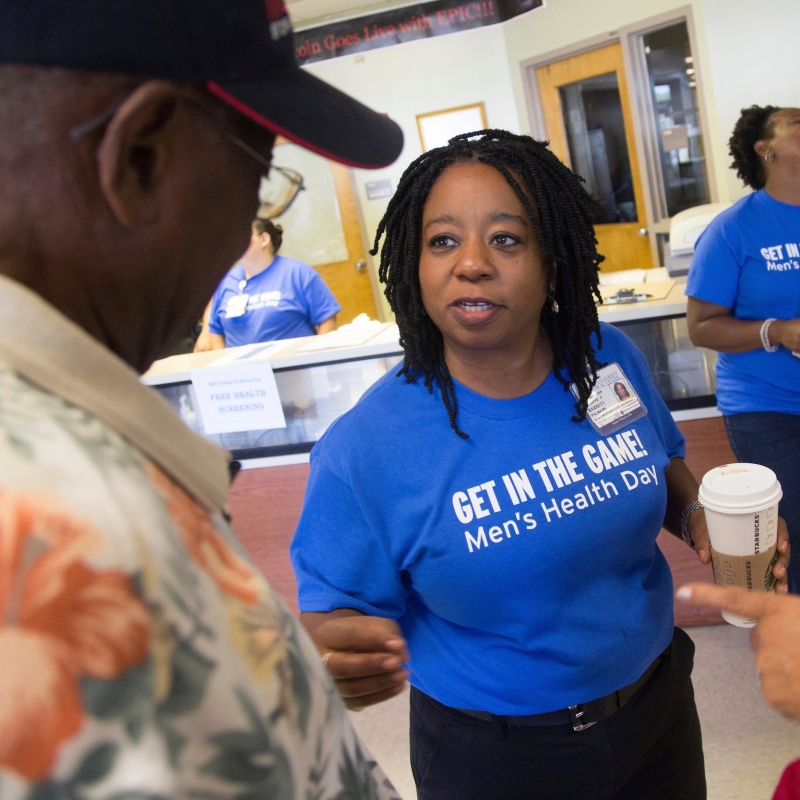 When Nadine Barrett, PhD, was 15, she and her mother traveled from their home in Wimbledon, England to New York City and ended up staying; making a home in Brooklyn. They were immigrants seeking “new opportunities to advance their education and career,” Barrett said, and undocumented.

“We lived in Wimbledon, and were of one the few black families in the area,” said Barrett. “I came to Brooklyn and saw so much diversity and a strong representation of black people, essentially, people who look like me in the community. I thought, “This is fabulous.””

But the novelty of a new life in America quickly wore off.

Barrett’s mom, who had been a district nurse in England, could not practice in the America because of her immigration status. As result, she had to initially accept low-paying jobs outside of her professional experience, until she received her green card and was able to practice as a geriatric nurse, a career she held for 30 years.

Barrett enrolled in Lafayette High School, which though integrated in the classroom, was far from integrated on the playground — “Italian white students on one side, black and Puerto Rican students on the other.”

With her very strong British accent, Barrett didn’t entirely fit in with either group, she said.

Barrett has traveled far — literally and figuratively — since those days in Brooklyn.

For 20 years, she’s worked to reduce health disparities among historically underrepresented populations by increasing their access to care and research; ensuring that diverse voices and perspectives are included as stakeholders that can influence and improve community and population health, and equipping health systems and researchers with tools, resources, and strategies to effectively engage these diverse populations in the development and full participation in healthcare and research.

About a third of that time has been spent at Duke. 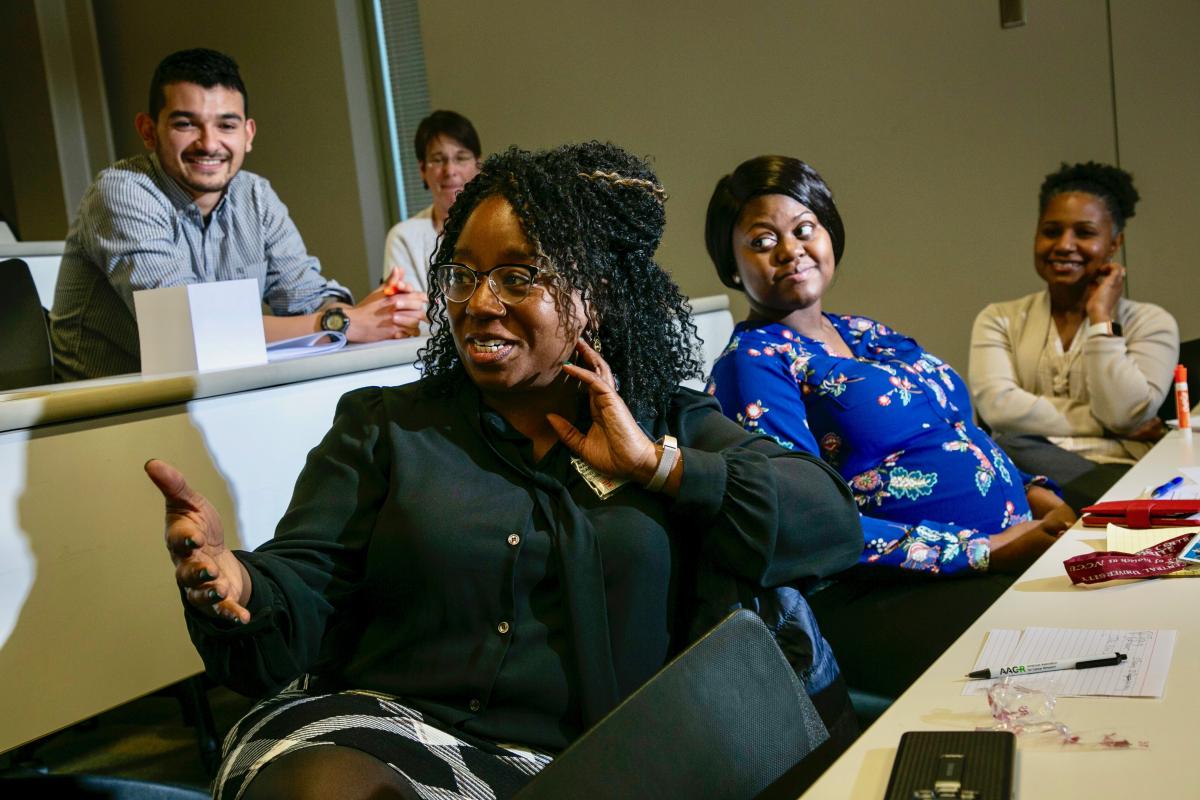 Nadine Barrett, PhD, (far left) engages with students and faculty at a mentor-mentee communications workshop for the second cohort of students taking part in the Duke/North Carolina Central University Cancer Research and Education Program. Barrett is co-director of that program. (photo by Chris Hildreth) While Barrett’s career path would draw on her experiences as a teen in Brooklyn, it wasn’t how she originally envisioned her future.

In high school, she’d had her heart set on becoming “the best actress.” She even got a role in an off-off-Broadway show — a comedic version of Cinderella — for which she got rave reviews.

But her mother preferred that Barrett, with her stellar grades and honors, go to college to pursue business management even as her guidance counselor at school, (which Barrett believes, with “obvious bias”) was pushing her toward retail management instead.

One school-day, Barrett’s mom woke her up and told her to get dressed in her Sunday best for an interview at Newbury college in Boston. She was accepted and enrolled at 17. About the same time, she and her mother were finally granted green cards to live in the U.S.

But two years later, when Barrett got ready to graduate with her associate’s degree, she was again encouraged to pursue retail management, so she tried it out —becoming even more aware of the depth and breadth of social inequality. In the absence of a real mentor, she said, she’d not been advised of other possibilities,

For three years she managed women’s specialty stores, while doing extensive volunteer work on the side, including at women’s shelters, food pantries, and other non-profit organizations. When nonprofit work became her true passion, she resolved to “dive in” and go back to school. She enrolled at University of Central Florida, where she fell in love with medical sociology; earning a bachelor's degree and her first of two master’s degrees.

Starting in high school, she had heard time and again that people are poor either because they don't work hard enough or because they're not taking advantage of the opportunities that are there.

“This glared in the face of my experience,” said Barrett, whose mother worked anywhere from two to three fulltime jobs at any given time, and had at that point already suffered the first of two heart attacks. “My first year in college was when I actually stepped back and reflected on our life in New York — including challenges in navigating the educational and health system — which mirrored that of so many other people of color in the U.S. That's what shaped my career focus in health disparities, which did not shift from that point on. I have no doubt that my mom's chronic health issues now are truly because of the inequality that she experienced, including not having access to healthcare.”

Barrett proceeded to earn an MS (her second master’s degree) in Community Health and Health Education in 2004 and a PhD in Medical Sociology and Race and Ethnic Relations in 2005 funded through the American Sociological Association Minority Fellowship Award— both at Texas Woman’s University.

As a PhD student, she developed a curriculum to address inequalities and bias called the Prism of Difference; testing it out in an intro to women’s studies and sociology graduate seminars and modifying and expanding it as her career developed.

“This was a powerful time for me as I saw my work start to make a difference in the lives of others as they examined inequalities across race, ethnicity, gender and income and began to reframe their understanding of the world and their actions with a different lens, a health equity lens,” she said.

Barrett went on to a postdoctoral fellowship at the University of North Carolina at Chapel Hill, funded by the National Institute of Mental Health, where she focused on health services research and health disparities.

In February 2012, Barrett joined Duke as an assistant professor in the department of Family Medicine & Community Health and inaugural director of Duke Cancer Institute’s Office of Health Equity whose mission it is to reduce cancer disparities and improve population health in underserved communities.

Early this year, Barrett moved from her long-time leadership role at OHE (during which time OHE received a national ACCC Innovator Award, and was noted for their community engagement and outreach programs) to serving as associate director of community engagement and stakeholder strategy overall for Duke Cancer Institute and the Duke Clinical & Translational Science Institute (CTSI). She’s also director of stakeholder engagement for REACH Equity and the Patient-Centered Outcomes Research Institute—funded EQUAL ACP study.

As part of her research portfolio, Barrett developed “Just Ask: Diversity in Clinical Research Training Program,” a one-year pilot study funded by the V Foundation for Cancer Research to educate oncology research faculty and staff on patient and community engagement, cultural sensitivity and implicit bias. It builds on Barrett’s original Prism of Difference curriculum and the outreach work DCI’s been doing with the local community for several years, and is part of a strategy to boost minority participation in clinical research and trials. Her vision is for this to be a national program.

Barrett is also a principal investigator, co-investigator or mentor on at least half-a- dozen other high-profile non-profit and NIH grants connected with health disparities. She serves on national boards and has won numerous awards.

She has a lot on her plate. One could argue she’s balancing many plates.

“I am involved in a lot of exciting programs and what’s most important is that they all circulate around my life’s passion which is to advance health equity,” said Barrett. "That makes it easier and worthwhile.”

Her best days, she said, are when things come together well for a patient that’s struggling and trying to get access to care and when community partnerships come to fruition to make a positive difference in health outcomes.

“I've seen multiple victories there,” she said. “And those days are always the ones that remind me why I'm here.”

The creativity of the young girl who wanted to be an actress is still at her core. Except now, her creativity is directed toward being a stakeholder strategist and health equity expert.

“Give me a problem within the realm of health equity or health disparities and I can bring together the stakeholders, the patients, the community, and come up with a strategy for what we need to do to solve it; and that's what I love,” she said.